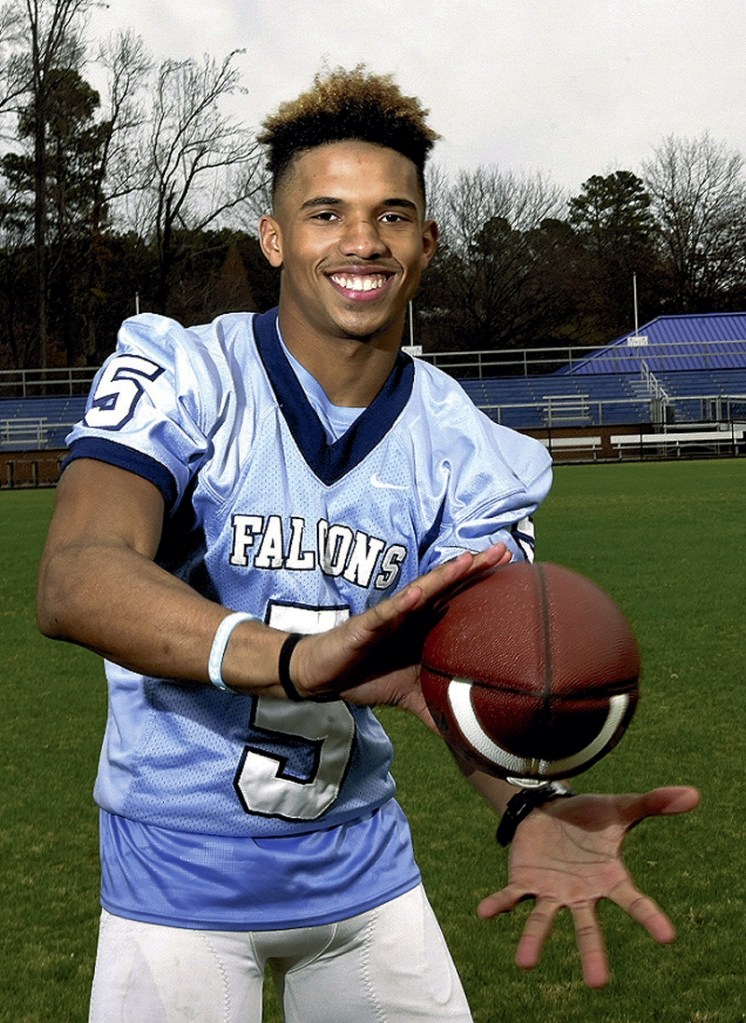 JON C. LAKEY/SALISBURY POST ... West Rowan’s Kortez Weeks was selected as the All-Rowan County Offensive Player of the Year. Weeks led the Falcons to the third round of the state playoffs and he was also rewarded with a spot on the N.C. Shrine Bowl team.

SALISBURY — West Rowan senior Kortez Weeks is the Rowan County Offensive Player of the Year, but all the preseason buzz was about the move of Weeks, the county’s finest receiver, to quarterback.
That decision made sense at the time. With quarterback Kacey Otto, the 2015 Rowan County Offensive Player of the Year, lost to graduation, coach Joe Nixon wasn’t sure he had anyone who could throw the ball to Weeks.
By shifting Weeks to QB, his most dangerous offensive weapon would be touching the ball on every snap and defensive coordinators were going to be tossing and turning through sleepless nights.
“I was willing to do it because you want to do whatever will help the team the most,” Weeks said. “I spent all summer preparing to be the quarterback.”
It was a large personal sacrifice Weeks was making because in two seasons as a varsity wideout he’d made 99 catches, 20 for touchdowns. He was a good college prospect, but not as a quarterback.
“We asked him to play quarterback and he put the team above himself,” Nixon said.
For two games of his senior year, Weeks was the QB.
He was decent enough against Mooresville on opening night, completing 11 passes, one for a touchdown. West’s defense keyed a 12-8 victory.
But the following Friday brought a discouraging 41-0 loss to Davie County. Weeks had minus rushing yardage and completed only six of 20 aerials. The Falcons went back to the drawing board during their open week.
Give Nixon credit because he started over offensively.
Give offensive coordinator B.J. Sherrill, the former West QB, credit because he worked wonders in a brief time frame.
“B.J. told Coach Nixon that he could get (sophomore) Stolsworth ready to play quarterback, that he could coach him up,” Weeks said.
When the Falcons returned to action two weeks after the Davie debacle, the opposition was furnished by Robinson, the team that would go on to win the South Piedmont Conference championship. West beat the Bulldogs, 21-19. Stolsworth was ready. He completed 20 passes. Weeks caught 10 of them for 141 yards and two touchdowns.
Weeks was again a receiver — and the rest is history.
“Korty had a great year,” Nixon said. “His worth ethic from the end of last football season through this season was tremendous. He was a great player and he was a great teammate.”
This is only the fifth time that a receiver has won the Post’s Rowan County Offensive Player of the Year and the first time since East Rowan’s Nick Heard in 1997. Weeks is the first West receiver to win the award since Donald Gray in 1983. Weeks’ season, even with zero receiving yards in those first two games, was outstanding. He had 67 catches for a school-record 1,307 yards and a county-record 19 touchdowns.
He played 12 games at receiver. He had at least one TD catch in 11 of them.
He finished second in county history in career receptions (172), second in TD receptions (39) and third in receiving yards (2,806).
Weeks is 6-foot-1, 175 pounds. He has 4.6 speed and a 36-inch vertical jump. He’s also strong for his size.
“When the ball is in the air, he goes up and gets it,” Nixon said. “He runs great routes and he makes big plays. He finds ways to get open even when he’s double-covered.”
Weeks had five touchdown catches of 50 yards or more, including an 80-yard scoring play in the win against perennial state champ Crest in the second round of the 3A playoffs.
Weeks was named Co-Offensive Player of the Year in the SPC and was a late addition to the Shrine Bowl roster. He caught three passes in North Carolina’s victory in Spartanburg, S.C.
“I couldn’t have asked for any more from this season,” Weeks said. “I worked hard on my routes and my timing every day. I tried to the best job that I could.”
He did his job well enough that the county has a new record-holder for TD catches in a season.
“That means a lot to me,” said Weeks, who is now competing in basketball for the Falcons.
Weeks is being recruited by a number of Division I and Division II schools. Some like him as a receiver, while others prefer him as a defensive back. He had a pass interception against Crest.