Breakfast with Santa at Clancy Hills 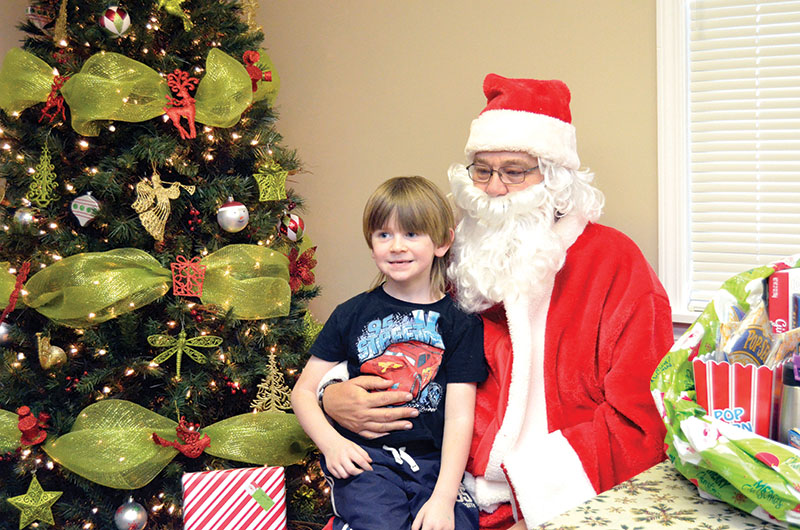 Eli Hutchins, 5, sits on Santa's lap after having breakfast at Clancy Hills Apartment complex. Residents had breakfast and their children received a gift during the Thursday event. Photo by Shavonne Walker, Salisbury Post.

SALISBURY — Sheree Hutchins sat across the breakfast table from her 13-year-old daughter, Jade, and beside the rest of her family — sons Malachi, 11, and Eli, 5, and boyfriend Daniel Christian.

It had been a while since they were all together for a meal, Hutchins said.

The family broke bread this week with the staff at Clancy Hills Apartment complex for its annual Christmas gift-giving event. The company that owns the complex, Westminster, provides a budget and property managers Vicky Richer and Shelby Marlin start shopping and searching for sales in August after National Night Out.

The pair will shop for any child whose parent or guardian signs them up.

This year, they decided to invite Santa Claus to give out the toys. The children and their families also enjoyed breakfast with the jolly one.

Each year, the staff gives presents to the children, but this year was the first time Santa was invited.

“I’m overjoyed, overwhelmed. It’s amazing to get our family back together,” Hutchins said.

She said just being able to move to Salisbury and at Clancy Hills was a blessing to her family.

“They care so much,” she said of the Clancy Hills staff.

Hutchins said she’s in awe and noted the staff goes above and beyond.

“It’s the best Christmas present for me to have my family under one roof,” she said.

Richer said they provided breakfast for 75 to 100 people. The group began at 7 a.m. and served breakfast until 1 p.m.

She said they’ve been providing Christmas presents since at least 2011, when Westminster took over ownership of the property.

Richer said they enjoy being able to give the children something for Christmas.