Panthers’ Kuechly: No plans to retire after second concussion 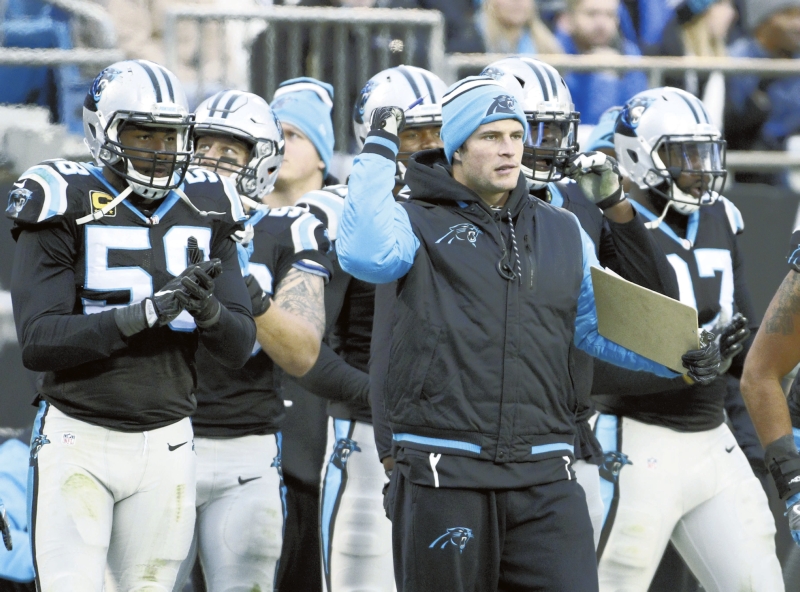 FILE - In this Dec. 11, 2016, file photo, Carolina Panthers' Luke Kuechly, center, cheers on his team in the second half of an NFL football game against the San Diego Chargers in Charlotte, N.C. While Kuechly desperately wants to play again this year, Carolina Panthers coach Ron Rivera is hesitant to risk putting him on the field and having the Pro Bowl linebacker risk another concussion. (AP Photo/Bob Leverone, File)

The Panthers three-time All-Pro middle linebacker said Wednesday he has no plans to retire from playing football after his second concussion in as many years.

The 25-year-old has missed seven games in the past two years with concussions, including the last four this season.

Kuechly said that while he appreciates the overwhelming concern friends around the league and family have for him, “I’m holding off that retirement word for probably a little ways down the road. … Whenever my opportunity comes back, I will be back out there.”

Unlike teammate Cam Newton, who expressed some fear earlier this season after his concussion, Kuechly defiantly said he’s not concerned about the long-term effects of concussions, which had been linked to Chronic Traumatic Encephalopathy (CTE) in football players.

“I’m not worried about (CTE) and I think there is a lot to be learned from it,” Kuechly said.

Kuechly was cleared by independent physicians to play Monday night against the Washington Redskins, but head coach Ron Rivera erred on the side of caution and held him out for at least another week.

Rivera hasn’t decided if Kuechly will play against Atlanta on Saturday, or again this season.

“He wants to play, but I have told him that I have a lot of things to weigh,” Rivera said.

The Panthers (6-8) have a minuscule shot at making the playoffs.

Kuechly has four years remaining on a six-year, $62 million contract he signed in 2015.

The team’s first-round pick in 2012, Kuechly was injured on Nov. 17 following a collision with New Orleans Saints running back Tim Hightower.

What followed in the moments after was a frightening sight in age of increasing concussion awareness as a national television audience saw Kuechly weeping uncontrollably and staring blankly ahead into the distance as he was driven on a cart to the locker room.

Kuechly would not answer questions about his reaction that night.

The linebacker hasn’t played since sustaining the concussion, although he continues to practice every day. He had hoped to be back on the field by now.

Part of that might have been the optimistic Rivera first had.

Rivera initially told reporters a couple of weeks ago that he would play Kuechly when he was cleared by independent physicians, but then did an about-face over the weekend by saying Kuechly wouldn’t play against the Redskins.

“I know a couple of weeks ago I was talking about if he’s ready to go, we’re going to roll him out there,” Rivera said. “But I’ve got a lot of things to think about. I’ve got to make the decision that is going to be best for him and this organization going forward. I have to not make just the right decision, but the prudent decision. It’s important we make very good decisions.”

Kuechly, praised by defensive coordinator Sean McDermott for his high football IQ, has spent the last four games on the Carolina sidelines holding a clipboard and playing the role of assistant coach.

He’s been very active on the sideline calling out assignments, teaching younger players and celebrating with teammates after big plays.

“The great thing that he has done best is he has stayed involved in everything that we do,” safety Kurt Coleman said. “He’s the ultimate teammate. Whether he’s playing or not playing, he’s so focused on the details and he’s helping everyone around him whether he’s on the field or not. He’s not letting the situation take away from the team.”

Kuechly said he wants to play as soon as possible, but also realizes that team has input on the decision.

“They’re the boss and I have to listen to what the boss says,” Kuechly said. “Whatever they decide is going to be the plan and we’ll see what happens.”

Kuechly was selected to the Pro Bowl, but hasn’t decided if he’ll play in the game.

The Bears decided not to activate the third-year pro before Wednesday’s deadline. They had a 21-day practice window to evaluate him.

A first-round draft pick in 2014, Fuller had arthroscopic surgery in the preseason and went on injured reserve in late September. He says he still feels pain and expected a quicker recovery.

Fuller says he believes he is in the team’s plans for next season.

, though he hasn’t gotten any indications from general manager Ryan Pace. He also responded “yes” when asked if he wants to remain in Chicago.

Fuller was drafted by former GM Phil Emery for a 4-3 defense. The Bears use a 3-4.