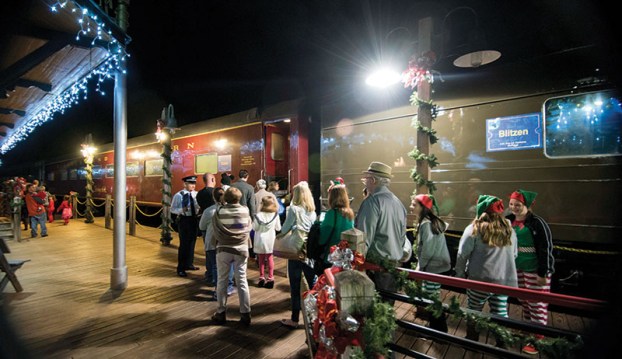 JON C. LAKEY / SALISBURY POST file photo The Polar Express rolled back into town for the holidays at the North Carolina Transportation on the weekend of Nov. 18. The wildly popular event was expanded to include two trains take the pajama-clad passengers to the North Pole to visit Santa Claus. The event drew people from all around the area and was beneficial to the local economy.

SPENCER – In its third year, the “Polar Express Train Ride” has quickly become a holiday season staple for families in Rowan County and beyond.

The event sold out last year and did the same this year, with more than 30,000 tickets sold, according to a press release. Part of the success has been thanks to a partnership between the North Carolina Transportation Museum and the Rowan County Convention and Visitors Bureau to bring visitors from out-of-town and entice them to stay in town for a while.

The “Polar Express Train Ride” is inspired by the movie version of the book “The Polar Express.” Families can ride the train to the North Pole set to music from the movie’s soundtrack. There’s hot chocolate, cookies, singing and dancing and a reading of “The Polar Express” book.

Santa Claus presents the first gift of Christmas once the train arrives at the North Pole and everyone gets a silver sleigh bell on the return trip.

Each production brings 125 staff, volunteers and actors produced by Lee Street theatre to the “Polar Express Train Ride” site. Almost 250 people work to bring the event to Spencer, according to a press release.

In 2014 the NC Transportation Museum won a “Best Performance” award and won a “Best Marketing” award in 2015 from Rail Events, Inc., the licensing company.

To help market the event, the museum puts out some print advertisements but they focus on web marketing through their website, Facebook and email blasts.

Alexander said social media has been a very successful way to get the word out.

“That’s a really strong way for us to reach the market,” she said.

Alexander said she wants the event to be a fruitful fundraiser for the museum, but she also hopes it can help the county as a whole.

“I hope that (the event) means that the museum is being successful in bringing people here from all over the region,” she said.

Alexander said the event has been drawing people from southwest Virginia, eastern North Carolina and from other places that are more than two hours away.

And when visitors have a good time at the “Polar Express,” they’ll want to come back for other events at the museum, Alexander said.

Similar incentivized hotel event packages have been offered to other local tourism partners for three years to help increase overnight stays in Rowan County. The packages are offered to the Transportation Museum for other events, as well as Lee Street theatre, Piedmont Players, Historic Salisbury Foundation, LandTrust of Central N.C. and Downtown Salisbury, Inc.

James Meacham, CEO of the Visitors and Convention Bureau, said the hotel event packages gives visitors a chance to have a mini-vacation.

“It’s creating a package experience which provides value,” he said.

And it’s all working. According to a press release, more than 400 local hotel room nights were booked because of the package. The county has experienced a 17 percent growth in hotel market revenues and overnight visitor spending for the month of December since the “Polar Express Train Ride” started in 2014.

This year, the event is projected to have a $3.1 million overall economic impact to the county, including tickets, lodging, meals, merchandise, labor costs and event production.

The increase in the number of hotel rooms booked is also great for the hospitality sector, Meacham said. That translates into funds for the Convention and Visitors Bureau since the organization receives its funding from the hotel occupancy tax and not from any municipalities or the county.

Alexander said the event has helped solidify the railroad heritage of the area. The revenues gained have helped the museum upgrade its facility and provide more and improved programs for visitors. It has also brought jobs to companies working with the “Polar Express.”

She said she is proud of everyone involved with making the event a success, including all of the volunteers, staff and community partners.

For Alexander, the most important thing is creating memories for families and fostering a life-long love for railroading, trains and the museum.

“We’re making memories, that’s what we tell everybody here every night…” she said. “That’s a pretty neat feeling to know that.”

By Josh Bergeron josh.bergeron@salisburypost.com SALISBURY — With the widening of I-85 scheduled to start next year in Rowan County, a... read more