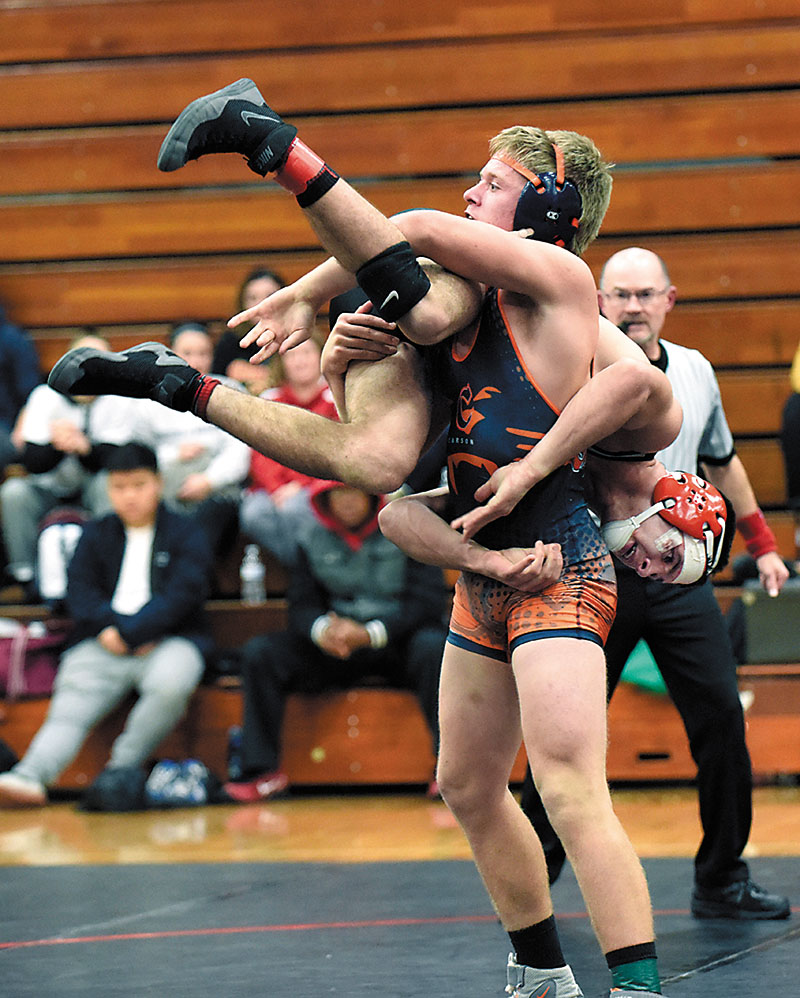 LANDIS — Saturday’s Rowan County Wrestling Tournament resembled one of those suspense-filled dramas where the surprise outcome isn’t revealed until the closing scene.

It took that long for Carson to complete an Oscar-worthy comeback and capture its second championship in three years.

“A lot of our matches seem to wind up right there, at 220 and heavyweight,” first-year coach John Kincaid said at South Rowan High School, where Carson crowned six weight-class champions and outpointed the host Raiders, 170-166, for the title. “Today those guys came through. This shows that dedication and hard work and off-season training pays off.”

Defending champion East Rowan (122) finished third in the team standings, followed by Salisbury (120), West Rowan (118) and North Rowan (62). Carson — which lost a close SPC dual match against SR earlier this month — took a difficult path to a beautiful destination, rallying from 19 points down and breaking the hearts of South’s faithful supporters.

“All we had to do was win in the finals,” South coach Nick Golden explained, “and not go to our backs and get pinned.”

Instead, the Cougars won all four head-to-head match-ups with South in the finals and snapped a 166-166 tie when 220-pound senior Dequann Simms earned a 5-2 decision over Jeffrey Woodward in the tourney’s next-to-last bout. That match was squared 2-2 entering the third period before Simms used an early escape and a late takedown to prevail.

“We all got together before the finals and talked about how to execute our moves,” Simms noted. “We talked about keeping it simple. I was gassed (after two periods) but knew if I could just get a standup point my team would be in good position.”

Golden indicated that Woodward, a junior, may have been a little star struck. “It was his first time in the finals,” he said. “He doesn’t have a lot of experience. But you’ve got to know what to do in crunch time, when it’s time to go for broke.”

“We figured it could go either way,” said Bailey Rayfield, a senior who edged South’s Michael Sloop 2-1 in overtime at 160. “We had to win those head-to-head matches. That was our mindset going in and we did exactly what we needed to.”

Kincaid began thinking championship after Carson’s Austin Cain recorded a third-period pin against Salisbury’s Nick Austin in the 172 final. “That made four in a row,” he said. “Austin’s pin was an accomplishment because you get bonus points for pinfalls in the finals. Bronson’s the one who got it started — and once that momentum swings your way it pumps guys up, fires them up. It makes you wrestle twice as hard.”

Cameron Rayfield improved to 12-1 this season with an 11-0 major decision over South’s Eli Johnson. “I knew the team scores were close,” he said. “So I was super nervous. But I went out and wrestled my best match of the year.”

It all came down to Simms and his third-period fortitude against Woodward. He opened it with a quick escape, then grappled like a seasoned veteran until 25 seconds remained, when his takedown earned him a first-place ribbon — and his team the championship trophy.

“It was close,” Simms said. “(Woodward) kept trying to shoot in because he was desperate and needed a takedown to win. I stuck to the basics, sprawled out like I was supposed to and got around him for two points.”

They were two points that seemingly told the entire story.

“Anytime you’re in the finals and it’s close, you’ve got nots in your stomach,” Kincaid said. “Of course I was nervous. If you’re not, you’re not a coach.”

Bailey Rayfield — a repeat champion — improved to 10-2 by beating Sloop in overtime for the second time this month. But he was more pleased about winning MVP. “It’s amazing,” he said afterward. “I’ve been blessed to win a championship before, but never MVP. It reminds me of eighth grade, when my brother beat me out for the middle school MVP. Now I’ve got one too.”

South placed seven wrestlers in the finals, but only 120-pound freshman Logan Lambert took home a blue ribbon. “That kid’s crazy,” Golden said after Lambert pinned East’s Levi Peterson in 1:22. “He comes to our practice, leaves and goes to another practice. He lives for wrestling.”