A devoted Ford man hits the road for Meals on Wheels 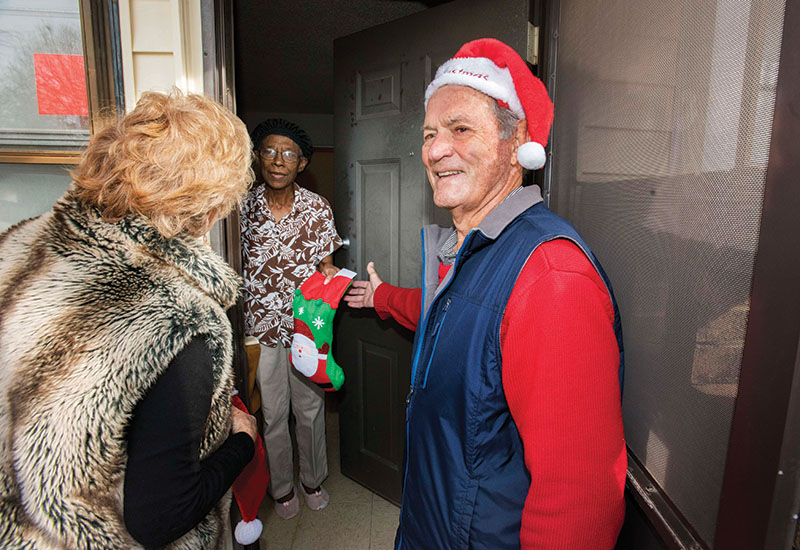 JON C. LAKEY / SALISBURY POST J.C. Ritchie, 92, (right) and Darlene Ball (left) work together to deliver Meals on Wheels to shut-ins on a Salisbury route. Myrtle Walton was given a stocking with some goodies along with her meal. Ritchie and Ball picked up some stockings at the dollar store and filled them with small items as a Christmas treat for the meal recipients. Thursday, December 15, 2016, in Salisbury, N.C.

SALISBURY — J.C. Ritchie never drives anything other than a Ford — the reason will become obvious later — and he bases his model selections on how many bags of golf clubs he can carry in the trunk.

Right now, Ritchie owns a top-of-the-line Taurus, and Thursday was his day to drive Route No. 2 for Meals on Wheels and deliver lunch to about a half-dozen apartments and homes in Salisbury.

You’d never know it, but Ritchie is 92. Still golfing, he recently recorded his 10th hole-in-one, and for the last 20 to 30 times out — he has lost count — Ritchie has shot his age or better on the course.

“When you get as old as I am, you should be able to shoot your age with a putter,” Ritchie says.

Ritchie and his good friend, Darlene Ball, donned Santa hats Thursday, and Ball served as a human GPS in guiding Ritchie through the streets to each stop.

“Good, you’re so efficient,” Ritchie told Ball as they glided into a parking space for one of their deliveries.

They saw a couple of residents at the Yadkin House apartments, a lady on East Cemetery Street, a few more folks in public housing units off Lafayette Circle, and their last two stops were on Reeves and Earnhardt streets.

Darlene read a note attached to the directions for one of the houses: “Mrs. Wagoner has asked you not to park in her front yard. You might get stuck.”

On Reeves Street, the resident was not home, but she had left a bag attached to the front door knob with a note asking that her meal be slipped inside

The night before their Meals on Wheels duty, Ritchie and Ball went shopping. With every meal and newspaper they dropped off Thursday, the Ritchie-Ball team also handed out a Christmas stocking filled with things such as knit hats, gloves, scarves and Christmas candy.

Floyd, Joyce, Myrtle, Gary and other recipients thanked them heartily.

Ritchie and Ball are members of St. Luke’s Episcopal Church, which makes deliveries for Meals on Wheels on the first and third Thursdays of the month. Nan Medley coordinates the 25 or so people who volunteer for the church, and they pick up their lunches at the Meals on Wheels headquarters on South Salisbury Avenue in Spencer.

Some of the menu items Thursday were hamburger steak, spaghetti and meatballs, beans, broccoli, fruit and rolls. “It looks pretty good,” said Ball, who is chairwoman of Catawba College’s Board of Trustees.

The meals are prepared by Executive Chef D’Andrea Lawson and her Divine Appetit Co., also the food contractor on the Hood Theological Seminary campus. Meals on Wheels Coordinator Sandy Combs said the organization delivers an average of 220 meals a day throughout Rowan County.

Ritchie and Ball first worked together several years ago on a Habitat for Humanity house being built by church volunteers. Ball, wearing a tool belt, waded into a group of Ritchie and four other guys, and one of them said, “What’s that woman doing out here?”

They soon found out. Ritchie has wielded a hammer on several habitat homes, usually working during the week when it’s not always easy for others to attend.

“I do some,” Ritchie said, “but I don’t work on roofs or ladders anymore. I’m a ground man.”

Ritchie — the “J.C.” stands for John Calvin — is a 1941 graduate of Boyden High School in Salisbury. He went off to N.C. State University to pursue a civil engineering degree, but World War II soon consumed the country’s mindset.

One night, Ritchie was among 12 fraternity buddies sitting around discussing the state of world affairs and recognizing it was just a matter of time before they would be drafted.

“You know, they’re going to get us, men,” Ritchie said.

They decided that night it might be best for them to enlist in the Army Air Corps and learn how to fly. Who knows, they agreed among themselves, at first it might mean the difference between eating out of a can and dining in a cafeteria.

“We all hustled out Monday morning to the recruiting station,” Ritchie says. Those N.C. State friends ended up being sent everywhere in the world. Ritchie lucked out for a time, going to Miami Beach and being set up in a hotel dormitory.

But there also were those times piloting open-cockpit, single-engine planes in the dead of winter in Arkansas. Ritchie earned his silver wings as a pilot and was commissioned as a second lieutenant on June 27, 1944, at Spence Field in Moultrie, Ga.

It also was in Moultrie just days later, before Ritchie was anticipating being sent to Richmond for gunnery school, that he married Sybil Dorsett at the Spence Field chapel. Rosalie Armstrong of Salisbury was Sybil’s one attendant, and Lt. Henry Sackman of Brooklyn, served as J.C.’s best man.

A.D. Dorsett Sr. made the trip to give his daughter away. As Ritchie remembers it, 15 couples were married that day at Spence Field. He had collected sabers with which he planned to form a saber arch for the wedding, but Ritchie said he made the mistake of holding a beer party with his Army Air Corps friends the night before the nuptials.

“They thought they were taking a course in swordsmanship,” he said, laughing and shaking his head.

After the war, Ritchie came back to work for A.D. Dorsett Sr. at City Motor Co., the Ford dealership in town. It started J.C.’s long, rewarding career in the automobile business, as he learned pretty much  every facet of the dealership and every detail about Fords.

By 1963, he was general manager and treasurer. By 1972, Ritchie and A.D. Dorsett Jr. had purchased City Motor Co. In 1985 the dealership was sold to Larry Cloninger, and Ritchie was out of the Ford business.

But he’ll never be out of a Ford.

Volunteering and being involved in the community comes as second nature for Ritchie, who long ago was delivering Meals on Wheels with Sybil, who died in 2010.

He and Sybil headed the community Cancer Crusade in 1978. J.C. once led the United Fund campaign and was president of the Rowan Rotary Club. He also belonged to the Sales Executive Club, the Chamber, the Civitan Club, the Salisbury-Rowan Merchants Association and the Harold B. Jarrett American Legion.

He is a past secretary of the N.C. Automobile Dealers Association and was a member of the Wachovia Bank Board.

So J.C. has known a few people. All those associations and just being an uncommonly nice guy combined to help J.C. immensely in the car business but more in just life itself.

In delivering two meals to their last house on Earnhardt Street Thursday, Ritchie and Ball met the residents’ caretaker Leona Graham at the door, and after chatting for a while, J.C. ended up giving Graham his Santa hat.

For Ritchie, it was just another satisfied customer.