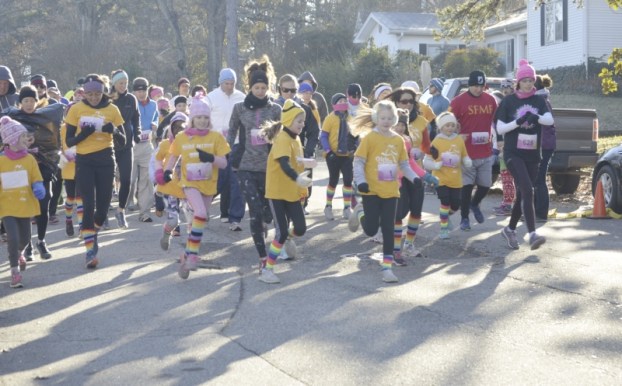 Over 500 girls participated in Saturday's Girls on the Run 5K with their parents or buddy runners in bitter cold temperatures. The non-competitve race culminated a 10-week curriculum at their respective schools. The runners were from both Rowan and Iredell counties. Shavonne Walker/Salisbury Post

Laurels to Girls on the Run, the organization that brought more than 500 girls to Salisbury last weekend for an end-of-the-season 5K race. Much more than a running group, Girls on the Run inspires girls in grades 3-8 to recognize their inner strength and recognize what makes them unique. Fitness and activity play an important role; the program also involves girls in dynamic discussions and community service. From one school program in Charlotte, Girls on the Run has grown to 225 councils in 49 states and the District of Columbia. As one coach said last Saturday, the program teaches girls that they can do whatever they set their minds to, and that “you have to start somewhere and you have to keep going” — good lessons for life.

Dart to the tactics that got used-car dealer Auto House in trouble. Consumers complained about marked-up prices, false labels, bait-and-switch tactics and cars with undisclosed damages. The business eventually admitted that it replaced the emblems on cars with emblems from more expensive models — after, their lawyer says, they upgraded the cars. The company reached a settlement agreement with the Department of Motor Vehicles that bars owners Samuel Ketner and Nathaniel Brown from being involved with any motor vehicle dealership in North Carolina in any way — not even as a shareholder. And to think, they were in the process of expanding their business. Those who filed complaints with the state deserve kudos; by stepping forward, they helped prevent others from falling prey to Auto House’s tactics.

Laurels to teacher Anthony Johnson, who instills valuable lessons in his students after learning them the hard way himself. Growing up in New Orleans, Johnson failed four grades in school. Fortunately, that did not turn him off to education forever. Later in life he saw an opportunity to prevent other children from falling through the cracks the way he did, and he stepped up to the challenge. Now Johnson is the Rowan-Salisbury Teacher of the Year and the Southwest Regional Teacher of the Year. More important, though, he is teaching science and social studies to fourth- and fifth-graders at Isenberg Elementary in a way that excites and involves them. “Johnsonville,” his classroom, is a place where they want to carry out the work spelled out on business cards Johnson distributes at the beginning of the year: “Occupation: Student.” Maybe he will inspire some of them to someday carry a card that says “Occupation: Teacher.”