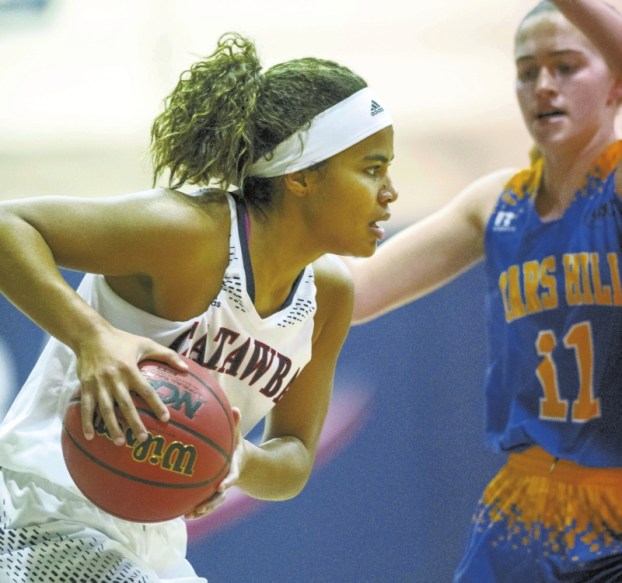 Catawba women get 41 from Johnson, but fall at Carson-Newman

A short-handed Catawba team was playing without leading scorer and rebounder Terri Rogers, who missed the game with an injury.  The Lady Indians are also still missing Morgan Franklin and Elizabeth Webb and played just eight people last night.

Johnson kept the Lady Indians in the game with her record performance.  She hit on 12-of-17 field goals and went 16-of-19 at the line.  The 16 made free throws set a new school record which was previously held by five players with 13.  Danyel Locklear is the other Catawba player that reached 41 points, doing so in 2003.

The Lady Indians fell behind, 21-8, midway through the first quarter, but battled back to within 40-37 at the break as Johnson tallied 19.  Johnson gave Catawba its lone lead at 51-50, on a pair of free throws with 4:51 to go in the third quarter.

Carson-Newman scored the first seven points of the fourth quarter to go up 64-54.  Kailyn Brooks opened the frame with a three-pointer and added a jumper before a layup by Kaitlyn Cupples.  A three-pointer by Tori Griffin put C-N on top 79-71 with 1:42 left before one last Catawba run.

Johnson hit two free throws, then a layup after an Eagle turnover to make it 79-75 with 57 seconds remaining.  Following another C-N turnover, a layup by Toni Tucker pulled Catawba within two points with 43 ticks left.  Carson-Newman was able to score on a layup by Haris Price with 16 seconds left and Price added two free throws after a Catawba miss to ice the game.

Alexis Newbold scored 11 points for Catawba and Madison Hallman, playing her first game of the year after a preseason injury, added 10.  Mika Wester had a double-double of 20 points and 10 rebounds for Carson-Newman.  Price picked up 17 points and Brooks added 14.

Catawba travels to Anderson on Saturday for a 2 pm tip with the Trojans.