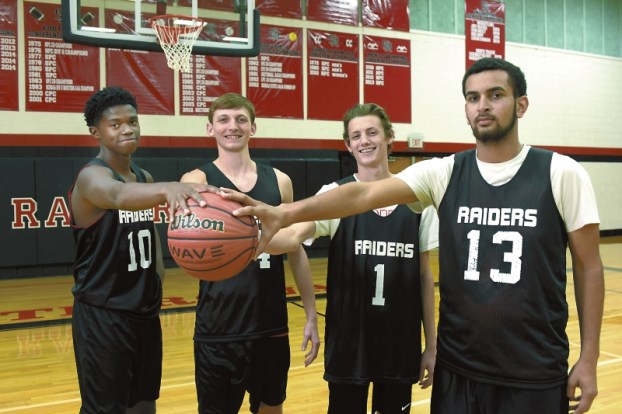 Patience will be the key word for the South Rowan boys basketball program.
Again.
The Raiders are fortunate that coach Andre McCain is a bottomless reservoir of patience and persistence.
“All I’m asking from our guys is that they meet me halfway,” McCain said. “I’m going to give them all I’ve got.”
The Raiders actually are less experienced and less speedy than they were a year ago when they not only didn’t win, they didn’t come close very often. Only four losses were by single digits.
On the other hand, there were games against West Rowan and East Rowan that South could’ve won with one more good bounce, and McCain hopes his team can finish better in late-game situations this time.
The tallest barrier for South to hurdle will again be its membership in the South Piedmont Conference. It’s always relevant to remind everyone that South is now a 2A-sized school, while a number of its league opponents are 4A-sized or at least bordering on 4A.
SPC school Robinson won the 3A state championship last season, and Cox Mill looms as a threat to go all the way this time.
“Our league will be tough again,” McCain said. “All I can ask is that we play hard and that we compete every night. If we do that, there will be games where we are in a position to win.”
South will head to the 2A Central Carolina Conference next fall. The hope is that South can generate a few victories this year to get a taste of winning and lay the foundation for more success in 2017-18.
Ahmad Hester, a quick guard who looked like one of the building blocks for the Raiders last season, transferred to Northwest Cabarrus over the summer.
That leaves McCain with only one player, 6-foot-4 junior Tyrese Shaver, who enjoyed modest varsity success last season. Shaver had some good games including a 16-point outing. Wesley Clodfelter and Tyler Peacock, both 6-3 seniors, were on the team last season, although neither made much of a statistical impact. McCain hopes Clodfelter, who has a sturdy frame, can rebound, and he hopes Peacock can knock down some shots.
McCain likes his new faces and is certain the Raiders are ahead of where they were last season at this point.
He may be right about that. South lost at Northwest Cabarrus, 51-44, in its first SPC road game and had a legitimate chance in the fourth quarter.
South is taller than last season, with Shaver joined by 6-6 Zach Powers, a transfer from West Rowan, and 6-5 Garrett Harrington, a baseball hurler who moved up from the jayvees.
South potentially has capable shooters in Bailey Graham, a Carson transfer, and Connor Childers, who is up from the jayvees. Connor’s brother, Colson, was a senior last season and one of South’s better players.
A key element for the Raiders is going to be Dillon Kluttz. The junior is making a huge transition from jayvee to starting varsity point guard.
McCain had figured on Kluttz learning behind Hester, but now there’s no choice but to throw Kluttz into the fire. In the SPC, just about everyone presses and a most pressure with long, tall athletes. Kluttz, Graham, Childers and backup point Cameron Corriher, a soccer star making a basketball comeback as a senior, will have to handle that pressure for the Raiders to have a chance.
Guard Kory Sellers brings quickness and defense, while Caleb Bapp, who moved from Vermont, will bring muscle to his role as a post reserve. Andrew Hubbard is known mostly for golf, but the senior guard was a pleasant surprise in tryouts and earned a spot on the team.
While South has several seniors on the roster, the top five scorers probably will be juniors. That’s a reason for optimism as the Raiders move forward.
“It’s a good group of guys,” McCain said. “We’ll see where we can go.”

Players to watch:
Tyrese Shaver, 6-4 Jr. — He’s got the athletic tools to be good and may have the highest ceiling on the team.
“He’s matured,” McCain said. “He can be a double-double guy, and we really need him to be that kind of guy.”

Bailey Graham, 6-1 Jr. — Graham looks like South’s most skilled player. He has a good first step, dunks easily and can bury 3-pointers. He could average double figures. He scored 19 on opening night against North Rowan.
“It’s going to come down to good shot selection,” McCain said. “If he takes the right shots, he can be a consistent scorer.”

Zach Powers, 6-6 Jr. — He got some playing time on the West Rowan varsity last season and had his moments. He could produce solid numbers in a starting role for the Raiders.
“He’s a big addition,” McCain said. “He has some skills, and you can’t teach a guy to be 6-foot-6.”

Dillon Kluttz, 5-11 Jr. — He’s the point guard, so he’s in the most critical role in a high-pressure, uptempo league.

Connor Childers, 5-10 Jr. — The lefty looks like a sure two-year starter. He’s not as tall as his brother, but he plays with energy and confidence.