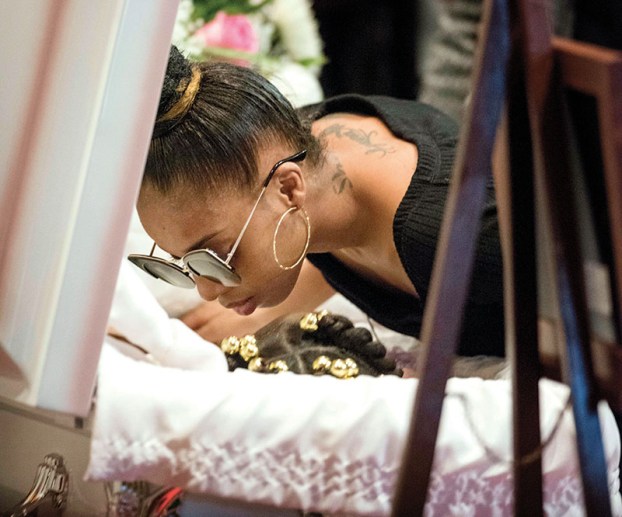 JON C. LAKEY / SALISBURY POST Shequita Woodberry leans into the casket that holds the body of her 7-year-old daughter, A'yanna Allen, for a few last moments together before the funeral service begins on Sunday, December 11, 2016, in Salisbury, N.C.

SALISBURY — A’yanna Allen was known for giving away hugs to practically anyone who came across her path. The funeral for the 7-year-old was filled with poignant stories and memories of the little girl whose life was cut short a week ago by gunfire at her Salisbury home.

There were hugs — for the family, for the teachers, classmates, city officials, law enforcement and strangers who had never even met the sassy, talkative little girl whose short life has gripped the community.

Curtis Blackwell, a family member, charged the mourners in the church to do as A’yanna had always started her day — “give everybody on your left or right a hug,” he said.

Blackwell couldn’t exactly express into words, he said, the pain the family has felt, but he encouraged them to keep going.

Slowly the sanctuary filled as those who knew the girl and strangers alike stood in a procession to offer condolences to the family during the hour-long visitation. Young girls wearing white T-shirts with A’yanna’s picture on the front and purple ribbons in their hair paused to take a long look at their dance partner lying in the white casket.

The girls were members of the Breath of Life Ministry, a praise dance team that A’yanna was a member of from Gethsemane Missionary Baptist Church.

A’yanna was a member of the West Side Afterschool Tutoring program, which operated out of the church she attended and where her funeral was held, Gethsemane Missionary Baptist Church. The program was established 10 years ago after another young girl, Treasure Feamster, 13, who was shot and killed as a result of gang violence.

“A’yanna was a benefactor of that program,” said Donnie Jefferson.

“Ten years later, we still have work to do in Salisbury,” Jefferson said.

She said A’yanna always came into the door with a smile and a hug.

Jefferson recalled the last time she saw A’yanna — Dec. 2, two days before the girl was shot while she slept in her bedroom that she shared with her paternal grandmother, Shirley Robinson at their Harrel Street home. Robinson was shot in the leg and still walks with the aid of crutches.

“She put her arm around me and said ‘I’ll see you tomorrow, Mrs. Donnie,’ but for her tomorrow did not come,” Jefferson said.

She read a letter from a Koontz Elementary School classmate, who said A’yanna would make up games for the other children to play.

“She would do something funny to make you laugh and giggle,” the student’s letter said.

“A’yanna is going to heaven. She was smart, loyal and would make you feel good,” the student wrote.

The young girl couldn’t wait to tell her afterschool teacher about “what happened on the bus,” or “what happened at school,” Jefferson said, reading a letter from a teacher.

“Let’s remember her beautiful smile and awesome laugh and give someone a hug,” the letter read.

“There wasn’t one person, staff-wise, who didn’t know her,” she said.

“The joy of the Lord is my strength,” she quoted the bible verse.

“She just had a joy about her,” Bolder said of A’yanna, “we can’t let her death be in vain. Take her death as a lesson.”

“We do not know the date or time when we are taken from this earth,” the Rev. Dr. Clary Phelps said during his eulogy.

“Today, not tomorrow, is a gift and a blessing. Tomorrow is not a promise,” Phelps declared.

“Every person has already borne some fruit. I’m glad and overcome with joy that A’yanna has borne some good fruit,” he said.

“If black lives matter they got to matter to black folk,” Phelps proclaimed to a cluster of amens.

“God has called us to talk about peace, but I’m angry and I’m upset. We should not die this way,” he said.

Solos and and songs through praise dances offered lyrics of encouragement throughout the funeral, which Phelps solemnly said was a celebration of A’yanna Allen’s life.

As the funeral drew to a close, there were fresh tears on some of the faces in the church.

And with an ease as if the young girl was merely sleeping, her mother leaned into the casket and placed a final kiss on her.

Over 500 girls participate in Girls on the Run 5K