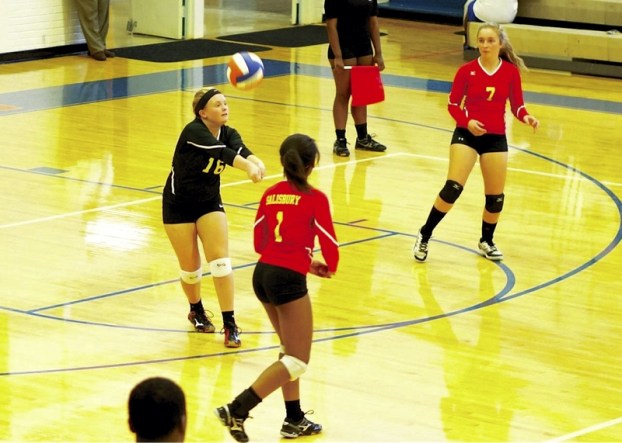 SALISBURY — Salisbury libero Abby Lee is headed to Meredith College to play volleyball, even though she took plenty of naps and wore out dozens of coloring brooks while riding in golf carts growing up.
Big sister Allison, part of Salisbury High’s Class of 2009, was a Rowan County champion, played on state title teams and played collegiately at Winthrop.
Big brother Alex, class of 2012 at Salisbury, played on state title teams for the Hornets in golf and soccer and competed for Catawba’s golf team.
Abby’s father, Brian, is the pro at Warrior Golf Club in China Grove, so it seemed logical that Abby would follow right down the same fairway.
But that didn’t happen. She’s been marching to a different drumbeat for a long time.
“Abby has the best natural swing of all my kids,” Brian said. “And she enjoys playing golf with me. She can hit the ball a long way, but golf is not something she wanted to do competitively.”
Part of that decision stemmed from not wanting to be compared to her older siblings every time she swung a 7-iron. Part of it is was just wanting to be her own person and finding her own path.
And there’s another reason. Her choice of sports tells a lot about who Abby is and what makes her tick.
“Golf is an individual sport, and I’ve always enjoyed the team aspect of volleyball more,” Abby said. “Whether you just had a good point or a bad point, it’s all about coming together and accomplishing something as a team.”
Abby didn’t start her athletic career dreaming about digs. When she was in middle school, soccer was her favorite sport.
But then there was a day that the Salisbury Academy Jaguars needed one more volleyball player to have the necessary six for a match. Her friends asked Abby to play. She said OK.
“Ever since, it’s just been volleyball for her,” Brian said. “People told her she was too short for volleyball, but that just made her want to prove them wrong.”
Abby is quite short. Most successful volleyball players are quite tall.
“But I learned a lot about playing the libero position from the coaches at the High Rock Volleyball Club,” Abby said. “Libero is what I focused in on.”
That’s strictly a defensive position, a position where lack of stature is a bit of an advantage because you’re closer to the floor. Her job is to return serves and to sacrifice her body to dig potential kills and to get the ball to the setter. She’s also part of Salisbury’s serving rotation — another skill where height isn’t essential — and she’s good at it.
Abby made the SHS varsity team as a freshman in the summer of 2013. It was the third game that season, still August, and the Hornets were on the road at West Stanly. Mallory Hodge, who was Abby’s coach her first three high school seasons, remembers it all with a smile.
“We’re trying to close out a tough match, and West Stanly’s student section is going crazy,” Hodge said. “Abby is serving, and I’m thinking, ‘Oh, my gosh, I’ve got a freshman serving.’ But she nailed the serve and we won the match. She was a freshman, but so confident. I knew then she was going to be a good one.”
As a sophomore, Abby was part of an unusually strong Salisbury team. The Hornets, led by Abby’s classmate Juliana Anderson, the league’s player of the year, went 9-1 in the Central Carolina Conference and won the championship.
The Hornets took a step back Abby’s junior year, but she didn’t. She was named to the All-Central Carolina Conference team.
“She always had a positive attitude and a great work ethic,” Hodge said. “Those are things can take you to the next level.”
Abby has taken advantage of being on the same team as the 5-foot-11 Anderson, who has some bounce and a perfect arm swing. Practicing against Anderson has helped prepare Abby to face college hitters.
“Abby always wants to practice against Juliana so she can get better,” said Andrea Davis, who coached the Hornets in Abby’s senior season. “It’s helped her practicing against one of the best hitters in the state.”
The Hornets were 11-11 this season. Lee was named All-CCC for the second time and made the All-Rowan County squad for the first time.
“I’ve known Abby for eight years,” Anderson said. “Fantastic person. The hardest worker I’ve ever met.”
That work ethic carries over to the classroom where Abby is an excellent student. Her favorite subject is history. Her career goal is kindergarten teacher.
One of her current classes is an internship with Salisbury Academy, where she’s learning about teaching from the same educators who taught her as a child.
She believes she’s found the perfect fit for her college education in Meredith, a Raleigh school with about 2,000 undergraduates.
“I wanted a small school with a great education program,” Abby said. “It’s a bonus that it’s in Raleigh. I’m a big (N.C. State) Wolfpack fan.”
Meredith, known as the Avenging Angels, has a fine volleyball program (25-4 this season) and competes in the USA South Conference with schools such as Averett, Greensboro, Methodist and N.C. Wesleyan.
Abby should fit right in with a new set of teammates because if you can’t get along with Abby you probably don’t like Santa Claus and the Eastern Bunny.
“Of all the kids I’ve coached, she’s by far the most determined,” Davis said. “She’s got that sweet disposition and that kind attitude, but she’s also tough. She’s a leader. I’m excited that she’s getting this opportunity.”