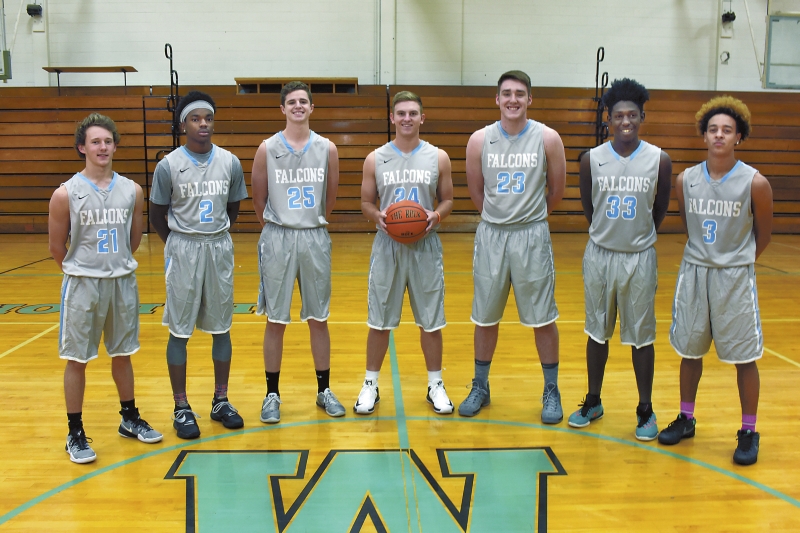 MOUNT ULLA —West Rowan’s boys basketball team got kicked around the SPC last season. This year it kicks back.

“We’re tired of being everyone’s collection plate,” he said following a recent practice. “It’s like West Rowan comes in and we get passed around the stands and everyone puts a dollar in. We’re not necessarily in a giving mood right now.”

That’s understandable. The larger Cabarrus County schools imposed their collective will on the Falcons, winning 10 of 12 against West — and Gurley’s had enough of it. He’s confident West will contend, rather than punt, in the league’s final year before realignment.

“It’s like that movie Animal House,” Gurley said. “In Kevin Bacon’s fraternity they were all getting paddled and saying, ‘Thank you sir, may I have another?’ We don’t want to be in that fraternity any more. Our mindset is we’re going to start delivering some of that.”

Gurley is already in mid-season form, but his team is just rounding into shape. In the right-here, right-now world the Falcons are eight do-whatever-it-takes gym rats and a handful of late-arriving footballers who joined the squad this week. Two starters return, but expect West to frantically run 12 pairs of legs in and out of games.

“We’re going to do everything we can to up-tempo this thing,” Gurley said. “To get it back to an athletic, competitive environment. We’ve got guys who play hard — that’s what West Rowan has walking around the halls.”

They’ll do that with rugged mainstays Austin Love and Caleb Mauldin. Love is the reliable-as-a-Die Hard power forward who provides persistence and polish. He spent his first varsity season rebounding with authority and averaging 8.7 points-per-game. “He’s just a winner,” Gurley said. “A high-character guy. Scoreboards don’t determine that.”

Worth measuring is the contribution Mauldin provides. A stabilizing force in the frontcourt, the 6-8 junior has beefed up to 230 pounds. He averaged 22.9 points-per-outing last winter and begins the season with 852 career points.

“Caleb can put the ball in the hole,” Gurley offered. “It’s that simple.”

Then there’s junior Tyrese Lawson, a 6-3 small forward. “He could be the best defender we have,” Gurley said. “He attempts to do what we ask more than anybody other than Austin Love.”

Junior Cole Myers is a 6-6 forward whose game is still evolving while senior Elijah Lawson completes WR’s skyline. A 6-3 forward, he’s never played basketball but seems to be a strong defender and shot-blocker. “I found him walking in the halls,” Gurley said, “and told him to show up at practice. You’ve got to look around to find out what you’ve got in your school. I’ve never been very good at that, but this year I tried harder.”

More unsettled is West’s backcourt dilemma. Gridders Paris Hillie, Kortez Weeks and Martavio Rankin will become regulars in the rotation, but until then Gurley has looked at New Jersey transfer Darius Kure, returning letterman Jayson Delgado and undersized Logan Sproul. Kure — a 5-10, junior point guard — may be a pearl in the mud.

“He’s got this eagerness to learn,” the coach said. “He’s got a lot of things to get better at, but that may be the theme for the whole team.”

Improvement is imminent in Mount Ulla, so the corporal punishment should end this winter. A daring thought is to pencil West into fifth place in the traditionally black-and-blue SPC, behind Cabarrus powers Cox Mill, Robinson, Concord and Hickory Ridge. Of course nothing is ever certain when Gurley is working his magic.

“If you can finish fifth in this conference, you’re going to be a really good team,” he said. “Anybody who faces us in the playoffs — or whoever finishes fifth or sixth — they better not take us lightly.”

Austin Love, senior forward — The team’s Mr. Fix-It with legs as willing as his heart. Heads to Chapel Hill on a baseball scholarship in the fall. Good thing he hasn’t lost his fastball.

Caleb Mauldin, junior forward — It’s no act. He really is that good. And quickly getting better.