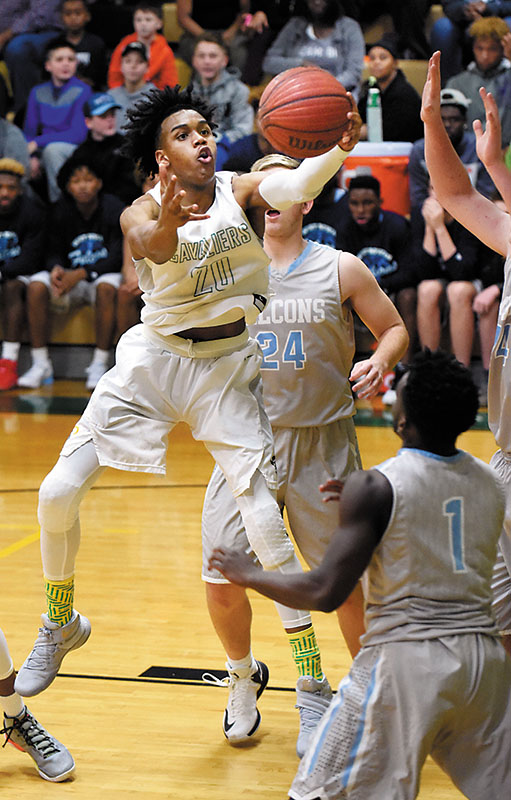 SPENCER — Seniors Henderson Lentz and Joe Scott combined for 20 points in the fourth quarter to lead North Rowan to a foul-plagued, 69-67 victory over West Rowan on Wednesday in the North gym.
“Both teams are very aggressive, and there were a lot whistles,” North coach Andrew Mitchell said. “Six of the top guys in the game were sitting with fouls before halftime. That’s not good for the teams or the fans. I don’t know how to fix that, but I wish it could be worked out.”
North had to overcome some dismal foul shooting, but it made the ones it had to make at the end.
“We work so hard to get to the foul line that it’s a shame not to make those free throws,” Mitchell said. “That’s been the biggest thing holding us back so far.”
North’s foul-shooting troubles helped West make a comeback. But West’s own foul woes, especially losing Kortez Weeks and 6-foot-7 Caleb Mauldin to personals, ultimately decided the game in North’s favor.
Attacking guards Darius Kure (19 points) and Paris Hillie (17) were the key guys for the Falcons (1-2), but they weren’t enough to offset a career-high of 25 by Lentz, who had 13 in the final quarter, and a monumental performance in the closing minutes by the relentless Scott.
“When Mauldin fouled out, I could see Joe’s eyes get big,” Lentz said. “He knew he’d be able to score in the paint.”
West’s defense — mostly Martavio Rankin — kept Lentz silent the first five minutes, but he stroked two long 3-pointers late in the first quarter to propel the Cavaliers (4-1) to a 17-14 lead.
North pushed that lead to eight points in the middle of the second quarter, but West dominated the late portions of the first half behind the play of Kure to pull within 28-26. That West surge carried over into the second half.
A spree of buckets by the electrifying Hillie carried the Falcons to a 47-41 lead after three quarters.
A 3-pointer by Lentz with 6:10 left to play got the Cavaliers within one point, and Scott fearlessly took a charge to get the ball back.
“West’s guards are quick, and if you don’t take the charge they’re either going to get a bucket or an assist,” Scott said.
Lentz’s three-point play with 4:26 remaining tied the game at 51-all.
Lentz played remarkably well last season after returning from a near tragedy when his heart stopped beating at a Catawba team camp, but he was playing at a fraction of the conditioning and confidence that he has now. He’s a deadly 3-point shooter, but he’s also tall enough and athletic enough to finish plays at the rim.
“The biggest thing for me in the fourth quarter was Korty Weeks fouling out for West,” Lentz said. “Korty was locking me up pretty good. When he fouled out, the floor opened up a lot more.”
The battle was furious in the closing minutes. With the score tied 57-all with 2:05 remaining, Scott soared high to block a pointblank shot by West’s Austin Love. That was a turning point.
“Joe can be ice-cold for three quarters, but we know at crunch-time he’s always going to be there,” Mitchell said. “He made so many big plays on both ends of the court and then he made some big free throws.”
West, which won against Carson on Tuesday, went cold on jumpers in the final two minutes, and Lentz or Scott made them pay each time with buckets or free throws. North suddenly went up by eight points with 23 seconds left.
“That was a game of runs,” West coach Mike Gurley said. “North had the last one and the biggest one.”
While North was ahead by eight late in the game and got a clinching free throw from Scott with 4.1 seconds left, West still made the final score close with an odd three-point play — a Kure free throw followed by a Tyrese Lawrence stickback of a missed second free throw. And then Kure was fouled on a 3-point attempt with a fraction of a second left to play.
“We wanted to come to Spencer and get a ‘W’,” Gurley said. “That didn’t happen, but we played very hard and we battled hard to the last second, and this will help us get ready for the South Piedmont Conference.”
While Lentz and Scott did the scoring, a lot of others chipped in with rebounds and defense. West didn’t get many easy buckets or many second-chance points.
“I was impressed with West,” Lentz said. “They’re really good. Obviously that game could’ve done either way. But at the end, the ball bounced our way.”
North has won its last four meetings with the Falcons.
“These are good games for both programs and for the county,” Mitchell said. “We were up against one of the best coaches in North Carolina, so this was just a great team win for us.”
A packed house watched it. West and North will tee it up in a rematch next Wednesday in Mount Ulla.