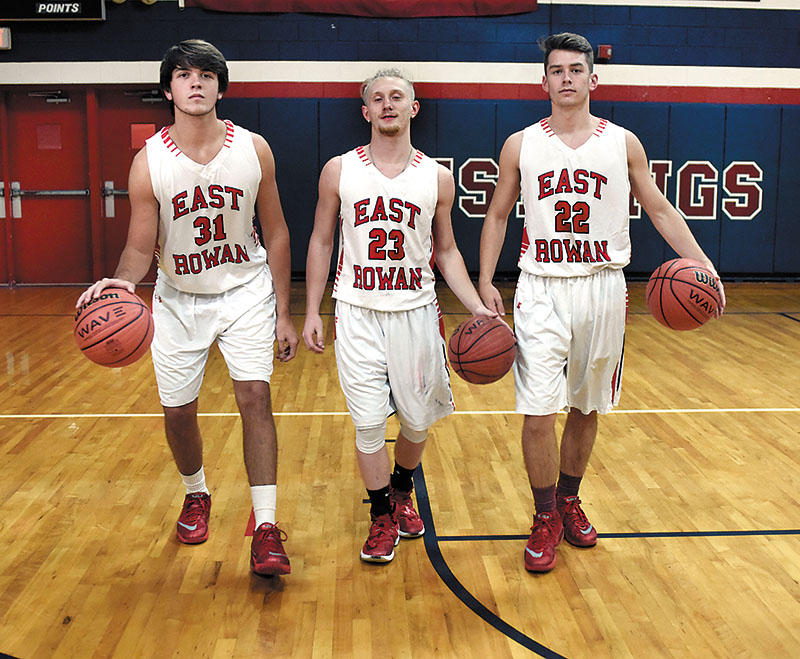 Mustangs at a Glance:

GRANITE QUARRY – Very few times, if any, in the history of East Rowan basketball, have the Mustangs opened a season with a true post presence. But that seems to be changing for the 2016-17 campaign.

Second-year head coach Kurt Misenheimer has his usual compliment of guards and wing players but suddenly there are a couple of young wide bodies down low to add a whole new element to the Mustang arsenal. “This is the biggest team we have had come through here in a long time,” he says.

Freshman Brandon Jefferson checks in at 6-4, 250 pounds, while sophomore Elton Hooper is a 6-6 sophomore with a seven-foot wing span and great leaping ability. “He is very long and he changes the game a lot for us,” Misenheimer said of Hooper. “He is the type of player we really have not had before at East. And Jefferson is a true inside-out player who uses his big body well down low.”

In the ultra-competitive South Piedmont Conference with a talented slew of big guys, East may not be ready to dominate just yet, but Misenheimer feels they can hang in there with the best. “We have a lot of versatility,” he said. “I think we can compete with any team out there, I really do. This is one of the toughest conferences in the state,”

The Mustangs opened the new season with an iron-man group of seven players, the two young post players and five perimeter guys who have played together at some level for the past three years: senior point guard Lucas Morton (5-10), junior guard Bryson Sprinkle (5-10); senior forward Paiton File (6-5), senior guard Ellis Taylor (6-0) and junior wing Trevor Scruggs (6-3). “We don’t have a lot of bodies but we have a unique blend of skills.” Misenheimer said.

When football season ended at East, the Mustangs added three more players to the varsity and will stay at a 10-man roster for the season. All three are talented and athletic sophomores: Gabe Hinceman (6-2), David Broaddus (5-9) and forward Christian Bennett (6-0).  All are expected to contribute as Misenheimer expects to use 9 to 10 guys each game out.

“We have a lot of guys that can shoot the ball and we have guys who can score inside.” Misenheimer said. “We have good ball handlers and our rebounding should be really good this year.”

So far this new season, the Mustangs have started out 0-4, including 0-3 in the SPC, but have been competitive in three of the four games.

“This team, I feel, is playing more together as a team than in the past,” stated the speedy point guard Morton, “We definitely have a couple of big guys to feed the ball to this year and we plan a lot of fast paced movement on offense.”

Misenheimer will be assisted again this season by coaches John Cherry and Darren Cozart.

Lucas Morton: 5-10 Sr. PG – He is the team’s primary ball handler who moves at break-neck speed, can shoot the three as well as slash to the basket. He averaged 6.0 points last season as a part-time starter.

Brandon Jefferson: 6-4 Fr. F-C – At 250 pounds, he takes up a lot of space down low and already has a pair of 10-rebound games for East this season. His coach says he can also handle the ball well and will look to create come mismatches away from the basket.

Elton Hooper: 6-6 Soph. F-C – His coach says the rangy Hooper can alter shots, can block shots, can finish in the paint and he can really jump, plus he has that 7-foot reach. “He wants to get it out and run the floor so I to always remind him he is not a guard … yet.” Misenheimer said. He is a transfer from North Rowan and joined the team this summer for team camp.