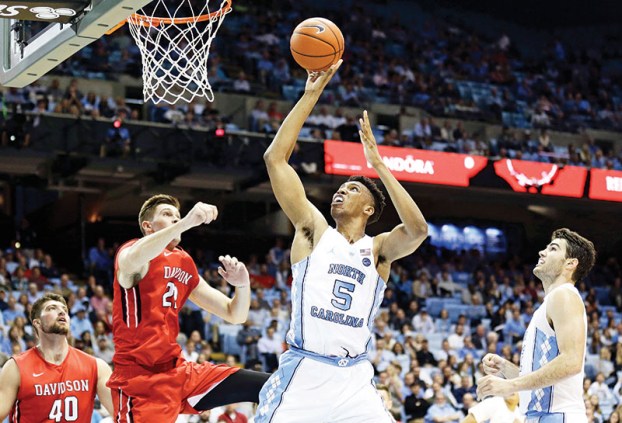 No. 7 Tar Heels hold off Davidson

Luke Maye added an early burst by scoring all of his career-high 10 points before halftime for the Tar Heels (9-1), who played without top point guard and No. 2 scorer Joel Berry II. UNC didn’t get in any kind of groove, with the 6-foot-8 Jackson largely carrying the offense.

Jack Gibbs — ranked seventh nationally by averaging 23.3 points — finished with 30 points for the Wildcats (5-3), who trailed by 16 midway through the second half before making a late push to get within three in the final 2 minutes.

But Kennedy Meeks answered with two free throws, then Isaiah Hicks followed with two more after getting a big rebound in traffic with 52 seconds left to help UNC hang on.

Davidson: Gibbs is the kind of scorer that can scare any opponent when he gets hot, while Peyton Aldridge (22 points) provides his own matchup troubles. And with a veteran coach like Bob McKillop, this is the kind of team that scares big-name teams come tournament time.

UNC: The Tar Heels got a glimpse of life without arguably their top player in Berry. Nate Britt got the start, while Seventh Woods and Stilman White saw plenty of minutes at the point. But the Tar Heels missed Berry’s finish-through-contact toughness, leadership and scoring ability.

Davidson: The Wildcats get a 10-day break before playing their fifth power-conference opponent this year, facing No. 3 Kansas on Dec. 17 in Kansas City, Missouri.

UNC: The Tar Heels begin a two-game set with Southeastern Conference opponents, first by hosting Tennessee on Sunday before facing No. 6 Kentucky on Dec. 17 in Las Vegas.