Reach Out and Read program promotes literacy for children 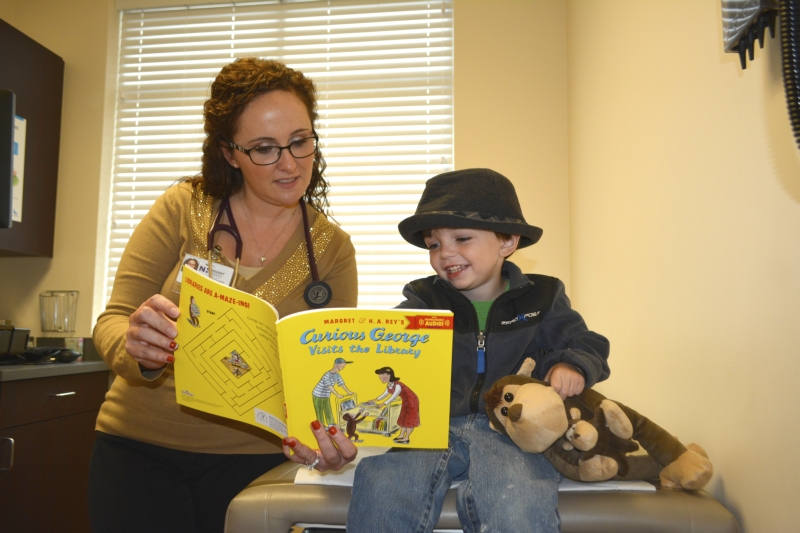 Nurse practitioner Reagan Swaringen and a young patient enjoy looking at a Curious George book recently at Granite Quarry Internal Medicine & Pediatrics. The practice participates in Reach Out and Read, a program that distributes books during well-child visits. The program was initiated by Smart Start, a United Way agency. Susan Shinn/Smart Start

In 2011, Smart Start Rowan inaugurated Reach Out and Read, a national evidence-based program that partners with pediatricians to give books to children during well visits.

The books, Edwards notes, are the most expensive part of the program. Her role is to visit local pediatric offices and encourage them to incorporate Reach Out and Read into well-child visits.

“It’s so easy!” Edwards says of the program.

At every well visit, physicians talk with parents, grandparents, and other caregivers about the importance of reading to children from the very beginning of their lives. So Reach Out and Read is a “prescription to read.”

“It helps with developmental screenings,” Edwards says. “Encouraging reading has a big impact coming from a physician.”

“When you get to kindergarten, you’re going to be behind if you don’t start with a basic foundation of reading,” says Dr. Jennifer Hudson, a longtime pediatrician with Salisbury Pediatrics.

Edwards says that Salisbury Pediatrics sees so many children — serving some 80 percent of children in Rowan County — that Smart Start Rowan couldn’t pay for all the books needed there. At that practice, a portion of the funding comes from Smart Start Rowan and the majority of the funding comes from Rowan County United Way. Salisbury Pediatrics has also contributed funding, says Alicia Shue, clinical manager.

Reach Out and Read starts at 6 months, but Edwards is keen to push that date even earlier, to distribute books at birth. Of course, more books means more money, and Edwards is always seeking out further granting sources.

“But other grants don’t come close in giving the amount of money that United Way does,” she says.

Reach Out and Read is a big hit at local pediatrics practices.

“Our providers almost see it as a competition to see who can give out the most books,” says Joel Linn, practice manager at Granite Quarry. “Our providers and patients have embraced it.”

Dr. David Caron, who practices internal medicine and pediatrics, learned about Reach Out and Read when he was in training in Philadelphia.

“It was missing when I moved down to North Carolina,” he says. “It was really a big shock not to have it. When Smart Start Rowan came by, I said yippee! In my practice, I’ve got several generations of family members. The older siblings get involved with a child in reading. It was difficult to talk about reading without any material to prompt the conversation. Now I get to walk in with a book for the child. I get to talk with big brother and big sister, and tell them it’s also their responsibility to teach this child to read. It works out really well.”

Caron’s two children, 10 and 16, got books from the doctor’s office, he says. “They read more than any people I know.”

For the record, Caron says that “Curious George” is his favorite children’s book.

“Our families love Reach Out and Read,” says Megan Quigg, a physician assistant with the practice. “It’s a good ice breaker for patients, and it brings in social aspects of parenting.”

Her own daughter, 1, recently got a book from the doctor called, “What Games Can I Play?”

“All of our feedback from families has been positive, from those with the youngest babies to the 5-year-olds,” says Reagan Swaringen, nurse practitioner.

A child has well visits every three months until age 2, and then each year after that until age 5, when the child ages out of the program, Caron says. “So they’re getting a lot of books — almost a dozen books for every child. It’s like a little library.”

Salisbury Pediatrics served as a pilot program for Reach Out and Read in 2011.

“We used to just do state funding for Reach Out and Read with our Medicaid or self-pay patients,” Shue says. “But I expressed an interest to Lisa to open it to all children. United Way has been a huge help with that.”

She adds, “With Reach Out and Read, we have found moms and dads and grandparents who can’t read. That’s been an open door for us to get help for them. We have bilingual books, so that children who speak English can learn more about Spanish, and vice-versa.”

The practice has two storage areas with a large inventory of books, categorized by age group.

“We keep a good supply,” Shue says, “and we keep a list of the books each child receives.”

“So many families do not have books at home,” Hudson says. “That’s not a luxury some kids have. To take a book home is like getting a Christmas present. It sends a message from birth to kindergarten of the importance of reading with children — and we reiterate that every time we hand out those books.”

Not only does Reach Out and Read involve local physicians, Smart Start Rowan, and the United Way, it also works with other literacy focused groups in the community, such as Rowan Reads to Newborns and Ready Set Read… Rowan.

“It’s all about community partnerships and relationships to help with this effort,” Edwards explains. It’s a coordinated effort.”

Chicken and dumplings: In case you don’t want to…