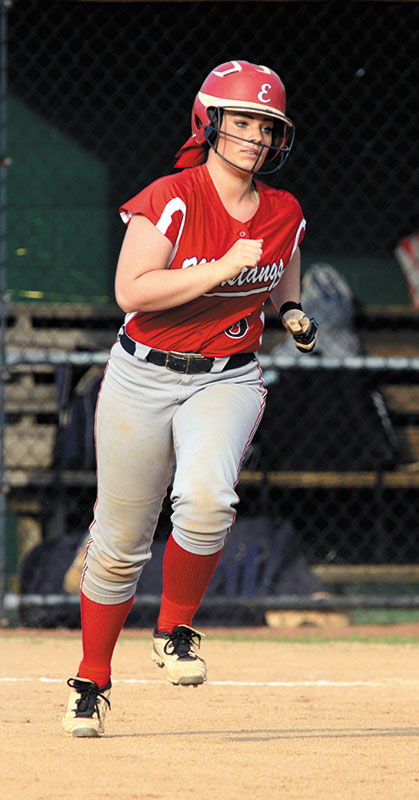 File photo by Wayne Hinshaw, for the Salisbury Post East Rowan’s Coryn Soul rounds the bases after hitting a home run against Hickory Ridge on May 7, 2015.

GRANITE QUARRY — East Rowan senior Coryn Soul can hit.
There was a game last spring against South Rowan in which Soul belted a homer — and a triple — and two doubles.
East coach Mike Waddell remembers the homer that she pulled to left to pull out a key game against Cox Mill as well as her opposite-field triple over the right fielder’s head in a tight game against Hickory Ridge.
“She can hit it hard to all fields,” Waddell said.
Soul’s powerful bat helped a young East team finish with a 15-9 overall record and a 12-6 mark in the South Piedmont Conference.
Now Catawba’s softball program is giving Soul a chance to continue to do that sort of hitting for the Indians.
“I’ve been to softball camps at a lot of different schools,” Soul said. “Catawba was the first one that felt right. I felt like I fit in there. The coaching staff gives you a lot of support.”
After a dynamic season in which Catawba put up a 39-16 record, a lot of girls want to play for the Indians. Catawba is attracting a host of players and there will be serious competition for positions and playing time.
Soul’s defensive position in college isn’t certain, but if she hits the Indians will find a place for her. She’s basically an infielder, but she hasn’t ruled out a move to the outfield in college.
“She’s very versatile,” Waddell said. “She’ll probably be our shortstop as a senior, but she can play multiple positions.”
Soul got started with softball early, playing rec ball as a 6-year-old. Serious travel ball started by the time she was a teenager.
“I’ve played for a lot of travel teams, about seven different ones,” Soul said.
She played for some strong ones, including the Lady Blues, Lady Canes and Extreme Performance.
She’s taken batting lessons for years from Adrian Gantt, the manager and director of softball operations at Salisbury-based Extreme Performance. Gantt assists her mother, Nan Whitley, with the Catawba softball team, so she’s very familiar with Soul’s swing and her potential.
Soul hasn’t lived in Rowan County all her life. She transferred to East Rowan from Cox Mill prior to her freshman season.
She got noticed during East’s run late in the 2015 season when she was a sophomore. East reached the conference tournament championship game. Soul rocketed an opposite-field homer to give the Mustangs the early lead against Hickory Ridge, but the Mustangs couldn’t hold on.
“That was a nice hit,” Soul said. “And that was a really exciting game.”
As a junior, Soul developed into an All-South Piedmont Conference and All-Rowan County player for the Mustangs.
“She swung the bat really well for us in the middle of the lineup, and she did a good job defensively at third base and shortstop,” Waddell said.
Waddell expects even bigger things from Soul as a senior.
Soul is a good student and plans to major in psychology at Catawba.