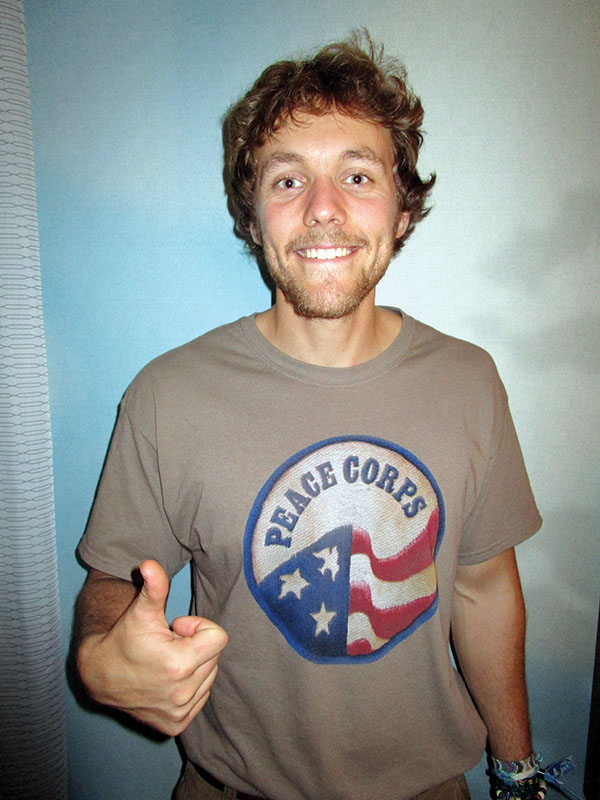 Ethan Horne in his first Peace Corps t-shirt that he received during training in Philadelphia.

An even bigger adventure: Ethan Horne is headed to Africa with the Peace Corps

Just last November, Ethan Horne completed what began as an impromptu bike ride. His brother, Dylan, and a friend had planned to ride their bikes to the Pacific coast. At the last minute, Ethan decided to join them on a yard sale bike. He had no plans to ride very far because he didn’t have any real equipment. Ethan had no tools, a tent or enough cool weather clothing.

But long after Dylan and his friend had given up the ride, Ethan kept riding. His route continued very close to the perimeter of the United States along the Pacific coast and near the southern border of the southwest, then on to Key West. Finally, in November, Ethan returned home and joked, “I had to get home. I didn’t have a winter coat.”

If that wasn’t enough, Ethan packed the same bike within a couple of weeks and rode by car to Colorado to help a friend’s move. Eventually, Ethan rode that same bike back to Minnesota. He said, “I had met a girl, but this time I had winter clothes. I got back to see her on Valentine’s Day. Then we went to meet her parents.”

Last Sunday, Nov. 27, Ethan began the next great journey of his life when he flew to Philadelphia to join the Peace Corps. Ethan began the year-long application process back last November, just about the same time he headed to Colorado. Ethan said, “I will get three days of orientation in Philadelphia. I am interested in meeting my peers, about 45 or 50 altogether. Then I will go to Africa and learn the customs and traditions on the way to being a public health educator specializing in neonatal methods.” With a degree in Health Promotions from Appalachian State University, Ethan was accepted as part of the team that would travel to Africa.

The Peace Corps is a volunteer program run by the U.S. government. The stated mission is providing technical assistance, helping people outside the U.S. understand American culture while allowing volunteers to understand the cultures of other countries. The work is generally related to economic and social development. Peace Corps workers are American citizens, typically with a college degree, who work abroad for a minimum of two years after three months of training. The Peace Corps was established by President Kennedy in 1961. Ethan added, “After the two years, there will be options for government employment.”

As a Peace Corps volunteer, all of Ethan’s expenses for travel and training will be covered in the U.S. and again once he flies to Africa. Ethan said, “No money changes hands. I will be staying with a host family and all medical and dental expenses are also covered. The Peace Corps provides the passport and vaccinations including those for yellow fever and malaria.”

During the two-year term of service, there will be some challenges. Mail can take a month and Ethan will only be allowed one phone call a week. WiFi will seldom be available but Skype visual conferencing can be used at the Peace Corps offices. Now 24, Ethan will make home visits and do clinical work and possibly vaccinations near Conakry, Guinea, part of West Africa.

Conakry is tropical, with bananas and pineapples. Highs are in the 90s, lows in the 60s. Ethan said, “There is a wet and dry season. I have done some research, but not too much. I don’t want to let my imagination run wild. Others have said good things about the area. It sounds like a pretty stable place, not involved in the political unrest that we often hear about Africa.”

Knowing Ethan’s spirit for adventure, his mom, Charlene, said, “I was not that surprised. He has always been the peacemaker of the family. I didn’t faint and I didn’t cry. It was an honor for Ethan to be chosen. I have been warned about the diseases and that they must use mosquito nets on their beds but I know they will take care of him.” The deadly Ebola virus was first discovered in this area of West Africa.

Complicating matters for Ethan is the reason that he made the wintertime bicycle ride back to the Minnesota in the first place. While taking a rest break on his perimeter of the U.S. bike ride, Ethan spotted an attractive girl paddling her kayak down the Straight River near Owatonna, Minn. They spent some time talking, before Ethan pedaled on. The kayaker, Kim Hyatt, later tracked him down and such was the beginning of a relationship that has flourished since. Hyatt was recently chosen as the newspaper reporter of the year for Minnesota and now works in nearby Fargo, N.D. She hopes to be able to visit Africa, although Peace Corps visitors must be approved. Ethan said, “During our time apart, we have both grown emotionally. She has inspired many of my travels.”

As the two-year stint begins, Ethan added, “It is hard to say goodbyes, but as I prepare to leave, there is such an excitement for the unknown. I have always envisioned some way to give back. The Peace Corps has been called the ‘hardest job you will ever love.’ There are certainly plenty of mixed emotions at this point but I look forward to having a more global perspective.”