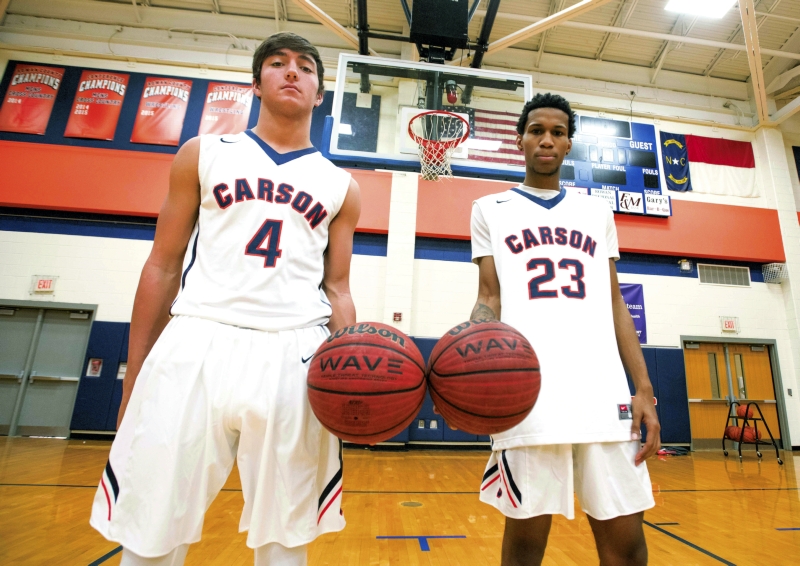 CONCORD — Carson lost senior standout Brenden Westbrook to an ankle injury, but the Cougars were able to hang on to an 86-83 South Piedmont Conference road win at Robinson on Friday.
Robinson lost some very good players from last season’s 3A state championship team, but with Virginia Commonwealth signee Lavar Batts and 6-foot-9 newcomer Jamari Roberts, the Bulldogs are still formidable.
“Just super-proud of the guys for handling a lot of adversity,” Carson coach Brian Perry said. “It’s a really big win for us, but any win in this league is a good one and any road wins you can get are great.”
Carson (3-0, 3-0 SPC) withstood 34 points from Batts.
Jamarius Hairston scored 25. Jailen Williams matched his career high with 20. Cameron Prugh had 15, and Owen White scored 14. All four are juniors.
“A lot of guys played well,” Perry said. “Williams had a really great game, driving, getting to the foul line and finishing plays.”
The teams played on even terms in the first quarter, but Carson shut out Batts in the second quarter and moved ahead, 36-27, at halftime.
“We shot well throughout the game,” Perry said. “And we came out of the second half with a lot of confidence. And then Cam Prugh got hot.”
Prugh made three 3-pointers in the third quarter. The Cougars had a 33-point period and took a 69-52 lead.
Robinson made a strong rally behind Batts in the fourth quarter, but Carson, 9-9 in the SPC last season, was able to hang on.
“They’re a great team, we knew they’d make a run at us, and they did come at us hard in the fourth quarter,” Perry said. “It got tight, but we were able to make enough plays to win the game.”

Prep Football: Previews for Round 3 of state playoffs