Panthers come up short against Raiders 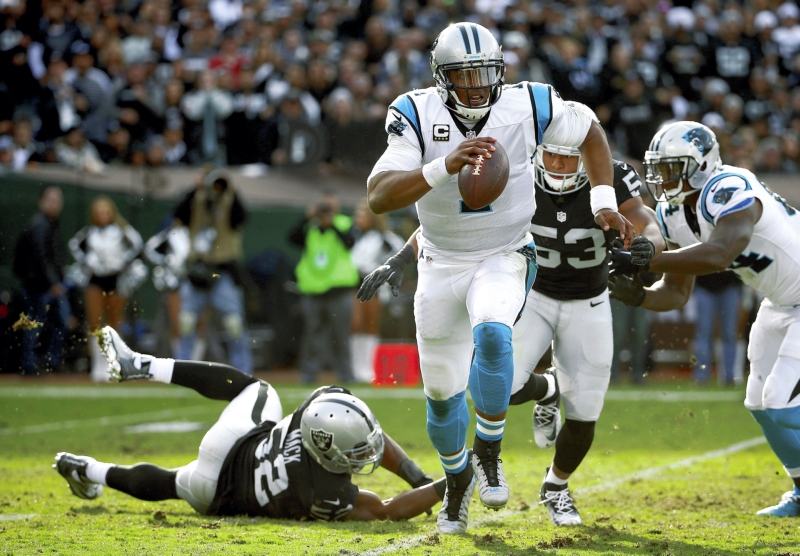 OAKLAND, Calif. (AP) — Cam Newton’s return to the Bay Area finished in similar fashion to his last trip here for the Super Bowl: a lost fumble on a strip sack that ended any hopes for a Carolina comeback.

While the stakes were far lower than in the Super Bowl defeat to Denver, the roller-coaster 35-32 loss to the Oakland Raiders on Sunday might have ended the Panthers hopes of making it back to the playoffs.

Carolina (4-7) scored 25 straight points to take an eight-point lead early in the fourth quarter before allowing Derek Carr and the Raiders (9-2) to rally to take the lead. Then a key dropped pass by Greg Olsen and Khalil Mack’s sack of Newton sealed the latest disappointing loss for a Panthers team that found ways to win games such as this last season on the way to a 15-1 regular season.

“We are done comparing everything to last year,” Olsen said. “The reality is that we are 4-7. It is a tough loss. Obviously, there are a lot of things that we could have done better to give us a better chance.

There was an interception by Newton late in the first half that Mack returned for a touchdown, a blocked extra point by Denico Autry in the third quarter, two missed 2-point conversion attempts, including a dropped pass by Olsen, and the decision to punt on fourth-and-1 late in the fourth quarter before Oakland drove for the go-ahead field goal by Sebastian Janikowski.

But despite all that, the Panthers were in position to drive for the tying or go-ahead score. After holding the Raiders to a field goal, Carolina took over at its 25 with 1:45 to play.

Newton completed two quick passes to get the ball to the Oakland 44 with 1:15 to play. Newton then threw two straight incompletions as the Raiders got pressure against a banged-up offensive line and the Panthers needed to call their final timeout before the third down play to get the right personnel in the game.

Newton then found Olsen deep over the middle, but Olsen was unable to come down with what would have been a tough catch. Olsen earlier dropped a pass on a 2-point conversion attempt that proved costly later.

“You have to catch the ball,” he said. “I have caught a lot of balls in this league and this team relies on me to make the plays and come to me when (the game) is on the line. You have got to make the play.”

Carolina still had one more shot, but Mack beat Trai Thomas on the fourth-down play to strip Newton and recover the fumble that sealed the win. Thomas, normally a guard, had to move to right tackle with Mike Remmers shifted over to the left side in place of injured Michael Oher.

The Panthers were also on their third center with starter Ryan Kalil missing the game with a shoulder injury and backup Gino Gradkowski leaving with an injured knee.

The Super Bowl also was decided on a strip sack when Von Miller brought down Newton and forced a fumble. That ended a charmed season in which Carolina went 8-1 in games decided by eight points or fewer. This season, they are 2-5 in those kinds of games and are in last place in the NFC South.

“We’re just got to find ways,” Newton said. “For most of this year we have to come together and win these close games. That’s what it comes down to.”