With playoffs at stake, Ohio State beats Michigan in 2OT 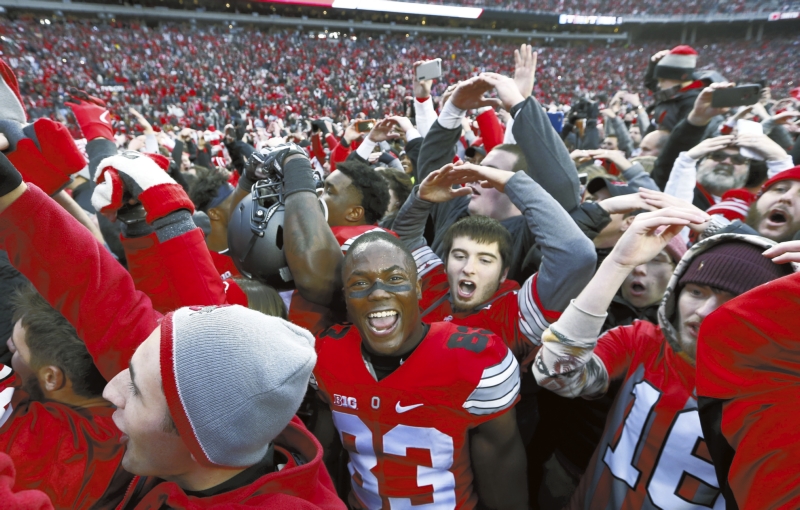 COLUMBUS, Ohio (AP) — The play was 29 Lead, and it will go down in history as how Ohio State beat Michigan in one of the greatest games ever played by the Big Ten’s most storied rivals.

That’s pretty much all Buckeyes coach Urban Meyer wanted to talk about. Everything else about the second-ranked Buckeyes’ 30-27 victory over the third-ranked Wolverines on Saturday was almost too overwhelming for Meyer to sort out so soon after what he called an instant classic.

Curtis Samuel swept in for a 15-yard touchdown on 29 Lead left after Ohio State barely converted a fourth-and-1 in the second overtime. The biggest crowd ever to watch a game in the Horseshoe then began spilling onto the field in a scarlet-covered celebration that included a stirring sing-a-long to “Sweet Caroline.”

“I remember that Neil Diamond song,” Meyer said about the crazy scene, but he couldn’t recall much else. “Weird life, man.”

It won’t be the Big Ten. No. 8 Penn State beat Michigan State 45-12 in State College, Pennsylvania, to clinch the East Division and a spot in the conference title game next week against No. 5 Wisconsin. Still, the Buckeyes added to a resume that already impressed the College Football Playoff selection committee.

Of course, beating “The team up North,” as Michigan is called around here, is enough reason to party — and can be hard to put into perspective.

“I didn’t do a lot of thinking, honestly,” Ohio State quarterback J.T. Barrett said after the Buckeyes beat Michigan for a fifth straight time. “I just looked around and, man, that just happened.”

The 113th meeting of Ohio State and Michigan became the first to go to overtime. It was filled with drama, thrills and controversy. Michigan went away feeling dejected and cheated.

Facing fourth-and-1 from the 16 in the second overtime and trailing by three, Meyer decided not to try a potential game-tying field goal with Tyler Durbin, who had already missed two short ones in regulation.

Barrett kept it on fourth down and slammed into the back of his blocker, A.J. Alexander, right at the line to gain. The first-down call stood on video review.

“That was not a first down,” said Michigan’s Jim Harbaugh. And then, as if channeling his former coach, Bo Schembechler, Harbaugh added: “I’m bitterly disappointed with the officiating today.”

On the next play, Samuel, who had made a swerving, change-of-direction run to set up the fourth-and-1, skipped through a lane and raced into the end zone for the win.

“Been a part of some crazy football games here,” Barrett said. “That one was No. 1.”

The loss likely eliminated Michigan from the playoff race. The Wolverines could end up in the Rose Bowl, but the biggest prizes are still eluding them in their second year under Harbaugh, who dropped to 0-2 against Meyer and the Buckeyes. Michigan has not won the Big Ten since 2004.

A crowd of 110,045 watched what might just be the second act of a new Ten Year War between Michigan and Ohio State, with Meyer and Harbaugh playing the roles of Woody Hayes and Schembechler . If that’s the case, there is much to look forward to for college football fans.

Michigan: Quarterback Wilton Speight returned after missing last week’s game with a left shoulder injury. In many ways, he was Michigan’s best offensive player, going 23 for 35 for 219 yards and two touchdown passes. He also made three critical turnovers, one interception Malik Hooker returned for a touchdown in the first half and another pick by Jerome Baker that set up Ohio State’s second touchdown to make it 17-14 with 1:06 left in the third quarter.

“It’s a bummer, you know, knowing I let the defense down,” Speight said.

Ohio State: Barrett will not go down as Ohio State’s greatest player, but no one will ever doubt his ability to come up big when the Buckeyes needed him most. He struggled throwing until the fourth quarter and finished 15 for 32 for 132 yards. He also ran for 125 desperately needed yards against a Michigan defense that took almost everything else away.

Michigan: A slight drop for the Wolverines, but still a critical one in the playoff rankings.

Ohio State: The Buckeyes looked locked in to No. 2.

Michigan: The Wolverines will likely go to a New Year’s Six bowl. The question is whether it’s Rose or Orange. Maybe Cotton?

Ohio State: Maybe a playoff game on New Year’s Eve? Maybe in the Rose Bowl if the Buckeyes get squeezed out of the playoff? Stay tuned.