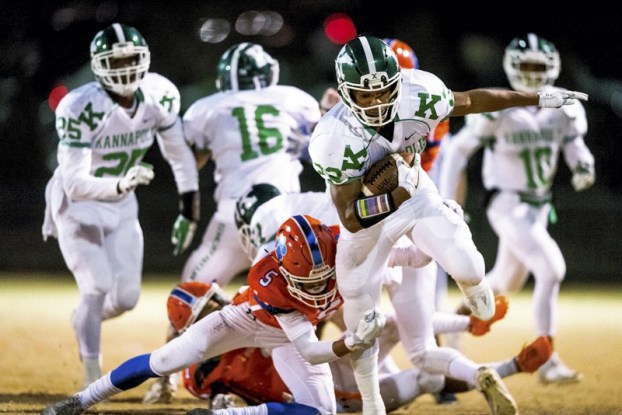 Wonders hold on to defeat Glenn KERNERSVILLE – It had been seven years since Glenn played host to an NCHSAA playoff game at Marty Stanley Stadium.

And after playing 48 minutes down to the last play on Friday night against No. 5 A.L.Brown, the fourth-seeded Bobcats fell, 37-29, in the first round of the Class 4A playoffs.

Down 37-29, Glenn (8-4) took over at its own 12-yard line with 42.5 seconds left and no timeouts. Junior quarterback Stephon Brown threw a 38-yard pass to Kier Meredith on the first play to give the Bobcats a first down on the 50 with 31.2 seconds left. Four plays later, Meredith caught a 15-yard pass at the 16 with 9.9 seconds left.

Brown misfired to Dysaun Razzak on the next play in the end zone, and with 5 seconds left, Brown threw it just over the shoulder of Razzak to end the game.

“I saw the right thing, but I just didn’t execute the way I was supposed to,” Brown said. “I felt we did the right thing. I’ll just take this one on the head, and we’ve just got to get it back next year.”

Brown finished 13-for-34 passing for 297 yards and two touchdowns and two interceptions. The Bobcats had trouble getting their offense in a flow because the Wonders finished with 22 penalties for 168 yards, many of which were holding or interference calls on Brown’s passes.

“I felt like the guy was even holding on the last play, but it’s the officials’ call,” coach Antwon Stevenson of Glenn said. “It can go one way or the other. Anytime, you don’t want to end the game like that, as far as calling the penalty and changing the game. It is what it is. The guys played hard.”

Brown improved to 9-3 and will play at No. 1 Davie County in next week’s second round.

Friday’s game looked out of reach for the Bobcats after the Wonders’ Equaris Baldwin intercepted Brown at the Bobcats’ 38. Baldwin scampered 38 yards for a touchdown, helping the Wonders take a 37-22 lead with 11:08 left in the fourth quarter.

“My coaches, they told me to help over the top, so that’s what I did and came out with the interception,” Baldwin said.

Baldwin added that all the penalties on defense didn’t get them down.

“We were getting frustrated, but we’ve been saying, whatever happens stay as a team,” he said. “So that’s how that went.”

The Wonders had trouble moving the ball their final three possessions and couldn’t run out the clock, giving the Bobcats a chance to get back in the game. The Bobcats scored on a 1-yard run by Razzak with 3:52 left to help trim the lead to 37-29.

The Wonders turned the ball over on downs with 52.7 seconds left and allowed the Bobcats a chance to tie the game on the final possession.

“Again, I had already messed up a few times before that. I was nervous the whole game with that bunch because they could score at any time,” Newsome added.

By Brian Pitts For the Salisbury Post MOCKSVILLE — It was not the most inspiring start for Davie County’s football team,... read more