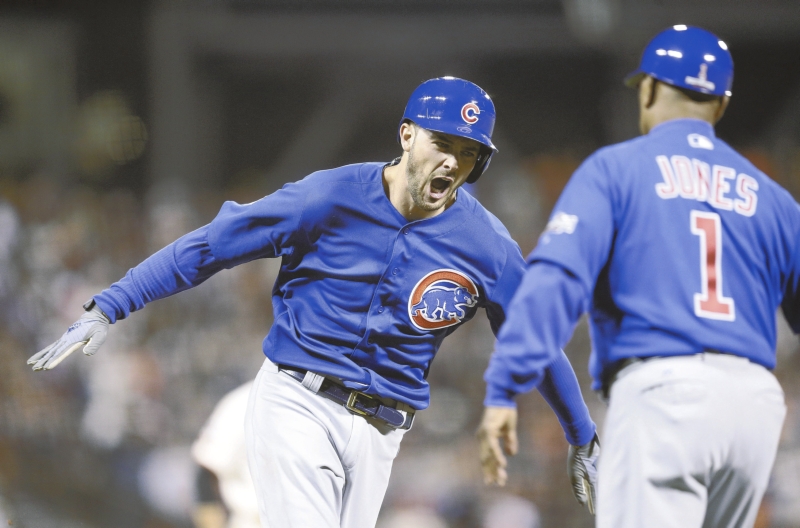 FILE - In this Oct. 10, 2016, file photo, Chicago Cubs' Kris Bryant, left, celebrates with third base coach Gary Jones (1) after hitting a two-run home run against the San Francisco Giants during the ninth inning of Game 3 of baseball's National League Division Series in San Francisco. Bryant, Daniel Murphy and Corey Seager are up for the National League Most Valuable Player award.(AP Photo/Ben Margot, File)

Just too good to ignore.

“To win it one time, it’s hard to do,” Trout said. “Twice, I guess you saw my emotions tonight, it was something special.”

While the Angels finished fourth in the AL West, Trout was his usual brilliant self. The center fielder batted .315 with 29 homers, 100 RBIs and 30 steals. He scored 17 percent of Los Angeles’ runs, the highest percentage for an AL player since Rickey Henderson with the 1985 New York Yankees.

Trout, who was a unanimous winner in 2014, had finished second in three of the past four years. He becomes the first MVP from a losing team since Alex Rodriguez for Texas in 2003 and just the fifth player ever to accomplish the feat, joining Hall of Famers Ernie Banks (1958 and 1959), Andre Dawson (1987) and Cal Ripken (1991).

Bryant hit .292 with 39 homers and 102 RBIs in just his second year in the majors, helping the Cubs to their first World Series title since 1908. The No. 2 overall pick from the 2013 draft becomes just the sixth player to win rookie of the year and MVP in one or consecutive seasons.

“This year has certainly been one of the best years of my life,” said Bryant, who is set to get married in January. “I mean winning a World Series, now this, it’s just icing on the cake.”

The Las Vegas native is the first NL MVP from the Cubs since Sammy Sosa in 1998 and the eighth player from the club to win the award since 1935. The once-forlorn franchise enjoying its best run in decades also had two of the top MVP candidates, with first baseman Anthony Rizzo finishing fourth.

Voting by BBWAA members was completed by the start of the playoffs.

Bryant was a runaway winner, grabbing 29 of 30 first-place votes and 415 points. Nationals second baseman Daniel Murphy, who batted .347 for the NL East champions, was the runner-up with the other first-place vote and 245 points. Dodgers shortstop Corey Seager was third after he was the unanimous winner of the NL Rookie of the Year award on Monday.

Seager will look to follow in Bryant’s footsteps next year.

Trout received 19 first-place votes and 356 points. Mookie Betts, who batted .318 with 31 homers, 113 RBIs and 26 steals in 158 games for the Boston Red Sox, was second with 311 points, and AL batting champion Jose Altuve of Houston was third. Retiring Red Sox slugger David Ortiz got one first-place vote finished sixth in his final year in the majors.