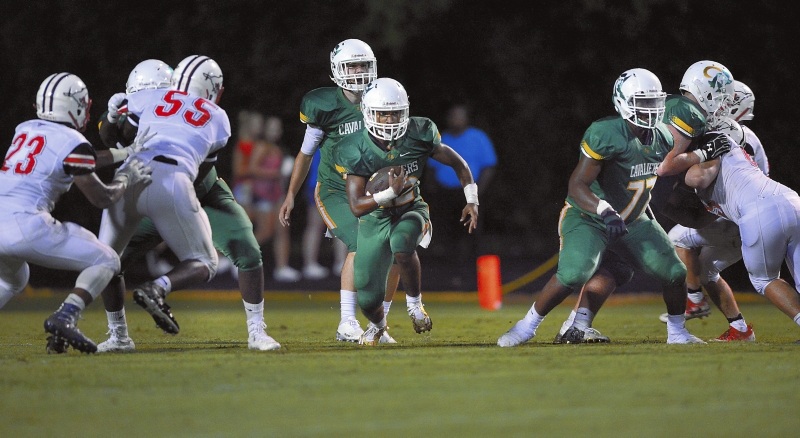 Wayne Hinshaw/for the Salisbury Post ... North Rowan’s offensive line opens up a big hole against East Rowan during the season-opening game on Aug. 19. Running back Jayden Jones, center, takes advantage of the blocking.

SPENCER — North Rowan’s rushing production is up 500 yards from last season and the Cavaliers give up about two sacks per month.
So give some of the credit for the turnaround from a losing season (5-7) to a 9-2 record to the offensive line.
North has had seven teams in its strong football history with double-digit wins. If the Cavaliers can take care of Friday’s home game against North Wilkes in the first round of the 2A state playoffs, they’ll become the eighth.
From left tackle to right tackle, North’s o-line includes junior Bryson Deal (6-0, 195), senior Josh Boger (5-11, 225), junior Will Anthony (6-2, 275), senior Taelor Davis (6-1, 240) and senior Terry Cathcart (6-0, 250).
That’s a good-sized group for a 2A squad.
“We’re a bigger line this year, and that’s really helped us,” Davis said. “We played hard last year, but we just didn’t have the size.”
Size matters and size splatters defensive linemen and linebackers. North’s main back Jaleel Webster has jumped from a 348-yard season as a sophomore to the brink of being a 1,000-yard guy as a senior.
The most telling number is that North’s average yards per rushing play this season is 6.3. Last season it was 4.0.
North also throws the ball capably, using its strong ground game to set up the pass. Corbin Smith has thrown for 1,300 yards and 17 touchdowns.
“Our pass blocking has usually been unstoppable,” Davis said.
The Cavaliers appear to be getting more efficient. Their offensive numbers picked up in their five Central Carolina Conference victories that closed the regular season.
“Almost 1,300 rushing yards in those five games behind those offensive linemen,” North coach Ben Hampton said. “And we had our quarterback drop back to pass 89 snaps in those five CCC games with only one sack allowed.”
For the season, Hampton said the Cavaliers have allowed just seven sacks on 221 passing attempts, and that’s including the struggles against the best teams North has faced — 4A Davie County and 3A South Iredell.
“Corbin has been a much improved player, and the offensive line has been a big part of that,” Hampton said. “They’ve made him a different quarterback by giving him adequate time to go through his reads and progressions.”
The transformation of North’s offensive line actually started in spring camp with Cathcart moving from defense to offense. He was a solid defensive lineman last season, contributing 31 tackles in eight games. But North was well-stocked with defensive-line studs, so Cathcart made the move.
“The coaches explained to me that I might have to sacrifice individually, but it would be for the good of the team,” Cathcart said. “I wanted to help the team, wanted to do whatever I could to make us beter.”
Hampton said offense has proven the right fit for Cathcart.
“When you bring a defensive lineman over to offense, you expect him to be physical and to be athletic,” Hampton said. “Terry has been those things for us, and he picked up things very quickly.”
By the third day of spring camp, North had settled on a new line, with Anthony, who was making a return to football at center. That freed Davis to move from center to guard.
“Getting Big Will back out here made a huge difference for us,” Hampton said. “Davis moves so well that his strength is on plays where he can pull. He’s been really good for us at right guard.”
When Anthony was temporarily “retired” from football, he became a recruiting target for the whole school because 6-2, 270-pounders don’t grow on trees in Spencer. Everyone knew Anthony should be playing, even when Anthony didn’t.
“”My dad wanted me to play, Coach Hampton bugged me just about every day about playing, and my teammates kept after me,” Anthony said with a sheepish smile. “Basically, everybody kept after me. I really don’t even remember why I stopped playing. I just know it feels good to be back. It’s a great feeling to walk out there with your teammates and knowing that you have a chance to dominate.”
Deal and Boger aren’t huge guys on the left side, but they’ve done their share, and Hampton said the Cavaliers haven’t had to use defensive lineman Steven Thurston at guard as much in recent weeks.
“That’s been a plus,” Hampton said. “Because we ask an awful lot of Thurston on defense — 3-technique, nose, even moving outside some. And he’s on every special team.”
North’s offensive linemen get coached up every week by Patrick Hampton, Danny Misenheimer and Daniel Overcash.
“I think we got a lot of the jitters out on opening night when we all played well against East Rowan,” Cathcart said. “Since then we’ve come together more every week. We’ve been doing our jobs in pass protection and opening some good lanes for the running backs.”
North Rowan faces an unusual challenge on Friday. North Wilkes is an old-school, smash-mouth, power team.
“They’re aggressive and they’re physical,” Hampton said. “It’s a game that’s going to be decided by that battle in the trenches.”
“Battle in the trenches” is music to the ears of North’s offensive linemen. They’ve been fighting those battles all season. Most of the time they’ve prevailed.
“Those guys probably get yelled at in practice more than anyone and they definitely get the least glory,” Hampton said. “But we all know we wouldn’t be where we are without them.”