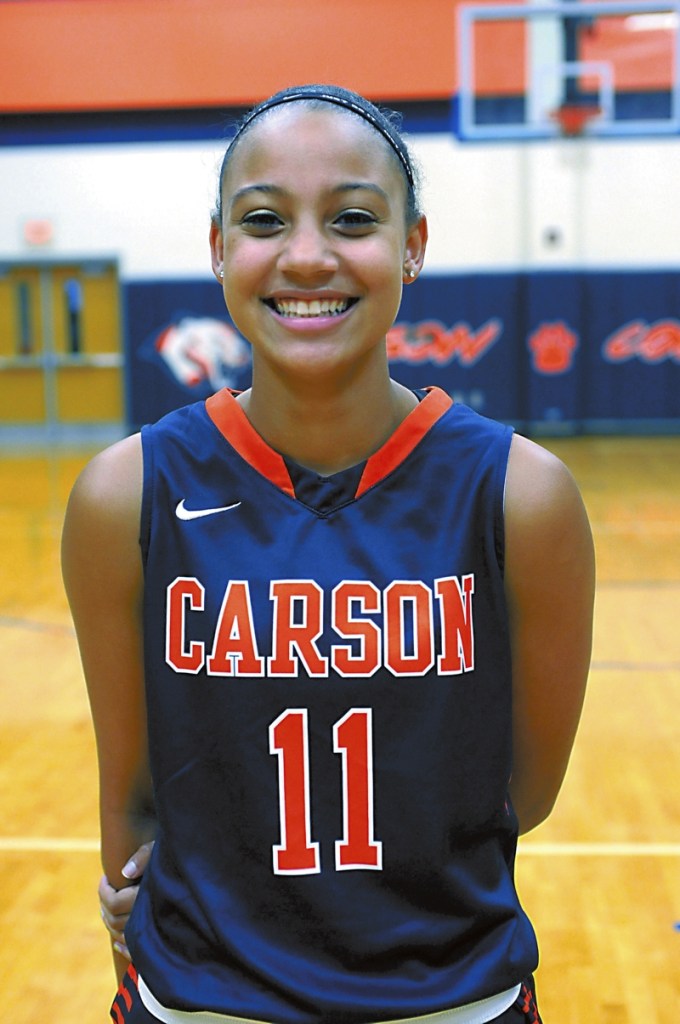 CHINA GROVE — Sophomore McKenzie Gadson scored 20 points, and Carson’s girls used a stellar start to beat A.L. Brown, 60-45, on Thursday in the Carson gym.
“We did have a very good start for so early in the season,” Gadson said. “But then we got sloppy.”
Carson, which returns its entire roster from last season, looked great for about five minutes and put the Wonders in an 11-2 hole.
But then the Wonders settled in behind senior floor leader Shemya Stanback. By the end of the first quarter, it was 15-7. Carson needed a banked, straight-on 3-pointer from Olivia Gabriel to hold a 24-17 halftime lead.
“I thought we really made things hard on ourselves,” Carson coach Brooke Misenheimer said. “We started the game doing everything we’d talked about — play solid defense, get the stop, get the rebound, score in transition. But then we got away from that.”
The third quarter was played at a frantic pace, with whistles filling the air and foul trouble piling up for both teams. When Stanback scored off the offensive board and followed with a pull-up jumper, the Wonders trailed 33-28 with 1:15 left in the third quarter, and had momentum.
“I really liked the way we fought back,” A.L. Brown coach Lamont Johnson said. “We didn’t hang our heads.”
Kailie Ketchie stroked the big 3-pointer for the Cougars that halted the Wonders’ run.
Then Maren Shumaker grabbed a defensive board and fired a baseball pass to Gadson streaking ahead of the pack for an easy two. Gadson slashed for another bucket as the quarter ended, and Carson had restored its lead to 42-30.
But there was a long way to go, and foul woes were getting serious. Gabriel, Carson’s point guard, got her fourth with 7:37 remaining and sat down. Shumaker, tough rebounder and charge-taker, got her fourth 35 seconds later and joined Gabriel on the bench.
The Wonders may have able to slice into Carson’s lead, but with 4:37 left, Carson’s Micah Furr boxed out on the defensive board, and the result was the fifth foul on Stanback.
“We lost our coach on the floor,” Johnson said.
With four minutes left, Gabriel returned to the court, and Carson tried desperately to finish things off with its delay game. That got more challenging at the 2:53 mark when Gabriel was called for an offensive foul and exited the game with 13 points.
With 2:24 left, A.L. Brown senior Nikki Lyerly made a steal and an athletic, whirling scoop shot, and Carson’s lead was down to 48-41.
But then Lyerly, the Wonders’ other veteran guard, was out of the game, too. Furr worked for the fourth foul on Lyerly by taking a charge. Then Lyerly got her fifth foul when she tried to take the ball away from Taylor Wiggins with 2:22 to go.
With Stanback and Lyerly both banished, Carson steadily pulled away at the foul line. Destiny Jackson made five free throws in the final quarter.
Carson got 16 of its 18 points in the fourth quarter on free throws. Gadson had the only bucket, using her sure hands to haul in a long pass from Ketchie and gliding past the Wonders to the rim.
“That whole second half just wasn’t very pretty,” Misenheimer said with a sigh. “It’s a win, but we all know we’ve to get a lot better than this.”
The Wonders are quick and played two freshmen a lot. One of those freshmen, Jaliah Simmons, had a team-high 11 points.
“We’ll learn from this loss,” Johnson said.