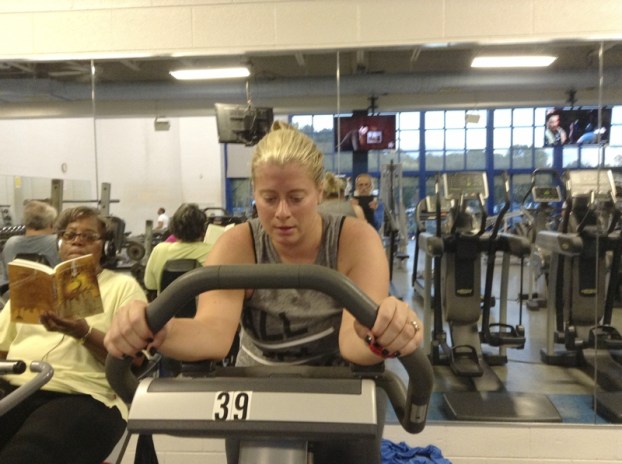 Wellness journey: Steps in the right direction from the Ditto Duo Michelle Patterson finished as the top female in the Bostian Elementary 5K
on Nov. 5. Photo by Richard Taylor

When last we visited, both Jennifer Payne and Michelle Patterson were struggling. Struggling with work, family issues and their own commitment to exercise. Both women told me that they were in the program to stay and were going to make the best of the last three months.

So here is what they did in October. Jennifer, a Novant Health administrator, has been working long hours and has mostly been exercising at night. She has added a regular kettle bell routine at home and likes it.

“I truly enjoy doing Zumba Pound and have kept my heart rate in the 150s while doing it,” Jennifer said. “And I am watching every calorie that goes in my mouth. I don’t go to the vending machine. My snacks are now carrots and hummus.”

While not seeing the success that she wants with the scale, Jennifer’s weight has at least stopped going in the wrong direction.

“I want to see the scale move, but I can see the difference. I personally feel that I am in the groove again,” she said.

Michelle, head of marketing and tours for Patterson Farms, has just finished off pumpkin season.

To Michelle’s credit, she did run several times a week at 5:45 a.m. Lately we have struggled with the dark sidewalks and bright headlights of the streets of early morning China Grove. Michelle can handle a 5-mile run now and has been doing her favorite Butts and Guts class at the South YMCA.

Although Michelle is near her goal weight, she knows she has some places to improve.

“I know that I have to improve my nutrition and hydration,” she said. “The days have been so hectic at the farm that I didn’t have time to drink enough water, and if I did, I didn’t have time to go to the bathroom. Going forward, I will drink and eat better and spend some time recharging.”

Speaking of improvement, I asked both women to add some things to their regular workouts as October was ending. Specifically, I asked Jennifer to include some harder cardio workouts and asked Michelle not to be happy with easy social exercising. I had seen them both focusing hard for results and getting them as they pushed through the first half of 2016. I asked them for the same intensity again.

From that conversation, Jennifer, usually the quieter of the two women, bucked up a bit and stated a few reasons for what I had termed lackluster performance in September and early October. Michelle responded quickly by text with a simple “Ditto!” With that, I now refer to them as the “Ditto Duo.”

Michelle will have a much easier workload for the rest of the year, but her family has a few surgeries and medical issues coming up. She also is entering the time of year when she attends various conferences. She helps coach the West Rowan High swim team. Jennifer doesn’t see a break in her work schedule.

Going forward, Jennifer plans to exercise seven days a week. We will modify that just slightly. She has limited her calories considerably, possibly too much.

“I have found exercises that are good for me,” she said. “My husband has said he is going to get me a really good exercise machine for our home!”

I asked Jennifer to also make sure that her hydration is adequate.

At the Bostian Elementary 5K on Nov. 5, Michelle’s first race since the start of pumpkin season, something miraculous happened. Michelle was the first female finisher while also the oldest female in the race. She is planning multiple 5Ks for the rest of November.

I told Jennifer and Michelle that Brent Parks and Norma Honeycutt, last year’s fitness focus stars, poured it on during the last two months. I am confident that this year’s team will do the same. At the end of November, I expect the most positive report since the end of May. These girls have what it takes, but the proof will be in inches and pounds. Calories in and calories out, that’s the name of the game. On we go with two women who are investing in themselves.

See you at the end of November with more from the Ditto Duo!