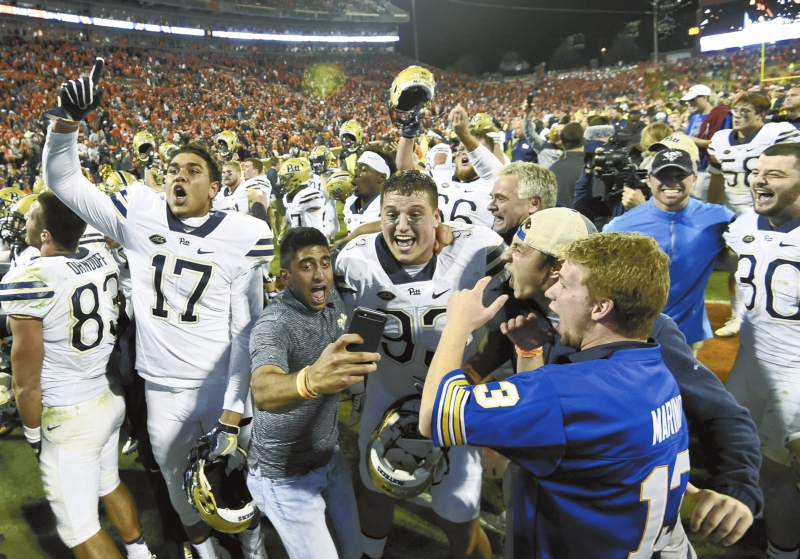 Pittsburgh players and fans celebrate on the field after defeating Clemson 43-42 in an NCAA college football game on Saturday, Nov. 12, 2016, in Clemson, S.C. (AP Photo/Rainier Ehrhardt)

CLEMSON, S.C. (AP) — James Conner’s smile said it all — Pittsburgh was happy to once again shuffle up the national championship picture.

“Hey, sorry to do that. But we wanted this one bad,” said Conner, who had two touchdowns and ran for 132 yards in the Panthers’ 43-42 stunner over No. 3 Clemson on Saturday.

Conner’s 20-yard TD run with 5:17 left inched the Panthers into striking range and Chris Blewitt — after a kiss on the cheek from coach Pat Narduzzi — struck a perfect, 48-yard field goal with six seconds left for the winning points.

So, too, will Clemson (9-1, 6-1 Atlantic Coast Conference) which saw its run at perfection halted after escaping so many other jams this season. A fourth-down stop a yard shy saved the Tigers’ 42-36 win over No. 5 Louisville on Oct. 1. North Carolina State’s missed field goal at the end of regulation boosted Clemson to a 24-17 overtime win.

When Clemson was driving for a touchdown already up 42-34, linebacker Saleem Brightwell picked off quarterback Deshaun Watson — his third interception — and returned it 70 yards to set up a 20-yard TD by Conner that drew Pitt within 42-40.

When Clemson attempted to run out the clock, the Panthers defense (despite allowing 630 yards) stuffed Wayne Gallman a yard short on third and fourth downs to take over near midfield with 58 seconds left.

“We had a chance to put the game away and they stopped us,” Clemson coach Dabo Swinney said. “We had been making those kinds of plays this year.”

Nathan Peterman moved Pitt to the Clemson 30 and Blewitt steadily knocked through.

It was Pitt’s highest-ranked win since defeating Backyard Brawl rival, No. 2 West Virginia, 13-9 in 2007 and spoiling the Mountaineers’ chances at playing for the national title.

“Our team had a lot of guts tonight,” Narduzzi said.

And a whole lot of playmakers to topple the defending ACC champs.

Peterman had a career-best five TD passes and 308 yards. Conner rushed for 132 yards and a touchdown. He also caught one of Peterman’s scoring throws.

Blewitt, who had a kick blocked at the end of the opening half, was steely eyed and ready. Narduzzi gave his senior a kiss on the cheek and sent him out for the winning kick.

“As soon as I saw the kick go up, I knew it was going in,” Scott Orndoff said. “It was jubilation.”

Clemson had its offense going. Watson threw for an ACC record 580 yards and three touchdowns. Gallman ran for three TDs and Mike Williams had 15 catches for 202 yards and a touchdown.

In the end, it was Clemson’s first loss to an unranked opponent in five seasons, a span of 46 games.

“Come Monday, we’ll start over because it’s a long season,” Watson said. “Get ready for Wake Forest. Hopefully, we can clinch the ACC (Atlantic) and punch our ticket” for the championship game next week.

Pittsburgh: The Panthers showed that Narduzzi’s program is taking hold. Peterman stayed calm in the face of Clemson’s strong pass rush and Conner was able to avoid the Tigers’ middle duo of Carlos Watkins and Dexter Lawrence to keep Pitt moving.

Clemson: Many non-Tiger fans will say this team had it coming after escaping with close wins at home against No. 5 Louisville (42-36 on Oct. 1) and North Carolina State (24-17 in overtime on Oct. 15) after the Wolfpack missed the potential game-winning kick to end regulation. Clemson’s path is still clear — win out and hope its one-loss season is better than most others.

Expect a rankings fall for Clemson, certainly from the top five. And there’s not that much time left to make up for a loss. After Wake Forest, the Tigers face revived rival South Carolina at Death Valley before potentially heading to Orlando, Florida, for the ACC championship game.

Watson’s passing yards broke the 21-year-old mark of Wake Forest’s Rusty LaRue, who passed for 545 yards against North Carolina State on Nov. 18, 1995. Watson said the record doesn’t console him after the loss. “I’d rather go 0-for-30 with no yards and get the W,” he said.

This wasn’t the farewell Clemson’s offense wanted. Watson, Gallman, Williams and receiver Artavis Scott are all juniors who were honored with Clemson’s seniors Saturday after Swinney said they would all be leaving the program for the NFL after this season. Watson acknowledged wild emotions. “Still, I’m going to keep a smile on my face,” he said.

Pittsburgh closes the year with two games at home, starting with Duke next week.

Clemson will try to earn the ACC Atlantic Division title with a win at Wake Forest next Saturday.