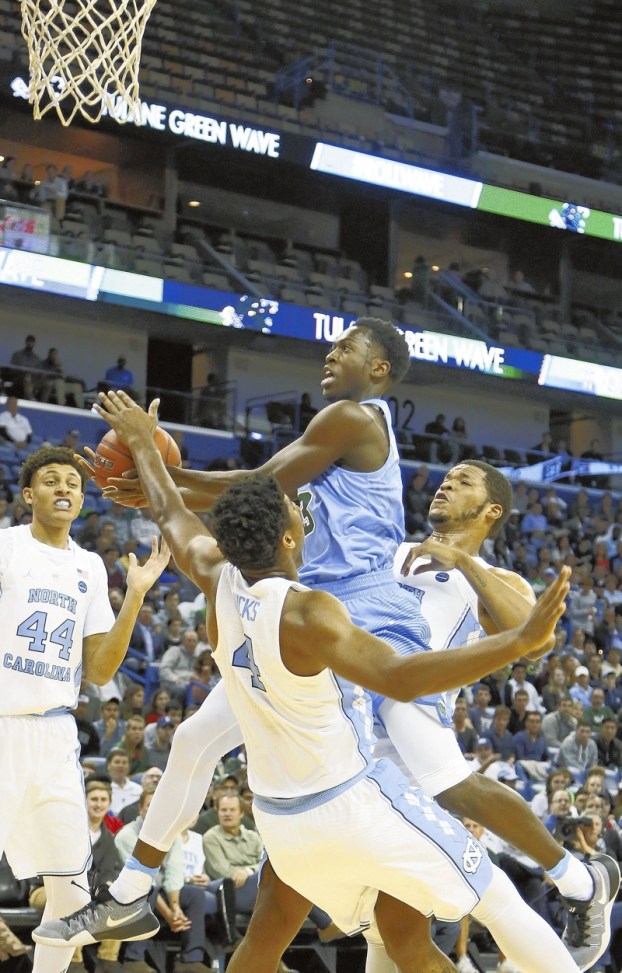 No. 6 Tar Heels open with win over Tulane

NEW ORLEANS (AP) — Justin Jackson scored a career-high 27 points, hitting four 3-pointers amid an array of shots from inside and out, and No. 6 North Carolina never trailed its overmatched host, defeating Tulane 95-75 on Friday night in the regular season opener for both teams.

Joel Berry II had a career-high 23 points, Isaiah Hicks scored 16, and Kennedy Meeks grabbed 15 rebounds — including seven on the offensive end — for the Tar Heels, who never trailed and led by as many as 21 points.

The game marked the college coaching debut for former NBA player and coach Mike Dunleavy, but his Tulane squad simply lacked the talent to stay with a team that lost last season’s national championship game to Villanova on a last-second shot.

Cameron Reynolds scored a career-high 21 points, hitting five of six from 3-point range. Tulane struggled to get open looks near the basket against North Carolina’s imposing interior, but the Green Wave hit 12 3-pointers to account for nearly half of its points.

North Carolina: The Tar Heels wound up being as dominant in this matchup as they were expected to be, despite an early lull that allowed Tulane remain close for much of the first half. Berry looks ready to take charge and be a playmaker on both ends of the court. Hicks looks formidable from 10 feet in, and Jackson demonstrated that he’s ready to contribute even more than the 12 points per game he supplied last season as North Carolina looks to repeat as Atlantic Coast Conference champions.

Tulane: While there was never any evidence that the Green Wave possessed enough talent to compete with a traditional college basketball power like North Carolina, Dunleavy has the Green Wave playing with more purpose and poise than they displayed a year ago. Tulane’s shooting accuracy also appears to have improved considerably, at least from the perimeter. Time will tell if the former NBA coach can make Tulane into a factor in the mid-major American Athletic Conference.

North Carolina, which came in as a 21-point favorite, found Tulane to be a feisty opponent early. Trailing 20-19 more than 10 minutes into the game, the Green Wave had several chances to take the lead, but Reynolds missed a 3, Reyes missed a putback, and after Tulane got the ball back again on Berry’s turnover, Ona Embo was called for a charge with 8:42 left in the first half.

That’s about when Berry seemed to infuse the Tar Heels with some extra intensity, starting with his fluid alley-oop lob from the top of the key to set up Hicks’ dunk. Berry then stole the ball from Ona Embo and quickly fed Jackson for a layup. Berry then hit a 3 and added a free throw to make it 31-22 as North Carolina began to pull away. Berry’s second 3 of the game made it 44-29, and Hicks’ dunk made it 46-29 before Tulane’s Von Julien hit a 3 to make it 46-32 in the final seconds before halftime.

Officials awarded North Carolina a technical free throw after a fan tossed a mini, palm-size basketball on the court. Officials said it was the second time in the game a fan had tossed an object onto the court. Berry hit the free throw.

North Carolina performed as expected against over-matched Tulane, so voters might be inclined to keep the Tar Heels about where they are unless one of the five teams above them stumbles.

By Mike London mike.london@salisburypost.com SALISBURY — Eight Indians, including an under-the-weather Terri Rogers, were able to suit up for Catawba’s... read more