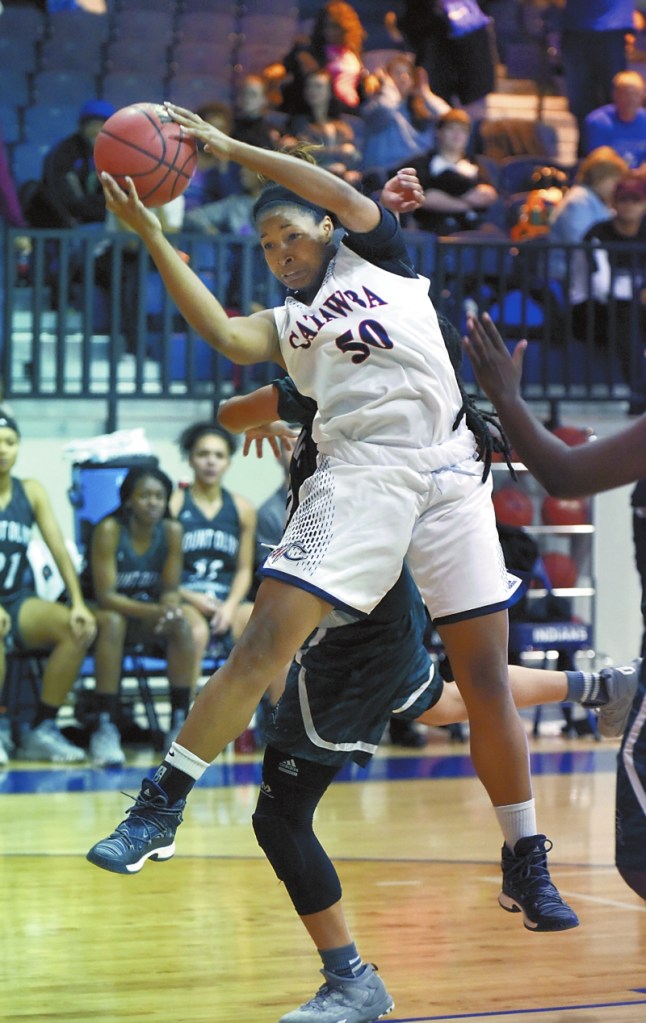 SALISBURY — Terri Rogers’ three-point play with 21 seconds left broke a tie, and Serena Brown clinched a wild Catawba victory with two free throws with 5.5 seconds remaining.
The Indians (2-0), who have eight healthy players, overcame 22 turnovers and beat Barton, 74-69, for their second dramatic win in two days at Goodman Gym.
It was 66-all with 1:10 remaining when Barton, mostly concerned with Rogers and high-scoring guard Bri Johnson, backed off Brown, Catawba’s pass-first point guard, when Johnson flipped the ball to her left of the circle.
“I saw no one was rotating over, so I let it go,” Brown said.
Brown swished a huge shot, but Catawba’s joy didn’t last long. With 42 seconds left, Barton’s Tatyana Jackson answered with a bomb, and it was 69-69.
After a timeout, Catawba worked the ball patiently, getting good high-low action from Rogers and Alexis Newbold. Newbold went up for a layup on the right side, but didn’t get a whistle as she was knocked to the floor. Fortunately for the Indians, Rogers hadn’t assumed success. She had a free run to the glass, and when Newbold’s attempt sailed over the rim, Rogers was in ideal position for the decisive three-point play.
“I saw that ball coming to me, and I knew it was going to be a good opportunity to make contact and still make the shot,” said Rogers who had 19 points and 10 rebounds. “Do your job and clean it up. That’s what the coaches tell me to do when we miss.”
She cleaned it up nicely.
Johnson was brilliant in the first half, shooting 4-for-5 on 3-pointers and getting 19 of her 22 points before the break. She and Marshauna Butler, who finished with 14 points and eight rebounds, kept Catawba in a ragged game. Catawba turned it over 16 times before halftime but managed a 35-all deadlock.
“They were getting half their points off our turnovers,” Brown said with a sigh. “We had to cut down the TOs,”
Rogers picked up her second foul with 8:09 left in the second quarter. Morton sat her for the rest of the half. That turned out to be a great decision.
“Terri got some rest, and we were able to stay close without her,” Morton said. “Newbold gave us some good minutes. She was a presence.”
Rogers wasn’t a factor in the first half, but she would score 16 of her 19 points after the break and finished with 10 rebounds.
“In the second half, we brought Terri out high and we were able to get her in some isolations,” Morton said. “We got her the ball with enough space to make a move.”
Catawba was able to take a 52-47 lead in the third quarter when Butler got the ball to Morgan Franklin for a 3-pointer, but Barton bounced right back.
Catawba trailed for the last time at 64-63 when Cierra Williams made two free throws for the Bulldogs with 3:26 remaining, but Brown immediately spotted a sprinting Rogers for a layup and a one-point lead.
It all came down to Rogers’ three-point play in the final minute. Then Johnson provided tight defense on a three-point try by Jackson that missed everything with eight seconds left.
Brown, who had 12 points, 10 boards and four assists, then calmly secured victory at the foul line.
“We shoot a lot of free throws in practice, and if we don’t make 80 percent we have to run,” Brown said. “So we’re used to making them. We’re confident in those situations.”
Catawba shot exactly 80 percent from the line on Saturday (16-for-20) and somehow out-rebounded a taller team, 42-24. Catawba had 18 offensive boards. That helped compensate for 13 Barton steals.
“Way too many turnovers,” Morton said. “But we found a way.”
Kianna Wynn had 19 points and eight rebounds for the Bulldogs (1-1).
Catawba plays at Johnson C. Smith on Tuesday.