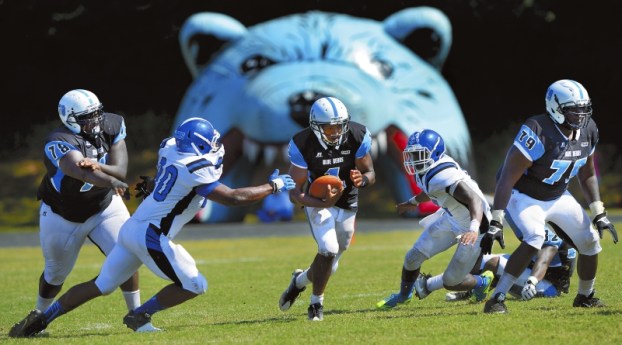 Livingstone's QB Xavier Longerbeam (1) runs up the middle in a game earlier this season. Photo by Wayne Hinshaw, for the Salisbury Post

SALISBURY — NFL Hall of Fame coach Bill Parcells once said: “You are what your record says you are.”

The cold, hard fact is that Livingstone’s football team was 2-8 this season, one that ended last Saturday in Charlotte, a 30-8 defeat to rival J.C. Smith.

But head coach Daryl Williams said Tuesday that despite the Blue Bears’ record, the team never quit on the coaching staff.

“It was an up and down season, a trying year,” said Williams, “but I was very pleased with the guys’ effort. They gave us great effort, no matter what the score was.”

Coming off a 5-4 record in 2015, the school’s first winning season in football in 17 years, Williams had been optimistic that the winning ways would continue — even though All-CIAA and four-year starting quarterback Drew Powell had graduated.

Last year’s receiving corps, including another all-conference performer in Jalen Hendricks, also graduated, as well as some key linemen on both sides of the ball.

Those personnel losses, as it turned out, were too big to overcome, especially on the offensive line. Four different first-year quarterbacks were sacked a total of 45 times for 260 yards.

“We’re started the recruiting process, of course, and the lines will be a priority,” said Williams. “We’ve got to get more athletic on both lines, so we’ve hit the reset button there.”

One of those quarterbacks, Xavier Longerbeam, a red-shirt freshman transfer from Florida A&M, started the last six games after getting cleared to play. He played well enough to be selected to the CIAA’s All-Rookie team, which was announced on Tuesday.

Also making the All-Rookie team from Livingstone was cornerback Brian Dickerson, who tallied 23 tackles, 15 of them solo stops and he had seven pass breakups. Dickerson is a freshman from Riverdale, Ga. Williams said that Dickerson was a walk-on that the Blue Bears got late in the recruiting season.

Longerbeam threw for 982 yards and completed 93 of 158 attempts, nearly 60 percent. He also passed for nine touchdowns but on the downside, threw six interceptions.

“Even though Longerbeam made the All-Rookie team, we still have a long way to go there, to get stability at the quarterback position,” said Williams. “Whoever is in there, we’ve got to improve the decision-making and stop the bad passes, those pick-sixes that can completely turn around a game.”

Livingstone had 29 turnovers for the season, putting it near the bottom of NCAA Division II in that category. The Blue Bears had five turnovers last Saturday which greatly aided J.C. Smith’s performance. Livingstone led early, 8-0, and it was 8-8 at halftime. Like so many games this season, an early-second half turnover changed the momentum.

“You can go back and look at each loss and see a play here, a play there, that completely started the ball rolling toward a bad outcome,” continued Williams. “But we’ll get it fixed. It’s going to be an intense offseason and spring practice next year.”

“I hate that the seniors had this type of season after tasting success last year, but we just didn’t get it done,” added Williams. “Our young guys learned the hard way that you’ve got to play and not make excuses. Don’t look back and say ‘I should have done this or that.’ Just do it when the opportunity is there.”

•Sophomore receiver Everett Ransom finished second in the CIAA with 60 catches for 709 yards.

•Junior running back Jarius Richardson was ninth in the conference in rushing with 659 yards and eight TDs. He averaged 4.9 yards per carry.

•The Livingstone defense was ranked third in the CIAA, allowing just 339 yards per game. The points per game (32.2) didn’t match, another indication of the offensive turnovers putting the defense in short-field situations.

NOTES: Williams completed his fourth season and is now 15-24 since taking over at Livingstone before the 2013 campaign. To put that in perspective, the Blue Bears were 2-38 in the four years prior to Williams’ arrival.  … Williams fought his own health battles during the season, including surgery on his back, but did not miss any games. “I’ve been feeling much better lately,” said Williams. “I’m hoping for no more problems because there were times that I just couldn’t function like I wanted to.”