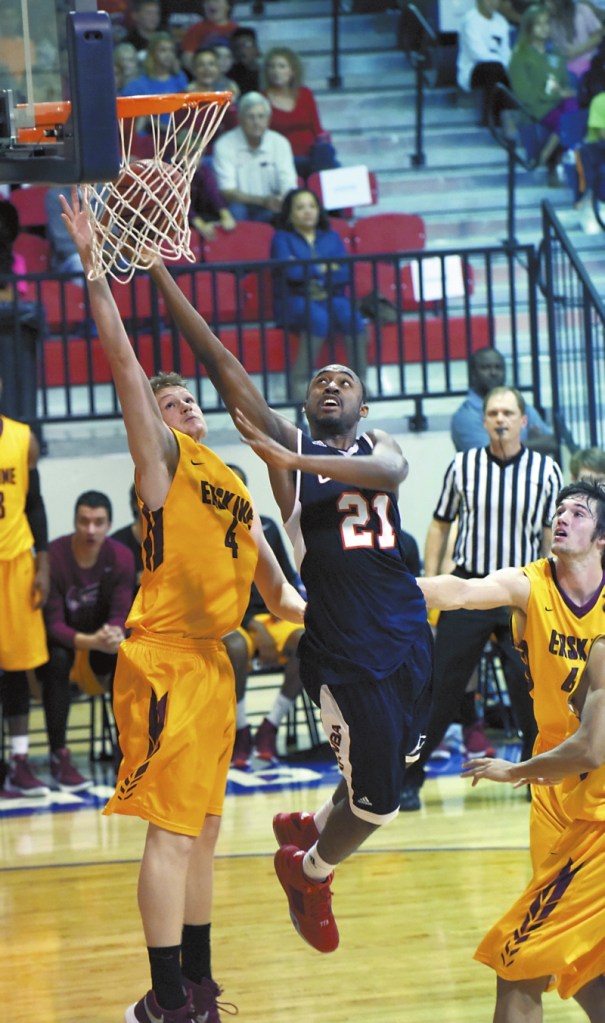 SALISBURY — Catawba men’s basketball returns nine of its top 11 scorers and adds three athletes to the mix who figure to be among the team’s best players.

That doesn’t sound like a fifth-place team. So why were the Indians picked fifth in the South Atlantic Conference preseason poll?

First, the 12-team SAC is great at the top for a Division II league.

At last season’s Southeast Regional Tournament, not only did the SAC put four teams — Lincoln Memorial, Queens, Lenoir-Rhyne and Wingate — in the eight-team field, all four SAC squads won their quarterfinal matchups. Lincoln Memorial went on to win the regional and was national runner-up.

“I’ve been coaching a long time,” said Rob Perron, who enters his third season as Catawba’s head coach with a 28-32 record. “I don’t remember ever seeing a league go 4-0 at the regional level. I guess the positive is we beat two of those teams.”

The other reason the Indians don’t have a lofty SAC preseason ranking is that it’s been years since they were a factor. It’s not like they were a bad team last season — they were entertaining whenever they took the floor on Sam Moir Court in Goodman Gym — but the bottom line was 12-17 overall and 10-12 in the SAC for seventh place.

They’ll have to prove they can beat some of the bullies in the league before they’re recognized as a stud team. Their last winning season was back in 2009-10.

But there’s plenty of reason for optimism. This could be the breakthrough season.

“I’m excited,” Perron said. “We can be a more dynamic team than we’ve been. We’re a little more athletic. We’re a whole lot deeper.”

Catawba shot 43 percent last season, while opponents shot 45 percent. Reversing those numbers might mean five more wins. Catawba also needs to do better from the foul line where it shot 68 percent, while opponents were shooting 72 percent.

Catawba was a strong offensive rebounding team last season. The Indians also stole the ball a lot, and they forced 26 more turnovers than they coughed up.

“What we’ve seen so far in practice is that we’re good at scoring off misses and turnovers,” Perron said.

“Where we need to get better is spraying the ball around when we’re facing a set defense. We’ve got to find that hot hand and we want to attack with aggressive patience.”

Senior Kijuan Jakeem “KJ” Arrington is coming off an ACL injury that cost him all of the 2015-16 season, but two seasons ago “Swish” was an easy first team All-SAC pick. He was second in the league in scoring; seventh in rebounding.

Arrington, a 6-foot-5 marksman, can play three positions (2, 3 or 4) and he gives Catawba lineup options. He also creates matchup problems.

Jameel Taylor was Catawba’s finest player last season, and the 6-3 junior still pushes himself to get better every day. He scores, he rebounds, he passes, and he defends. He was second team All-SAC after leading the Indians with per-game averages of 16.9 points and 5.4 rebounds. When a player can drive like Taylor — and also shoots 44 percent on 3s — he’s a difficult person to stop.

Explosive junior Jerrin Morrison (12.4 ppg.) slipped a bit as a sophomore after a SAC Freshman of the Year season filled with sky-walking dunks, high-fives and great promise.

Morrison’s statistical dip was due to an ankle injury that cost him several games and limited him in another half-dozen. He’s a gamer and he knew the team needed his scoring punch, so he didn’t sit.

Perron points out positives for Morrison — more assists, fewer turnovers, a steadier floor game. Morrison is an accurate 3-point shooter, but he missed a lot of acrobatic, contested 2s and his field-goal percentage was under 40 percent. Arrington’s presence should mean easier looks for Morrison, and he’s talented enough to have a monster season.

“Teams are going to have make choices,” Perron said. “Who do they put their best defender on? We’ve got guys who can score in bunches. Those guys can score 20 — in a half. They’ve all done it.”

Equally important will be 5-10 senior point guard Rakeen “Rock” Brown, who was injured two years ago, but came back strong last season. Brown averaged 9.6 points and distributed a team-high 78 assists.
Brown is pass-first, but he’s a capable shooter and he can finish drives. At the end of tight games, Perron puts the ball in his hands.

“We want Rock to make that decision,” Perron said. “He can make the big shot or find the open guy.”
An intriguing newcomer is long-armed, 6-foot-4 senior Gilbert McGregor. He’s the son of the original Gilbert McGregor, one of the first African-American players at Wake Forest in the 1960s, and then a well-known sports broadcaster.

McGregor played as a freshman at Newberry and made the Wake Forest team through walk-on tryouts after transferring to his father’s school.

McGregor has a degree from Wake Forest, but he also had a redshirt year, so he still has a season of eligibility. He’s chosen to spend it with the Indians. He was an All-State player in Louisiana as a prep senior and will help Catawba’s rebounding, mid-range shooting and defense.

Catawba also welcomes back 6-6 Malik Constantine, a talented player from Charlotte. Constantine’s freshman year ended shortly after it began with a season-ending injury. But he’s healthy now and still has four years of eligibility.

There are proven veterans back. Senior Troy Warren is 6-9 and is Catawba’s strongest defensive presence. He averaged 5.8 points and 5.1 rebounds and led the team in blocked shots.

Jeremy McLaughlin is a 6-7, hustling, blue-collar guy who doesn’t mind doing the little things and the dirty work. He was more valuable last season than his averages (4.6 points, 3.9 rebounds) indicate.

“We had four big guys last year (Julian Sampah and Vismantas Marijosius are gone), so we could kind of see who was playing well and go with them,” Perron said. “We’ve only got two of those bigs now, so we need Troy and Jeremy to be solid every night.”

Andrew Ingram is a 6-3 senior with a nice outside shot. He averaged 7.3 points per game.
Senior Ben Sealey (5-9) gives Catawba another ball-handler and another 3-point shooter. He was 40 percent from long range last season.

Jordan Barber, a 5-10 sophomore guard, was a spot player as a freshman, but he’s quick, he can shoot the 3, and he should be a large part of Catawba’s future.

R.J. Robinson, an athletic 6-4 freshman, redshirted last season but is expected to contribute quite a bit this time.

Others on the roster include sophomores Brent Davis and Greg Childress, who played in 10 games last season, and freshmen Matt Edwards, Jamareon Clark, Malik Kelly and Stephon Stephens.

Catawba played OK, especially in the second half, at Maryland in an exhibition on Saturday and opens the season in earnest this weekend when it takes on Peach Belt teams Francis Marion and UNC Pembroke in Hickory.

The daunting news last week was Queens beating Division I Virginia Commonwealth in its exhibition game.

But no one said it would be easy.

If the Indians can just stay healthy — they haven’t the last two seasons — they can make some noise.
•••
Stories are upcoming on Taylor and Arrington.