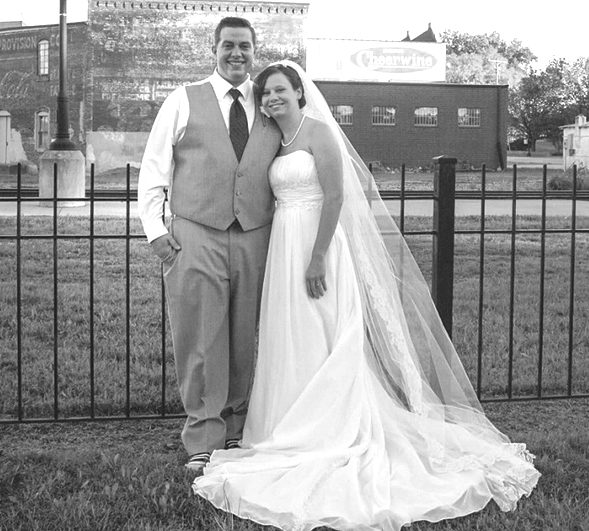 Crystal Jaynine McClanahan and Stephen Ray Junior Carter were united in marriage Sunday, Oct. 9, 2016 at the Easy Street Garden in Salisbury. Chaplain Joey Spry officiated the 5:30 p.m. ceremony.
Following the ceremony, the bride’s parents and brother hosted a reception in the Heritage Room.
The bride was escorted by her father,  SFC (Ret.) Dana E. McClanahan Jr. Bridesmaids were Ashley Naylor,   Renee House and Abagail Carter, daughter of the groom. Groomsmen were Christopher Naylor, Danny Fogal and  Tyler Belk.
The bride is the daughter of Jackie Wilson McClanahan of Salisbury and Dana “Chip” McClanahan Jr. of Phenix City, Ala. and the granddaughter of Dana E. McClanahan Sr., Carl H. Wilson of Salisbury and the late Nancy E. McClanahan and Patsy M. Wilson. A 2009 graduate of Salisbury High School, Crystal is currently attending Rowan Cabarrus Community College (RCCC) and employed at Sweet Frog of Salisbury.
The groom is the son of Jimmy and Sandy Carter of China Grove and the grandson of Gertie Carter, the late Walter Junior Edler, Cecil Walker Edler and Marcella “Marcie” Deal Edler. A 2007 graduate of Carson High School and RCCC, he is employed with the City of Salisbury’s fire department.
The couple honeymooned in Washington D.C. and will reside in Salisbury.
The couple would like to thank all of the family and friends that stepped in and made this event possible in 48 hours due to the cancellation of the original event, planned in Savannah, Ga., due to Hurricane Matthew. A special thank you to Jeremy with The Smoke Pit, K&W Cafeteria, Officer Crystal Hogan and South Salisbury Fire Department.

Reggie and Diane Wike are pleased to announce the engagement of their daughter, Regan Alexandra Wike to Corbin Thomas Shive... read more