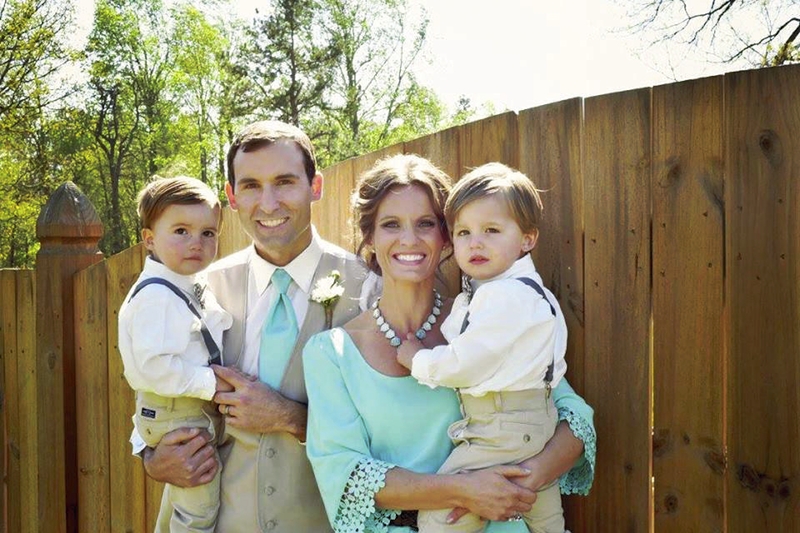 Facebook photo ... Zach and Cassie Thompson in June of this year, with twin 3-year-olds Brooks and Parker.

He was the new guy. The first Erwin Eagle who walked over and talked to him, befriended him and showed him the ropes was Zach Thompson.

That youthful act of kindness was two decades ago. Tonight, as South Rowan plays a high school football game at East Rowan, Alexander will do his best to reciprocate. He’s led the charge and the organizing as people rally to support Thompson, who now teaches at South Rowan.

Many of Thompson’s former East teammates are expected to be present at tonight’s game and will have a role in the pre-game coin toss.

Grey wristbands will be sold as a fundraiser. You’re also going to see all-grey jerseys from the Raiders. Grey is the color for brain cancer awareness. That’s the disease Thompson and his family are fighting.
•••
Alexander never became a varsity football player at East Rowan, although he stayed friends with many of the players, including Thompson. Instead it was East’s ROTC program that stoked his interest. When he wasn’t working at Food Lion, he was pouring his energy into ROTC and preparing for a military career.

Thompson did become a good football player for the Mustangs and coach Jeff Safrit during three exciting seasons when East won 25 games and shared the 1997 South Piedmont Conference championship with Concord and A.L. Brown.

A.L. Brown won the 3A state championship in 1997 with a team led by state player of the year Nick Maddox. The Wonders were 15-1. The loss was to the Mustangs. East was that good.
The 6-foot-3 Thompson was the starting tight end from 1996-98. He wore an unusual number for a tight end — 31 — and he was an All-Rowan County player. He caught 50 passes for 897 yards and five touchdowns.

As Thompson headed to East Carolina to get an education, majoring in marketing and business, Alexander joined the Air Force.

He maintained mechanical and electrical systems and became an expert in aircraft armaments. He was proficient enough that he moved up to being a master instructor who taught others.

Alexander put in 13 years with the Air Force, then used his skills to make a smooth transition to the civilian sector as a schoolteacher.

He was taking an N.C. State business course online in 2012 when he had an unexpected reunion with Thompson. Thompson had just left the business sector for a teaching job and had been hired at A.L. Brown as a lateral-entry business, marketing and IT teacher.

“I saw a post online from a Zach Thompson,” Alexander said. “I responded to it: “You’re not the Zach Thompson from East Rowan, class of 1999, are you?'”

Of course, it was.

“Both of us were wanting to give something back to our community,” Alexander said. “And what better way to do that than as educators.”

After the Air Force, Alexander had started his teaching career in Sampson County — that’s the Clinton area, east of Fayetteville. He was hired by the Rowan-Salisbury school system early in 2014.

In December, 2014, Alexander took on the title of career development coordinator. He was assigned to South Rowan High and China Grove and Corriher-Lipe middle schools. Among his responsibilities was helping develop the new communications academy at South Rowan.

“Then one day I ran into Zach at Polar Express,” Alexander said. “We started talking, and I realized immediately that he was exactly the right person for the Academy.”

Thompson enjoyed teaching at A.L. Brown, but he eventually agreed to make the move to South Rowan.

“I know he agonized about it, but he came to South Rowan last March and started building things up, building up the relationship between the communications academy and local colleges and businesses. He was great at it.”

“It’s not just for South Rowan High School,” he said. “It’s for our whole community.”

Everything was going splendidly until the first day of school in August. The 35-year-old Thompson dealt with a migraine, but he soldiered through that day. It was the first day, after all, and he wasn’t going to be sidelined by a headache.

When he went to his doctor, the source of the migraine was discovered.

There was pressure on his brain. Glioblastoma. In everyday terms — a cancerous brain tumor.
Thompson underwent surgery on Aug. 31.

“They operated and removed all that they could,” Alexander said. “Then came chemotherapy and radiation.”

Thompson is a Sunday School teacher at Stallings Memorial Baptist and a devoted family man.
He’s married to another educator — Cassie Safrit Thompson — the former news anchorwoman who was the Rowan-Salisbury Teacher of the Year for 2014-15. She’s the reading design coach at Morgan Elementary School.

The Thompsons have twin boys — 3-year-olds Brooks and Parker — and there’s a baby on the way.

Alexander said Thompson has fought the disease with everything he has. After those draining treatments, he’s made it back to work — half-days, two days a week — but he’s been there for South’s students as much as possible.

So two schools will come together tonight in Granite Quarry, two old rivals who don’t like each other much on the field. But when it comes to the Thompsons, they’re all on the same side.

“I’ve been getting everyone on board I can think of, and all the proceeds we can raise will go to Zach and his family,” Alexander said. “Zach is fighting. We want to help give him more strength to fight on.”