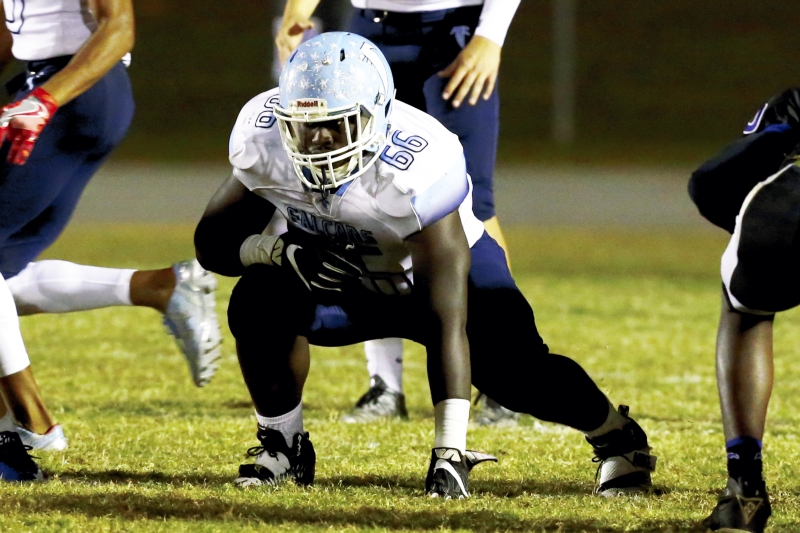 MOUNT ULLA — Entering this football season, West Rowan coach Joe Nixon knew he had proven game-breakers in seniors Kortez Weeks and Jovon Quarles, two of the most productive offensive players in school history.
The big question mark was the offensive line, and that’s not a question that’s frequently had to be asked in Mount Ulla.
Nixon himself was a standout offensive lineman at Catawba in his playing days, and the Falcons have a grand tradition of fierce, physical offensive linemen. There’s been a long train of huge, hungry guys who plowed holes and helped make stars of Ben Hampton, Joe Jackson, Wade Moore, Dinkin Miller, Daisean Reddick and Desmond Jackson and helped turn a stocky workhorse named K.P. Parks into a national record-breaker.
“We knew we had good skill guys, but we lost four o-line starters to graduation,” Nixon said. “We didn’t know if we’d be good enough upfront this year.”
There were gaping holes left behind by the departures of Jeremy Fortson, beefy Shrine Bowler Hezekiah Banks and next-level players K.J. Wilson and Shane Barber.
The lone returning starter is left guard Javon Lofton, an affable but powerful guy who also is the county shot put champ. Wearing spectacles off the field, Lofton doesn’t look menacing, but he’s a hard-nosed hammer on Friday nights.
“I’m a beast,” Lofton said with a grin. “I’m not as big as some of the linemen we’ve had, but o-line play is not about height and weight. It’s about technique, and we work hard on technique.”
Lofton (6 feet, 250 pounds) has been aided by senior Avery Allen (6 feet, 235 pounds). Allen, a former tight end, has made a successful transition to right tackle.
“A lot of the concepts for a tackle and a tight end are the same,” Nixon said. “We’re going from the spread now, we weren’t using a tight end much, and we wanted to get Avery on the field on every snap. He’s one of our best 11.”
Allen was stunned when Nixon pulled him aside at practice and informed him he was moving to tackle, but Nixon knew the Falcons had to make adjustments after they had minus rushing yards and were shut out by Davie County in Week 2.
“Coach said we needed to get stronger on the right side,” Allen said. “It surprised me that I was moving, but it’s all about getting those W’s and what’s best for the team. The transition hasn’t been hard. Pass-blocking responsibilities were the biggest change, but I’ve gotten pretty good at it.”
Together, Lofton and Allen have elevated an inexperienced group and brought them along.
And now the Falcons (8-2, 7-1 South Piedmont Conference) will be playing for a share of the league championship when they host Hickory Ridge (8-2, 6-2) on Friday.
“We knew Javon would give us a true anchor for the o-line,” Nixon said. “And Avery has shown a lot of character to change positions and play as well as he has. Both of them have big-game experience — they were in there in the third round of the state playoffs last year at South Point — and they’ve given us very valuable leadership.”
The younger Falcons have grown up as Lofton and Allen have led vocally and by example.
“We’re all brothers on the offensive line, and I’m proud of all of them and how much they’ve improved,” Lofton said “Coach Nixon works with us every day, and the young guys have learned not only what to do but how to do it. We started to click, and we’ve gotten better every week.”
The stat sheet says Lofton, Allen and their buddies are getting it done. West has the county’s best and most balanced offensive numbers. West is first in the county in passing and third in rushing.
The holes have been their for Quarles (1,263 rushing yards), who can pound for 6 yards consistently or go the distance if someone gets out of position. Allen made the block on the edge that allowed Quarles to steam 85 yards for a touchdown in last week’s 21-3 win at Cox Mill.
West’s sophomore quarterback Payne Stolsworth gets sacked about once a game and has been able to put up startling numbers (17 TDs, 2 picks). Stolsworth has thrown game-changing strikes to Armoni Hogue and Jalen Houston, but mostly he’s gotten the ball to Weeks, who is closing in on 1,000 receiving yards after moving from quarterback to wideout following the Davie disaster.
“As a line, we’re not big, but we’re pretty fast,” Allen said. “Pass-blocking is probably what we do best.”
The offensive line dines as a unit every Thursday night, a bonding experience that Lofton and Allen look forward to, as much for the camaraderie as the food.
They’ve ventured to a variety of restaurants, but Lofton cheerfully announced Hendrix Barbecue can expect this week’s visit. The Falcons dined on pizza before the Concord loss, so pizza probably is off the list.
Nixon is excited about Friday’s game with surging Hickory Ridge. The Ragin’ Bulls, who have an attacking defense and a big-play passing game, have won six in a row, and they’ll tie for second place in the SPC if they can beat West for the second year in a row.
“Hickory Ridge is very good and playing as well as anyone in our league right now,” Nixon said. “We’re excited about the challenge. It’s Senior Night, and we’re playing for a share of the league championship. To be in that position, that’s about all you can ask.”
West is in that position because its rebuilt offensive line has lived up to a proud tradition.