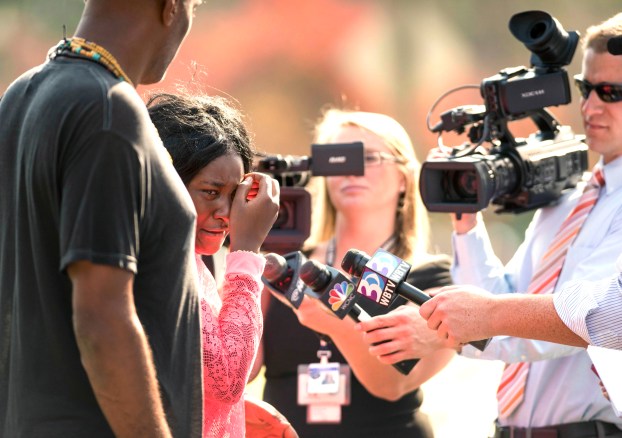 One man dead after firing at officers; officers fire back UPDATE: Police have identified the man who they say fired at officers this morning as Ferguson Claude Laurent Jr., 22. The officer who fired back at Laurent was Karl Boehm, a member of the Special Response Team. Boehm has been with the police department since 2008.

Police Chief Jerry Stokes said during an afternoon press conference that one shot was fired at two officers who entered a room inside the mobile home. Stokes said Boehm had been involved in a shooting in 2010 and following an investigation it was deemed a justified shooting. The officer has one disciplinary action on his record, which was a suspension related to a driving infraction.

Laurent’s family friend, Mya Miller, said the family is from the Virgin Islands. Miller said Laurent  had only lived in the area for about two years. Miller, who also lives in the neighborhood, said she heard about the incident from a cousin.

Miller walked to the scene in tears and even collapsed to the ground at one point. She said she didn’t understand what happened or why.

Laurent was known by the nickname Bigz. The shooting occurred at 9:25 a.m. at 625 of E Lafayette St., according to police. It started when police were attempting to serve a “no-knock” search warrant, according to a news release from police. A person inside the home fired at police and officers returned fire, the news release stated.

After being taken to a nearby hospital, the person died, police said.

Members of the Salisbury Police Department Special Response Team served the warrant because suspects in the home were known to be armed, the news release said. The special response team includes narcotic detectives.

The warrant was used to search for narcotics, weapons and stolen property.

Salisbury Fire Department medics, who are members of the Special Response Team, provided medical attention to the unnamed victim immediately following the shooting.

The Salisbury Police Department said more information will be made available.

The State Bureau of Investigation is leading the inquiry into the circumstances surrounding the shooting.

RELATED ARTICLE: Take a deep breath, and trust ourselves to be accountable

Candidates clash at school board forum

Editor’s note: This story has been updated to correctly state that, at a May 9 board meeting, Chuck Hughes voted against allowing... read more