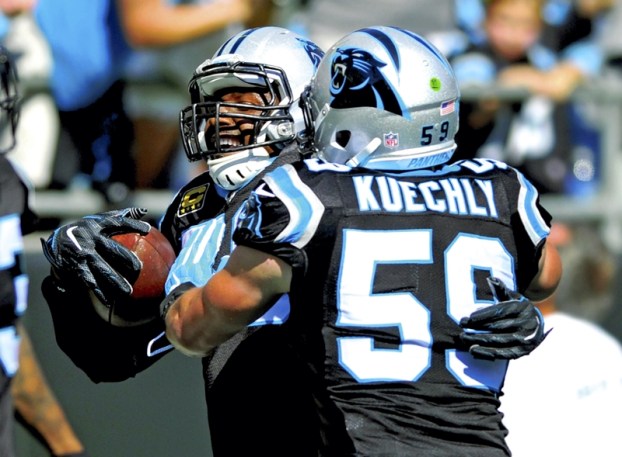 Carolina Panthers' Thomas Davis, back, celebrates with Luke Kuechly, front, after his fumble return for a touchdown against the Arizona Cardinals in the first quarter of an NFL football game in Charlotte, N.C., Sunday, Oct. 30, 2016. (AP Photo/Mike McCarn)

CHARLOTTE (AP) — The Carolina Panthers emerged from the bye week looking a little more like the team that went to the Super Bowl last season rather than an NFC doormat.

Jonathan Stewart ran for 95 yards and two touchdowns, Thomas Davis returned a fumble 46 yards for a score and the Panthers snapped a four-game losing streak with a 30-20 victory over the Arizona Cardinals on Sunday.

In a game reminiscent of last season’s NFC championship, a 49-15 Carolina victory, the Panthers jumped to a 24-0 lead and kept the pressure on Carson Palmer all day.

Carolina, which has struggled to generate a pass rush all season, sacked Palmer eight times — three of those by Star Lotulelei — and forced two turnovers. The Panthers also limited running back David Johnson to 24 yards rushing.

“That’s just everybody working together,” said Lotulelei, a 2013 first-round draft pick. “It’s the back seven doing their job covering, and the front getting after it. They gave us time to get there and that’s what we did up front.”

Panthers coach Ron Rivera said the win felt like a big weight was lifted from his shoulders.

“It is huge because it is one of those things we can build momentum off,” Rivera said.

Stewart added touchdown runs of 2 and 1 yards to push the lead to 21-0 against an Arizona defense that hadn’t allowed a touchdown in its previous two games.

“Our offense really struggled after that call,” Cardinals coach Bruce Arians said of the Davis fumble return. “We played much better in the second half and gave ourselves a chance. We just didn’t make the plays to get us back in the game.”

Forced into a one-dimensional game, Palmer finished 35 of 46 for 363 yards with three touchdowns, two to J.J. Nelson .

After losing their last two games on last-second field goals, the Panthers left no doubt about this one.

Carolina (2-5) needed a boost to save a sinking season and got one from Davis, their longest-tenured player and emotional leader, on the opening series. Lotulelei sacked Palmer, who attempted to push the ball forward to avoid the sack while in the grasp of the 315-pound defensive tackle. Davis picked up the loose ball and delivered a stiff arm on the way to the first touchdown of his 12-year NFL career.

“I think the guys really appreciate that because he works so hard,” Rivera said. “He is one of the players who is the heart and soul of the team.”

Palmer didn’t see it as a fumble.

“I was throwing to David (Johnson),” Palmer said. “It was an obvious pass, but they didn’t see it that way.”

The Cardinals (3-4-1) battled back within 30-20 and had the ball at the Carolina 36 with 3:18 left. But defensive end Kony Ealy tipped Palmer’s pass and intercepted it to help seal the Carolina win.

Panthers quarterback Cam Newton said the bye week helped the players get away from football and “we came back and meshed together.”

Newton on the run

Newton said last week he wasn’t afraid to run after being knocked out with a concussion against the Falcons on Oct. 2, and he proved it Sunday. Newton ran six times for 39 yards.

What Brown can
do for you

Arizona wide receiver John Brown, who missed last week’s game against Seattle because of leg issues related to a sickle-cell trait, caught a 17-yard touchdown pass from Palmer in the third quarter.

Nickel cornerback Leonard Johnson gave the Carolina defense a big boost in his first game. Johnson, activated from the non-football injury list last week, had eight tackles, one sack and a pass breakup.

Cardinals: Safety Tyrann Mathieu left in the first half with a shoulder injury and did not return. Left tackle Jared Veldheer departed in the fourth quarter with an arm injury.

The Panthers travel to Los Angeles next Sunday. The Cardinals have a bye.