Gotta Run: On the road again 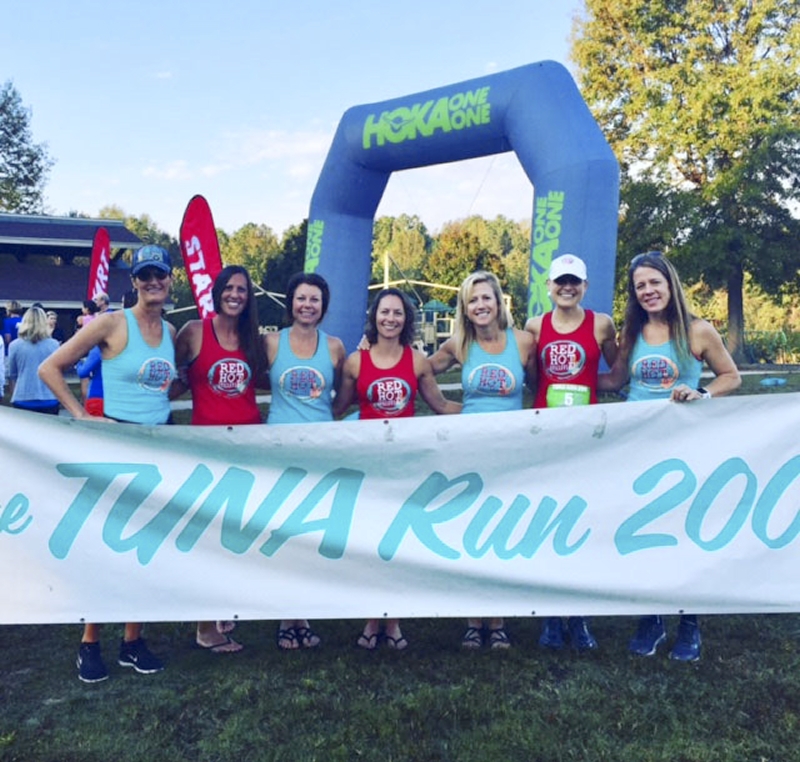 Back in 2010, a group of local women decided to run the Blue Ridge Relay covering a total distance of 200 miles. From that beginning, a special women’s running group sprang to life with the unlikely name of the Red Hot Mamas. Leader of the group has been Salisbury’s Meredith Abramson with a solid assist from her friend, Emily Brinskelle. The Red Hot Mamas kept at the Blue Ridge Relay through 2014 but recently completed their second time around with another long distance relay called the Tuna Run 200.

While the team members all originally were from Rowan County, some of the 50 women who have competed for the Red Hot Mamas over the years have come from other areas. But still, Abramson looks for local women to fill the core of the team. She jokes, “We have thought about taking the concept nationwide, Red Hot Mama Nation does have a good ring to it!”

The Tuna Run is an overnight relay journey that goes from Raleigh to Atlantic Beach. Participant teams of 4-12 members split 36 legs of varying distance. This year’s event was held Oct. 21-22 and was shortened to 181 miles due to remaining issues from Hurricane Matthew. After retiring from the Blue Ridge Relay following a DNF (did not finish) in 2014, the Red Hot Mamas took on the challenge of the Tuna Run last year and won the overall ultra division, and they wanted to go back and defend the title.

Abramson assembled the group of regular runners into two teams, one team of six for the ultra team that would run longer legs while competing separately and the other team running less distance individually but requiring more coordination of logistics.

“Running ability is really less important when we look at the criteria to be a (Red Hot Mama). We really love fun and flexible females, those who support and root each other on and truly understand what it means to be part of a team in a sport that is individually competitive,” Abramson said. “All runners don’t excel at this, but I am proud to say that the (Red Hot Mamas) are comprised of runners who epitomize the ability to find the power of team spirit within.”

“Running in the middle of the night isn’t our favorite, especially when we don’t know the area and we hear dogs barking in the distance,” she said. “But hands-down, the most difficult part about these all-nighters is the lack of sleep while pushing our bodies to do big mileage.”

Other than fueling their competitive nature, I asked Abramson what she thought made the Mamas special. She said, “We are clearly about supporting others out on the race course.

“We cheer, paint vans, ring cowbells and make spirit tunnels for athletes to run through. We offer support, give high fives, share our blinkie lights and make our presence known in a super-positive way. It’s what we do and people notice. When we ran as a group down the boardwalk to the finish, we felt the love being returned from others that we had supported along the way.”

These girls can run well as exemplified by their finish times. The six person ultra team completed 181 miles in 26 hours, 43 minutes and 59 seconds, an average of 8 minutes and 46 seconds per mile. Members of that team included Abramson, Angie Cooke from Concord, and Emily Brinskelle, Jenn Curtin, Kelly Vanzile and Stacy Benevides, all of Burlington. Sarah Busby of Salisbury was the primary driver and cycling companion. This group took first place in the all-female ultra category and an overall 30th place finish out of 96 total teams.

Rowan women dominated the regular team of 10 who finished right behind the ultra team. Patricia Hedenskog, Audra Perry, Ashlynn Trexler, Lori Yang, Danielle Jones and Pam Roseman, all from Rowan, joined with Jenny Drabik and Kathy Manning of Cleveland, Ohio, Karen Olevic from Pittsburgh, Pennsylvania, and Jennifer Griggs of Lexington for a strong showing. This team finished in 34th place.

As a final thought, Abramson volunteered the Red Hot Mamas for a mission trip to help out in one of the communities ravaged by the flooding.

“These communities do a lot to support the Tuna Run,” she said. “They open the doors of their schools and churches, they feed us and they root us on.”

Upcoming 5K races include the Spooky Sprint 5K at Catawba College this afternoon, the Bostian Elementary 5K at the school Saturday, Nov. 5, and the Share the Care 5K starting and finishing at the Hospice offices. These events are open to walkers and have a half-mile fun run for kids. There is plenty of information on these races and more at www.salisburyrowanrunners.org

Back with thoughts on running for punishment next week. See you then!