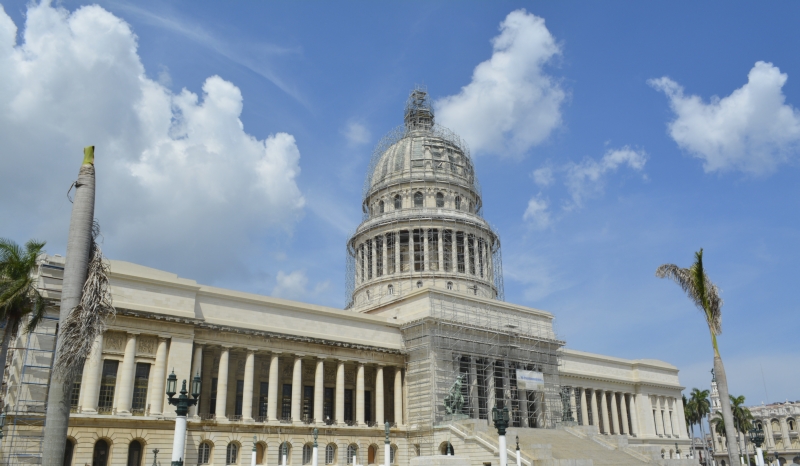 The city’s capital building is modeled on the Capitol Building in Washington, D.C., and ironically, is also under renovation. Susan Shinn/For the Salisbury Post

In September, I was lucky to be included on a trip to Cuba with N.C. Baptists on Mission. My cousin, Tom Beam, led the trip, and we spent our free day in Havana.

Since we were there less than 24 hours, we were determined to make the most of our time in the capital city. Well, I know I was.

Havana is by far Cuba’s largest city, with some 2.1 million people. Yet as we drove into the city, I noticed very little traffic. That’s because there are so few people who own cars. I’ve seen more traffic on Interstate 85. So that was a pleasant initial introduction to the city.

Our first stop in Havana was at a private restaurant across the street from the capital building. As we had been headquartered at a camp for most of the week, I loved the white tablecloths, uniform waiters and — ah yes — the air conditioning!

We spent a leisurely two hours eating and visiting with one another. After traveling for a week together, we had become good friends. The most expensive item on the menu was filet mignon for $12, so we ate well.

We’d arrived on a beautiful summer day. The sun was shining and the humidity seemed lower than it had been the past several days. Two hours later, we emerged from the restaurant into a downpour! No matter. We walked along underneath the buildings’ wide porticos and stayed relatively dry. By the time we reached the end of the block, the rain stopped.

As I said, we were across the street from the capital building, so we took a few minutes to look it over and take pictures. The capital is a replica of our Capitol in Washington, D.C., but Tom told us it was 2 feet higher. Ironically, it was covered in scaffolding, just like our Capitol building had been recently.

My friend David and I decided we wanted to take a selfie in front of the building, but forgot we were standing in the middle of a side street, and were nearly run over by an oncoming bus. Selfie caption: “That moment before things go terribly wrong.”

Emerging unscathed, we found ourselves with the rest of our group in front of a long line of convertibles. Each day, owners of these classic cars park them in a row across from the capital building. As soon as the rain stopped, these guys dashed out into the street, cloths in hand, furiously rubbing the raindrops away from the pristine finishes.

We saw 1950s models of vehicles including Fords, Cadillacs, Chevrolets, Buicks and Pontiacs. We even saw an Edsel and a DeSoto during our jaunt around the city. It was fascinating, like stepping back in time, really, and the older gentlemen in our group seemed especially enchanted.

After we all took plenty of photographs, it was back on the van for more sightseeing.

From downtown, we visited an indoor market. Given the recent showers, it was quite sticky and steamy inside, so I didn’t stay long. I did, however, want to buy some art, so Tom walked around with me to help me pick something out, and then to help me barter.

Bartering is evidently expected in the booths. Before long — and because it was so stifling — I’d chosen a lovely painting of the Malycon, the wide, promenade area beside the water. The land curves and creates a delightful scene. Tom took only a few minutes to get the price down, and, when it was clear they’d go no lower, we bought it. A few stalls down, I’d seen another wild, horizontal-shaped painting of six dancing Cuban women, maracas in hand. This artist had painted dark-skinned women in bright costumes — red, blue, purple, orange, green — on a bright, yellow background. It was completely unexpected and I loved it. The woman in the booth immediately started lowering the price before I even asked, so I ended up getting two paintings for the budget I’d set for one.

I also bought two 8×10 images of Che Guevera and Marilyn Monroe, printed atop columns of type from a Spanish magazine. Couldn’t resist.

Others continued to shop, but my friend Jim and I waited outside, where it was only slightly cooler, but there was at least a slight breeze. I killed time by taking photographs of a Catholic church, Iglesia de Paula, across the street. A plaque designating it a national monument said it was completed in 1735.

After everyone had found their treasures, we loaded up the vans for a quick drive to the fortress overlooking the city. Built in 1589, Morro Castle stands at the entrance to Havana’s bay. Unfortunately, the showers had started again, so our late-afternoon view was not the best, and we didn’t stay long. I did notice there were no railings, so I was quite careful when taking our group’s photo.

By now, we were ready to go to our hotel, so we took the vans down a wide boulevard, passing numerous embassies along the way. The Russian Embassy, looking like something out of Star Wars, immediately caught my eye. If its architects intended it to be foreboding, they certainly succeeded. I found out later that the locals call it “la espada de Rusia” — the Russian sword. I’d concur.

We had the rest of the afternoon to relax at our hotel, the Sheraton Four Seasons atop a hill overlooking Embassy Row. My room overlooked a fabulous pool, and yes, I did go swimming. You should always pack a swimsuit, because you never know when you’ll need one.

We drove back into town for yet another wonderful meal at a private restaurant, then returned to the hotel before terribly late. David, Jim and I sat out on the porch until midnight — the heat and humidity had finally backed off — savoring the last hours of our time in Havana.

It was a terrific visit to Cuba, but Tom definitely saved the best stop — Havana — for last.