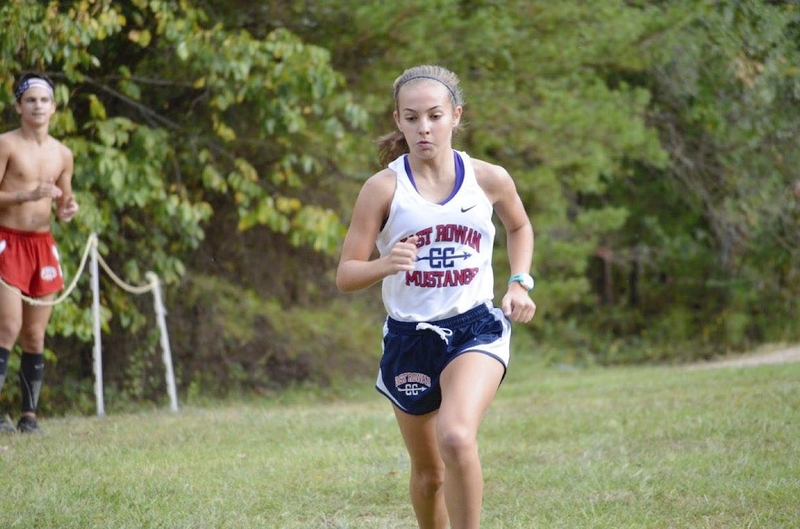 The popular Spooky Sprint 5K is coming up next week with its costume contests and plenty of good competition. Just last year, one of the county’s young runners established herself as worth watching by taking the overall female win as an eighth-grader. Then this year, Adalie Harrison did it again by winning the pre-county cross country female title as a freshman at East Rowan High.

Adalie ranks those two wins as her best running memories so far. Others include a second place finish at McAlpine Greenway Park in Charlotte during the Providence Invitational, running a race during Hurricane Matthew just a couple of weeks ago in Greensboro and completing nine miles in just one hour at East’s Run-a-thon.

I remember having a conversation with Adalie just before last year’s Winter Flight 8K about the time she hoped to run on that day. It was clear to me that she has a plan, knows what she is doing and has a huge future in the sport.

“I go out hard and just try to do the best I can and sometimes I surprise myself with how well I do,” she said.

At the recent county meet, Adalie ran on a sprained ankle suffered when she tripped over a tree root at a previous race, but still pushed hard to lead through the first half of the race.

“I want to get the ankle better, get in the 19’s and go to the regionals and the states,” she said.

When asked about a favorite athlete, Adalie said, “I don’t really have a favorite athlete but I look up to those that have succeeded in life and tell me their stories. There have been lots of people who have helped me, including Kim Miller, Audra Perry and coaches Kim Caldwell, Star Forney, Jon Heidrick, Rick Roseman, Billy Mills and Kevin and Ester Marsh.”

It was Miller who got Adalie running in the first place when they discussed it during the fifth grade at Shive Elementary. Next came Girls on the Run with Perry in the sixth grade. By then, Adalie was hooked. She’s competitive by nature and is an avid basketball player as well.

Adalie wants to go to college on a running or basketball scholarship, continue to get faster and stay healthy.

When I asked Adalie about her favorite subjects in school, she quickly replied, “Lunch and gym! Just kidding, my favorite subject is science.” Adalie also likes to draw, spend time with family and friends and participate in church activities. Her family includes mom and dad, Angie and Terry, and sister Hollie.

The conference meet didn’t turn out the way Adalie had hoped. She led more than 60 girls for the first mile but faded after the ankle again became troublesome over the hillier parts of the course. A visit to Ortho Carolina sealed the deal that Adalie had to focus on healing the ankle before those competitive goals could be realized. With that, she is now under the care of Delaine Fowler at Fowler Physical Therapy. Delaine knows a thing or two about running and racing and plenty about treating injuries. In fact, she covers that topic during all of my beginning runners classes.

Adalie ran her South Piedmont Conference race on Tuesday afternoon, met for the first time with Delaine on Wednesday and will run her regional meet on Saturday, Oct. 29. I will let you know what happens.

There are plenty of races coming up. On Oct. 29 is the St. Matthew’s Church 5K that benefits two church members and their medical expenses. Then, Sunday has the Rowan Rotary’s Spooky Sprint 5K at Catawba College. The Rotary’s programs will get the proceeds. Both these races have Halloween costume contests.

The Bostian Elementary School 5K is Saturday, Nov. 5, benefitting PTA projects. Saturday, Nov. 12 is the Share the Care 5K that benefits Rowan Hospice. All of these 5Ks also are accompanied by a half-mile fun run. Look for more details at www.salisburyrowanrunners.org

Take advantage of the great weather and keep moving, whether walking or running. All of these events are open to both. See you next week!