Prep Football: Cavaliers win a big one over East Davidson 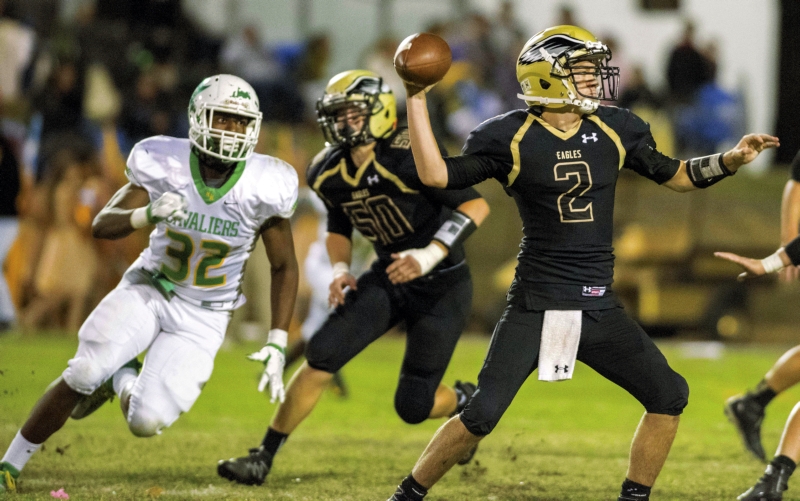 THOMASVILLE – North Rowan overcame a halftime deficit and took command of the race in the Central Carolina Conference with a 14-13 win at East Davidson.
North (7-2, 3-0 CCC) has lost only one CCC game in the last four years, while winning 17.
But this was a scrap.
“East Davidson is legit, a very solid football team, good at what they do,” North Rowan coach Ben Hampton said. “But our defense was lights-out in the second half, and we found a way to overcome penalties and mistakes and won the football game.”
East Davidson was overwhelmed, 58-0 by North Rowan in 2015, but the Golden Eagles (7-2, 2-1 CCC) are much-improved and they desperately wanted a breakthrough win on their homecoming.
East Davidson’s only previous loss this season was to 3A Ledford, while North’s losses are to 4A Davie County and 3A South Iredell.
“This was a very big win,” Hampton said. “It does put us in the driver’s seat in the CCC, but we’ve still got games left against two very scary teams (Thomasville and Salisbury).”
The Cavaliers scored first on a 15-yard pass from Corbin Smith to De’Andre Gray with 8:03 to play in the opening quarter.
“They were committing seven men to the box, and we were having a hard time getting the running game going in the first half, Hampton said. “We were trying to find ourselves offensively for a while. Fortunately, Corbin had a very good game. He made good reads and threw good balls.”
East Davidson’s Brandon Perrell had a 27-yard TD reception from Nick Tobin six minutes later to answer North’s score and tie the game at 7-all.
Then Tobin tossed a TD pass to Eli Jacobs with 6:26 left to play in the second quarter, but the extra point was missed. East Davidson took a 13-7 lead to halftime.
Early in the second half, Jayden Jones broke a 74-yard TD for the Cavaliers, and Jacob Young’s PAT gave North a 14-13 lead.
“We made good adjustments at halftime and started running the ball better,” Hampton said.
North had a chance to extend its lead in the third quarter, but receiver Alonzo Sirleaf fumbled the ball trying to add to a 17-yard pass play.
North Rowan went for it on fourth-and-2 from the Golden Eagles’ 23-yard line in the fourth quarter, but a pass fell incomplete.
North had yet another chance to extend its lead but missed a 33-yard field goal with seven minutes left.
But Smith and Sirleaf made some plays down the stretch, and North’s defense stood firm.
“It was a good win,” Hampton said. “Our kids had to fight for it. East Davidson came out and hit us in the mouth in that first half.”
•••
Thomasville Times staff writer Daniel Kennedy contributed to this story.