Cubs again one win away from World Series 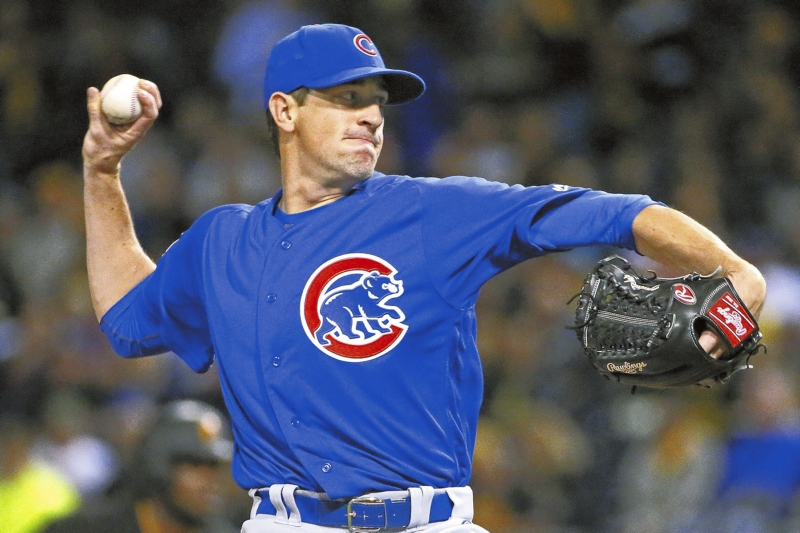 FILE - In this Sept. 26, 2016, file photo, Chicago Cubs starting pitcher Kyle Hendricks delivers during the first inning of a baseball game against the Pittsburgh Pirates, in Pittsburgh. The Chicago Cubs return home just one win shy of their first World Series appearance in 71 years, and they will have two chances to lock it up, leading the Los Angeles Dodgers 3-2 in the NLCS. The Cubs will send major league ERA champion Kyle Hendricks to the mound on Saturday against Dodgers ace Clayton Kershaw. (AP Photo/Gene J. Puskar, File)

CHICAGO (TNS) — The Cubs had just seized command of the National League Championship Series, just one win away from the World Series. In the clubhouse after Thursday’s 8-4 win over the Dodgers, first baseman Anthony Rizzo was talking about the atmosphere he expects at Wrigley Field for Game 6 Saturday.

But as Rizzo began, a loud noise emanated from another scrum a few lockers down, where veteran catcher David Ross was holding court.

“It’s like Rossi said with Ric Flair,” Rizzo said, turning his thoughts to the challenge now facing the Cubs. “To be the best, you’ve got to beat the best. It’s no different.”

For the Cubs, that means beating the great Clayton Kershaw, who the Dodgers have entrusted to keep their season alive for one more day. Kershaw tossed seven shutout innings in Game 2 on short rest. This time, he takes the mound with extra rest, a rare luxury in a postseason in which the Dodgers have leaned hard upon their ace. But the Cubs hope that seeing Kershaw twice in a row is an advantage.

“It’s easier to kind of replay those mental notes and learn from it,” Cubs third baseman Kris Bryant said. “We’re certainly going to do that.”

By taking two of three in Los Angeles, the 103-win Cubs have given themselves leeway. The best team in baseball will have two cracks to win one game.

“Obviously, it feels good,” Cubs manager Joe Maddon said. “You’d much rather go home under those circumstances than any other, and you want to get it done as quickly as possible. It’s going to be a formidable event.”

As an added bonus, the Cubs will get their two shots at home, before their own tortured fan base hoping for the franchise’s first World Series championship since 1908.

“We know the fans are having a good time and rightfully so,” Bryant said. “We believe in ourselves and we know that they believe in us. So, we expect them to be loud and there.”

For only the third time since winning their last pennant in 1945, the Cubs need just one more win to play in the World Series. Of course, the last two times they were in that position, their dream seasons ended with a spritz of water to the face, and the team again became punchlines.

In 1984, back when the League Championship Series was just a best-of-five, the Cubs took the first two games against the Padres in Chicago. But when the series shifted to San Diego the Cubs didn’t win again. Game 5 turned in the Padres’ favor when Cubs first baseman Leon Durham let a routine grounder bounce through his legs.

In 2003, with Cubs up 3-2 against the Marlins, a fan named Steve Bartman made two fateful decisions that shook a whole franchise. He bought tickets down the left-field line at Wrigley Field for Game 6 and reached over the fence trying to catch a foul ball that would have landed safely in the glove of Moises Alou. Given an extra out, the Marlins blew the game open and eventually won the series. The loss came after the Cubs led the series 3-1.

Since the start of the so-called Curse of the Billy Goat during the 1945 World Series — a loss to the Tigers — the Cubs have played six games in which they are just one victory away from the National League pennant. They are 0-6, not that these Cubs are counting.

“For starters, I don’t think any of us are 71 years old,” center fielder Dexter Fowler said, referring to the curse. “We weren’t alive then. So, we’ve heard the history. But at the same time, we’re trying to make history here.”