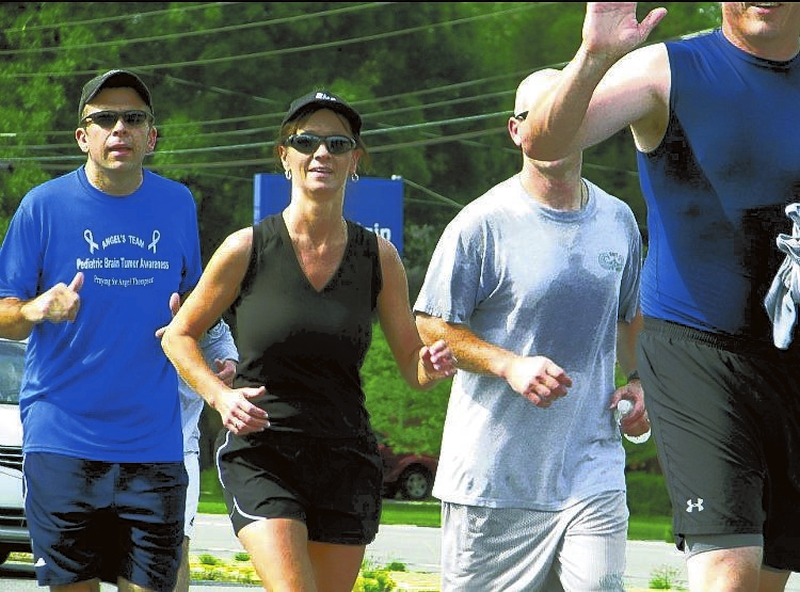 Submitted photo Lorrie Hampton of Kannapolis runs in an event supporting Special Olympics about five years ago. Hampton, who is the stroke support group coordinator for Carolinas Healthcare System NorthEast, will be running in the New York City Marathon Nov. 6 as part of a team of runners representing the National Stroke Association.

CONCORD — On Nov. 6, the day of the New York City Marathon, Lorrie Hampton of Kannapolis will hop on the Staten Island Ferry about 5:45 a.m. and head toward the runners’ village.

Because the marathon has upwards of 50,000 runners, they will be taking off from the western end of the Verrazano-Narrows Bridge in waves. Hampton’s start time won’t be until 11 a.m., two hours after the top runners hear the gun.

As she runs well into the afternoon, Hampton will pass through all five boroughs of New York City. There will be large crowds and 130 bands along the route, and her 26.2-mile journey will finish in Central Park.

Back in Concord, Jon Loeb hopes to be following Hampton’s progress through a tracking device she’ll be wearing on her race-day bib. Since its second meeting in 2014, Loeb has been part of the stroke support group Hampton leads for Carolinas Healthcare System NorthEast.

“Lorrie has lots of different visitors speak,” adds Loeb, who suffered a devastating stroke May 31, 2011, when he was just 51. “We learn a lot, and Lorrie makes everybody feel so welcome and special.”

Loeb likes to talk and share his experiences with other stroke victims. He asks questions and seeks opinions of stroke navigators, who are nurses.

“I get to meet a lot of other people who have the same problems I have,” Loeb says.

Hampton schedules picnics and Christmas parties for the group, and in recent years she has organized a 5k race in Kannapolis — Strides for Stroke.

This year, the race had close to 300 runners cross the finish line.

At the end of those races, stroke victims walk or jog a “Survivors’ Lap,” often joined by their therapists and caregivers.

Loeb, who still depends a lot on a wheelchair, pushes himself to walk across the finish line with a cane and a brace on his left leg. It’s a victory for him and other stroke victims, just as completing the New York City Marathon will be for Hampton.

In the marathon, Hampton will be among about 15 runners from across the country who have been chosen to represent the National Stroke Association Challenge Team, which is raising money and bringing awareness to strokes and the people recovering from them.

Sue Ashcraft, a clinical nurse specialist at NorthEast, encouraged Hampton to apply for the NSA Challenge Team, knowing Lorrie was an experienced runner. As she approached her 50th birthday, Hampton had run her first marathon in Myrtle Beach and swore then it would be her first and last.

But Hampton realized the New York City Marathon could possibly combine her two passions: running and stroke patients. When her application for the challenge team was accepted by the NSA, Hampton automatically committed to raising $3,500, and she was the first to reach that goal.

“That was not a problem,” she says. “… With this (support) group, family and friends, it happened pretty quick.”

Hampton is a medical assistant and emergency medical technician-intermediate who has been part of the hospital’s inpatient stroke team for about 10 years. She also works on the events medical staff.

Hampton started the stroke support group about two-and-a-half years ago, and it’s thought to be the largest of its kind in the state. The support group meets monthly at Carolina Rehab NorthEast near the main medical center.

Hampton tries to bring in different speakers, such as neurologists, physical therapists, nurses and pharmacists. She says the group is important for both stroke victims and their caregivers.

Close to 40 people sometimes attend the monthly meetings. Loeb, an engineer by training, had to relearn how to talk, swallow and eat after his stroke, which dramatically affected his left side.

Part of his rehabilitation included 10 weeks at Trinity Oaks in Salisbury, where he received electrical stimulation  in his neck and face to help his muscles recover so they could work to drink, swallow and talk again.

Things have come slow. Loeb is able to raise his left arm somewhat. His left field of vision is not good, and overall he still fights with left-side weakness. An ankle-foot orthotic device prevents his ankle from twisting and possibly breaking his bone.

Jon’s wife, Lisa, drives them to shopping, church and doctor appointments. Jon says he’s envious — but happy — for stroke friends who are already back to driving.

Hampton, 51, says she’ll be thinking a lot about Jon and other members of the stroke support group during her marathon run.

She has been running seriously for about 10 years. Hampton much prefers 5ks, 1oks and half marathons. For the much longer marathon, she has been following a 20-week program of training, and Hampton is close to her peak week of 54 miles before she tapers down toward Nov. 6.

Her longest preparatory run has been 21 miles. She hits the pavement four to five times a week, and one of those runs, usually on the weekend, is long distance. This past Saturday, she covered 16 miles; the Saturday before that, 20.

Hampton recently competed a half marathon with her niece, her primary training partner. But after she crossed the finish line of the 13.1-mile race, Hampton kept running because she had to log more miles that day, according to her schedule.

On Saturday mornings of her long distance run, Hampton often has been out the door by 4:30. She always runs with someone, and her Kannapolis route often takes her downtown, on the greenway and through the North Carolina Research Campus.

This summer, Hampton acknowledges, the heat really took a toll.

Hampton says she has always been a pretty healthy eater, and she hasn’t changed her diet much, although she expects to load up on good carbohydrates the week leading into the marathon.

The Saturday night before the race, the NSA Challenge Team will be having a dinner in Manhattan.

Ashcraft will be traveling with Hampton, along with Lorrie’s husband, David, and possibly her mother and niece. David is not a runner — “not unless something is after him,” Lorrie says.

The New York City Marathon is in its 46th year.

“I am so ready for this marathon,” Lorrie says. “… I’m very excited, and I have a lot of faith in God that he will carry me through it.”

Loeb and the rest of the stroke support group will be back in Concord cheering her on.