Commissioner candidates square off in Chamber of Commerce forum 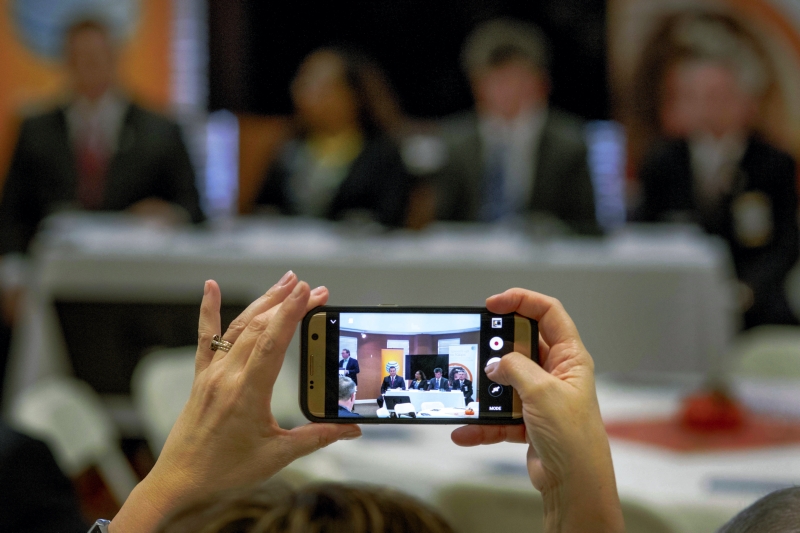 SALISBURY — When Rowan voters cast ballots in the 2016 county commissioners race, they should liken it to flying in a plane, says Commissioner Craig Pierce.

Pierce, who is running for a second term, used the analogy during a county commissioners forum at a Chamber of Commerce breakfast event on Thursday. He was joined at the forum by all three other candidates for county commissioner — Republican incumbent Mike Caskey, Democratic challenger Veleria Levy and Libertarian challenger Mark Lyerly.

On Nov. 8, voters in Rowan will choose two of the four to serve a four-year term on the board of commissioners.

Starting the analogy, Pierce asked the crowd of people to imagine Pierce was flying a plane with Rowan County as a passenger. Pierce said he’s spent his first term in office learning how the fly the plane and take Rowan County where it needs to go. By challenging incumbents, Pierce said Levy and Lyerly were hoping to “throw the pilot out.”

“We’ve not ever been on a county board, so we don’t know how to fly the plane,” Pierce said, referencing Levy and Lyerly. “We don’t go to county commission meetings so we don’t know what the cockpit looks like, but we want to throw the two people that’s been there and done that out the door and try to fly the plane. I’m like, fine, give me my parachute and I’ll watch it crash.”

No elected official ever entered office and immediately knew everything, Lyerly said.

“I don’t know everything but, with time and research, I hope to be able to make an informed decision about the issues facing Rowan County,” he said. “Everybody had to learn. Nobody walked into this and said look, this is what I want things to be. If we work together, we can accomplish much.”

Levy was next in line of candidates to give a closing statement, saying she was excited to be running for office.

Caskey’s closing statement didn’t address Pierce’s analogy. Instead he lightened the mood, joking that he was able to stay awake for the entire forum, which started at 7:30 a.m. He then made an analogy of his own, saying that in the previous four years commissioners have “turned the ship around.”

“I’ve said it couple times, but the county is like a giant ship and it takes a while to get it turned in the right direction,” he said. “Because of the economy, there were some cuts that had to be made to survive. We’ve tried to reverse those the best we could.”

Caskey asked for the vote of attendees to “keep the momentum that we’ve got.”

Candidates answered a range of other questions during the forum. On most questions, candidates seemed to agree or didn’t offer answers that were significantly different than others.

The goal of commissioners’ water and sewer system has been described as providing residential services where it’s feasible and requested. The main point however, is to attract businesses along the Interstate 85 corridor.

Expectedly, Pierce said he supported the water and sewer system. It’s his idea. Pierce said the county doesn’t have any plans to build its own treatment plant. Instead, the county will become a customer of Salisbury-Rowan Utilities.

Caskey was next. He said he supports the county’s ongoing water and sewer system efforts. Caskey also said he’s unsure whether the county would need to ever build its own facilities, like a treatment plant or intake on the Yadkin River.

Similar to incumbents, Levy also said she agrees with the water and sewer system efforts. She added that Rowan County can do better. She accused incumbent commissioners of saying no to opportunities that would have allowed the county to expand. However, she didn’t specify what the opportunities were.

Lyerly was the final person to answer the question, rounding off the polite, unanimous agreement. He said a water and sewer system would be beneficial because it could lower taxes imposed by volunteer fire departments without easy access to municipal water.

Candidates’ answers differed when asked what most underutilized county asset could be utilized to bring jobs.

Caskey started off and listed the public school system. He said county commissioners need to continue working with public schools to provide for their needs.

“It’s really the hallmark of our society,” he said. “The thing that’s always set us apart from other countries is our education system.”

“We’ve got nothing here for our kids to do,” she said.

The West End Plaza should be a site for a Boys and Girls Club or a business incubator, she said.

Lyerly, in part, agreed with Caskey and Levy. In his brief answer, he also listed the N.C. Research Campus in Cabarrus County and the two breweries that have opened in downtown Salisbury.

Thursday’s forum isn’t the last one for county commissioners. The next scheduled forum will be held by the Rowan County Council on Aging and AARP Chapter 4314.

The forum will be Oct. 27 at 2 p.m. in the Rufty Holmes Senior Center. All four candidates are scheduled to attend.