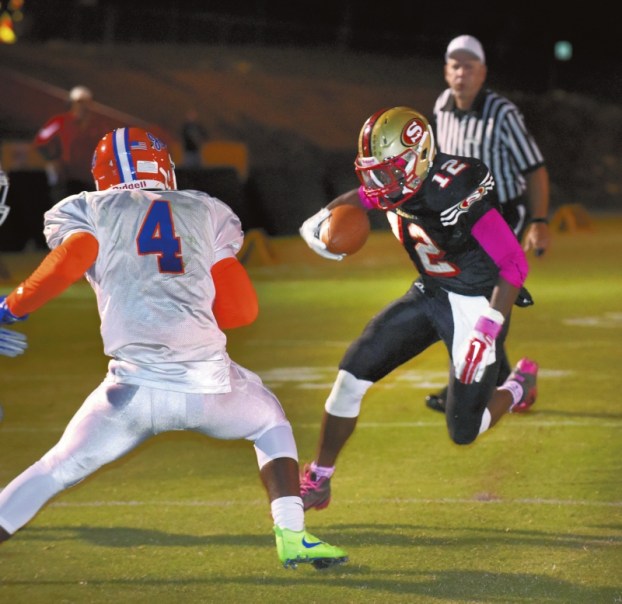 SALISBURY — High school football is all about the spread offense now, but the Salisbury Hornets traveled back in time Friday at historic Ludwig Stadium and won a ballgame with an old-fashioned style.
A full-house backfield. Two tight ends. Here we come. Stop us if you can.
“Smashmouth” used to be the operative coach-speak for that approach. You don’t hear it much anymore, but Salisbury’s left halfback Cameron Horne did some serious smashing in Friday’s 20-10 Central Carolina Conference win against Lexington.
“You don’t think a night like that is ever going to happen,” Horne said with a smile. “But it happened.”
Horne entered Friday’s game with 23 carries, 120 yards and zero touchdowns for a talented but sputtering offense that was still trying to figure out its identity.
Against Lexington, Horne carried 24 times for 128 yards — doubling his season rushing stats in one outing. And he made two trips to the end zone.
“I knew I hadn’t scored a touchdown all year,” Horne said. “Not that I was complaining about it.”
Horne passes the eye test. At 5-foot-10, he’s 175 pounds of carved muscle. He’s also athletic enough that he placed third in both hurdling events in last spring’s Rowan County Track and Field Championships.
“He can run with power and he can run with speed,” Salisbury coach Ryan Crowder said. “He’s played some on defense (at linebacker), but we’ve always felt like he was a better offensive player.”
Horne showed he was a capable offensive player on Friday, spearheading the most significant win of the week by a Rowan County team. The victory halted Salisbury’s five-game losing skid and kept the Hornets afloat in the CCC race.
As Crowder examined film of Lexington, he saw a team with similar talent, but he was convinced the Hornets had more physical players.
“Lexington has a lot of speed,” Crowder said. “They like to knock down passes and they like to get good angles with their speed and run you out of bounds. So the gameplan was to run right at them, and we stressed to our guys that we had to be the more physical team.”
It was a gameplan tailor-made for Horne. The Hornets got a big game from their offensive line and a lot of tough blocks from tight end Jaylen McDowell. QB Tyquan Jones had zero passing yards, but he also had zero turnovers and managed the game. Jones was given options about the direction the plays would go, and he almost always picked the right side. Fullback Marcus Corry didn’t get many carries, but he was rugged as a blocker. And the halfbacks, Horne and Trell Baker, blocked hard for each other.
Horne had two first-half TDs as the Hornets took a 14-3 lead.
And then they maintained command in the second half with ball control.
“Everyone blocked great, and I also was able to break tackles by always keeping my feet moving,” Horne said. “Lexington guys tried to grab my legs, but I ran through some tackles.”
Salisbury operated from the shotgun for one series, just to show Lexington something different, and Baker broke a 30-yard run on a shotgun play, but for the rest of the night the Hornets used sheer power. They basically ran two plays over and over — “iso” and “reach.”
“Our coaches were saying we can run this play and this play will work, and it was good to know we had those other things in our back pocket,” Crowder said. “But we did such a good job of executing that we never had to do anything else, and fewer things can go wrong when your quarterback is under center, than when he’s in the shotgun. Until they stopped us, we were going to keep doing what we were doing. Horne was running hard and Baker was running hard, and we just kept hammering away.”
Keep it simple. Don’t turn it over. Don’t beat yourself with penalties. It worked.
The Hornets ran a play, with Baker carrying, on which Horne pancaked a defensive back. It looked unfair — like Chuck Norris against the Karate Kid.
On his HUDL highlights, that play drew Horne’s biggest reaction. He punched the air and applauded. He was more excited about that block than his touchdowns.
“Blocking is No. 1,” Horne said.
While Horne said he is filled with “Hornet Pride,” he has many connections to North Rowan. He said his uncles include Mark Sturgis, a sensational running back for the Cavaliers in the 1970s, and Robert Steele, a Hall of Fame track and football coach at North Rowan.
Horne was a jayvee running back for the Hornets as a freshman.
He moved up to the varsity as a sophomore and got spot duty as a running back. He ran 31 times for 109 yards and two TDs.
Horne said he transferred to Charlotte’s Garinger High prior to his junior year, but he moved back to Salisbury during the season. The Hornets had Antwond Glenn as their primary running back, so Horne played linebacker.
“Charlotte football was eye-opening,” Horne said. “Guys are really serious, and it’s football all the time. When you see teams like Mallard Creek, you learn things. There was adversity that year, but I came through it.”
As a senior, Horne is trying to make the most of the time he has left playing high school football. He relished Friday’s breakout performance.
“I’ll stay humble because this week, it probably will be someone else’s time to have that big night,” Horne said. “As long as we win, I’ll be fine with it.”