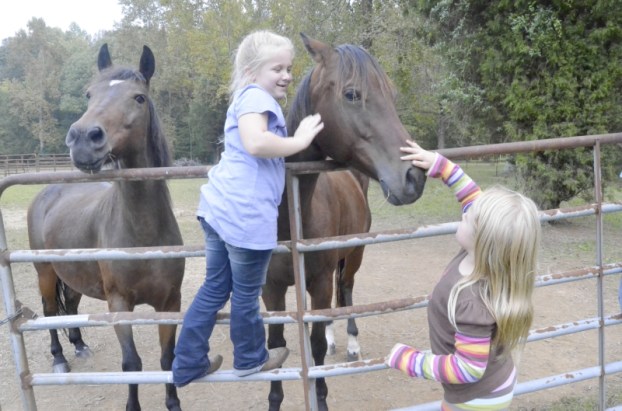 Whitney Drye, left, and Lillie Martin cozy up to a pair of horses at Midnight's Promise equine rescue in Salisbury. The rescue held a recent fundraiser and campfire dinner to thank volunteers and donors. Shavonne Walker/Salisbury Post

SALISBURY — Deborah Baker had made a promise to her rescue mare, Midnight Sun, that she would always be cared for and protected. It’s a promise Baker has kept. She expanded that promise and along with four other horse rescuing friends formed the nonprofit horse rescue — Midnight’s Promise.

The organization celebrated its first anniversary with a weekend campfire gathering and fundraising dinner. Since its October 2015 inception, the nonprofit has formed a board of directors, gotten volunteers and are leasing property from Salisbury residents Robin and Rick Perry.

The partnership came by accident after the Perrys’ horse got out of its fence. In all of the 30-plus years the couple had been raising show horses, none of them ever got out. They talked to an animal control officer who’d contacted the couple and, in their conversation, they learned of Baker and her quest to create a horse rescue, but who had not yet found enough land.

The connection was made and Midnight’s Promise was a certainty. The Saturday campfire dinner was a way to say thank you to and honor the people who were instrumental in getting the horse rescue started, said President Deborah Baker.

There are three horses on the property that have been saved from going to a horse slaughter and one was received from animal control. Another horse belongs to the Perrys.

The rescue sits on 62 acres, about 30 of which are wooded and the rest is pasture. There’s also a seven-stall barn on the property.

Volunteer Jim Brown helps to maintain some of the property by mowing the fence line and feeding the horses. He begins each day around 7 a.m. and is usually done before the end of the day.

The retired truck driver enjoys helping. He’s a widower and his children are grown.

“You have to care for what you are doing. I enjoy it,” Brown said.

Amy Henderson was recently on the property and fell in love with a horse, Jupiter, that reminded her of her first standard-bred race horse. The Troutman resident didn’t think much about it, but couldn’t shake the feeling she was meant to meet Jupiter.

“Horse rescue is so important to the equine community,” Henderson said.

She had no intention of adopting a horse, but just got the word from the veterinarian this week and soon Jupiter will be her fourth rescue horse.

Cathy Lambert has also recently begun adoption procedures for a rescue horse. She saved Marvelous from going to be slaughtered in Mexico.

“I just couldn’t let it happen,” the Statesville resident said.

She too was drawn to the horse, a Tennessee Walker, and obeyed the signs that she should adopt. Her mother always had Tennessee Walkers and her mother’s maiden name is Walker. Lambert will take the horse home in a couple of weeks.

“There’s nothing more rewarding and humbling when you can save a creature that dealt with what they’ve dealt with,” Lambert said.

To learn more about Midnight’s Promise equine rescue, visit their website at www.midnightspromise.org for more details.

‘There were no men to call:’ Survivor shares story of his male breast cancer

By Rebecca Rider rebecca.rider@salisburypost.com LANDIS — It was only a few weeks ago that a man at the Charlotte Ride... read more