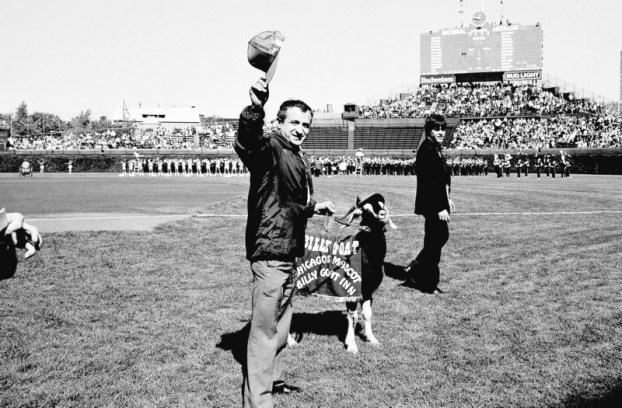 FILE - In this Oct. 2, 1984, file photo, Sam Sianis, center, owner of the Billy Goat Tavern in Chicago, acknowledges the crowd along with his goat before a National League playoff baseball game between the San Diego Padres and the Chicago Cubs in Chicago. Sianis and the goat were invited as guests of the Cubs, both being issued tickets. Every postseason run by the Chicago Cubs is accompanied by a fear of failure for its diehard fans. But young supporters of the Cubs know little of billy goat curses and botched plays, and they are confident of a World Series win. (AP Photo/File)

Curses or not, kids are confident in their Cubs

CHICAGO (AP) — Kaitlin Reap didn’t listen when her dad tried to warn her about the lifetime of misery waiting for her if she cheered for the Chicago Cubs. She rejected his invitation to share with him the joys of being a St. Louis Cardinals fan. And all his talk about curses simply guaranteed him a daughter who wants nothing to do with goats.

“I want to be a Cubs fan,” said Kaitlin, a 9-year-old third grader at Saint Andrew School, less than a mile from Wrigley Field. “I think they’re going to win.”

Cubs fans everywhere are hoping for a World Series champion for the first time since 1908, and they have a loaded team this time, one that piled up the most wins in the majors this season. But there is also fear — the kind of fear that is handed down from generation to generation in Chicago, the kind that comes from heartbreak after heartbreak, the kind that is fed by billy goat curses (1945), black cats (1969) and infamous plays (looking at you, Steve Bartman ).

Cubs fans know this feeling as well as they know their way to the friendly confines. They’ve grown up with it.

Except, that is, for the fans who haven’t finished growing up.

For Kaitlin and her schoolmates, there is optimism that the Cubs will win it all this year and, if not, they will certainly end the long championship drought by the time they leave Saint Andrew. At nearby Hawthorne Scholastic Academy, the only fear is that the principal won’t let them out of class to watch the parade they know is coming.

The way these kids see it, all those older fans are being a little silly.

“People are a little paranoid (because) it hasn’t happened, but it might be a coincidence that they haven’t won in a while,” said Max Oldham, an 11-year-old sixth grader at Saint Andrew.

All that talk about paranoia, not to mention referring to 108 years as “a while,” might have something to do with parents who have protected their children from what they know and what they have witnessed for themselves.

“We have not told him about Bartman,” said Cy Oldham, who saw what unfolded from the left field bleachers after she and her husband decided to postpone their honeymoon so they could attend the playoffs. “We try not to dwell on that time (and) it is not something we want to sit down and say, so, ‘Let me tell you how bad things used to be.’”

Addison Casavechia could not help knowing about those times, not with a first name that her parents chose because they liked the way it sounded and because Wrigley Field is on Addison Street. That might explain why the 11-year-old sixth grader doesn’t think the Cubs will win it all this year.

“I have my bets for next year because we’ll have Kyle Schwarber back,” she said of the player who suffered a season-ending knee injury early this season.

Her mother, the assistant principal at Saint Andrew, doesn’t want to see her daughter suffer. But Sarah Casavechia also sees rooting for the Cubs as part of growing up in Chicago.

“I think being a Cubs fan is like taking a leap of faith every year, it’s like falling in love,” she said. “You know there’s a chance you’re going to get your heart broken, but you do it anyway.”

That’s not to say the kids haven’t taken steps they hope might prevent the kind of misery that their parents, grandparents and great-grandparents experienced in seasons past.

Bennett Patterson, a 12-year-old seventh grader at Hawthorne, makes sure to watch Cubs games accompanied by one of the white flags with the blue W on it, the kind the Cubs have been flying for years after a win and now wave from houses and car antennas all over the city.

These being the playoffs, Patterson knows he has to take things a step further: “I wear a W flag as a cape to watch the game.”

“My grandma did it, my dad has done it and now they are telling me to do it,” he said.

Weber sees it as a small price to pay, and dismisses any suggestion that the strategy hasn’t worked in more than a century.

“It did work last year because last year they (the Cubs) got half way,” he said.

As for Kaitlin, she doesn’t believe her team is cursed. Still, she had something to say after her dad told her about Billy Sianis, who put a curse on the Cubs after the team wouldn’t let his goat attend the 1945 World Series.

Prep Golf: A different sort of win for Salisbury girls