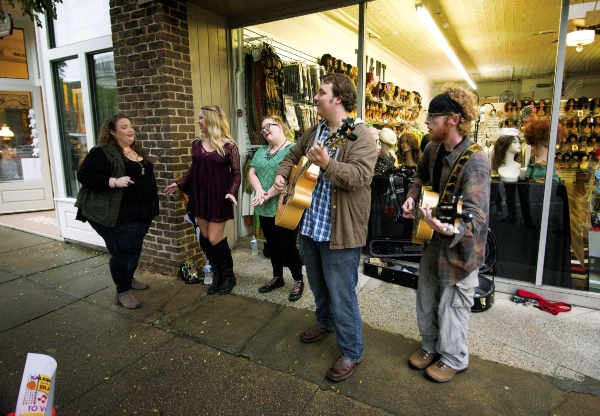 SALISBURY — Performers did not let Friday’s misty weather stop them from playing for passersby during the fourth annual Busker’s Bash.

Busker’s Bash, created by Sue McHugh, brings musicians from all over the state to play in front of downtown shops and restaurants. Attendees dropped guitar picks in the orange buckets of their favorites and the performers with the most picks were announced at the end of the night.

The top winners were Ashley Lynn in first place, Delta Holler in second and Grace & Gabe Bemus in third. All other musicians received downtown dollars.

Almost 40 performers were slated to attend and about 50 downtown stores and restaurants stayed open late for shopping and dining.

Delta Holler, a band made up of Catawba College students, belted out their soulful harmonies in front of Timeless Wigs and Marvelous Things at 100 S. Main St.

Casey Rae, vocalist, said the band formed so that she and her friends could enjoy playing music and performing together.

“We love music and we love Salisbury,” she said.

“Salisbury’s evolving into such an artsy town,” she said.

Jeff Martinez, from Salisbury, took advantage of the acoustics in the entryway to the Salisbury Wine Shop at 106 S. Main St. He said he often plays at open mic nights at various locations in the city.

Martinez said he enjoys singing and playing his guitar, but he also likes the friendships he has gained with other musicians.

“I (play) to support music and the arts in town,” he said.

Sophia Daniz sang a melody of pop songs while playing guitar on Main Street. At 14, she already has an album on iTunes called “Day Dreaming.”

She started singing professionally when she was 10 years old, and now sings at different venues around town.

Daniz is trying to get her name out there and she said events like Busker’s Bash are a great way to do it.

“I love how it gives people a chance to show what they can do,” she said.

Performers and visitors ended the night with a celebration and open jam session at Morgan Ridge Rail Walk and Brewery & Eatery.