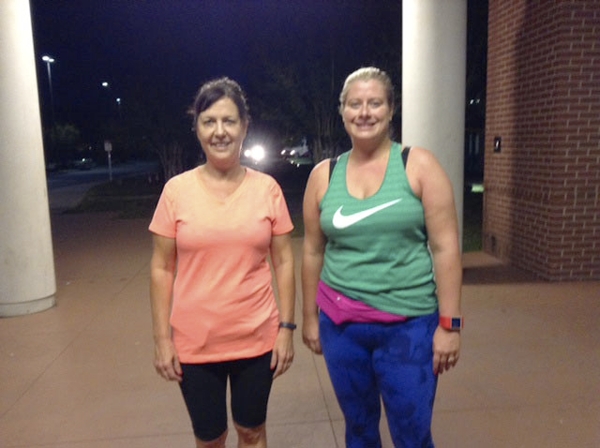 Michelle Patterson, left, and Jennifer Payne after an early morning 4-mile run that ended at the Hurley Y. Photo by David Freeze

We skipped a month on reporting about the wellness journey of Jennifer and Michelle. When we last left you in mid-August, Jennifer had slipped backwards in total weight but had joined Weight Watchers to help control her portions. Michelle had plateaued over the summer and stopped losing weight but was shaking up her exercise routine by taking strength and toning classes. Both were using running as their base exercise and were planning to do the early September Sunset Run 5K in Salisbury.

Jennifer went to the beach in August and noticed some discomfort that led to nine days in the hospital with kidney stone issues. She finally passed the kidney stone after two procedures, but much of her gained fitness was lost during the recovery.

“I ate everything that was put in front of me,” Jennifer said. “I was so stressed by how far behind I was at work. When I went back to work, I barely had the strength to walk into the hospital from the parking lot. From there, I put myself last and made sure everyone else had their needs met.”

Jennifer gained back much of the weight that she had lost and thought about quitting the program.

Michelle kept exercising, but her intensity level had waned because of a recurring back issue. She was cautioned not to exercise by her chiropractor, but did keep walking. Kettle bell classes were not as productive, and she seldom pushed her heart rate upwards with cardiovascular exercise. Major work stress returned as pumpkin season began.

“I wasn’t able to run, and stress level and blood pressure both increased, contributing to serious headaches,” said Michelle, who had a slight weight gain.

Over the last two weeks, Michelle has returned to normal and, except for an occasional foot blister, she is finding her legs again and is pushing the pace on her runs.

“I want to get faster and continue to lose weight while getting stronger,” she said. “It has been frustrating not seeing the scales go down.”

Jennifer has started walking some and has mixed in a few slower runs, but nothing else yet. Her immediate focus is on diet and the return to regular daily exercise.

Out of all of this has come a daily communication between the two that I hoped would happen much earlier in the program. Michelle begins each day with her workout, reports on it and then waits for Jennifer to send a description of her own workout later in the day.

Both of the ladies had their wellness assessment with Ester Marsh, associate director at the Hurley YMCA, this past Friday. Their stats were based on the last assessment from late March. Ester measured their inches and body fat among other things and as always provided her upbeat appraisal complete with encouragement. Michelle had lowered her body fat by 6.5 percent, with the biggest losses in the back, triceps, mid-section and legs. She was down 4.8 pounds on the scale but had reduced her fat weight by 10 pounds.

As expected, Jennifer’s overall body weight had gone up but her body fat was actually down by 1 percent. Ester encouraged her to remember that weight loss and fitness is a journey, complete with ups and downs. The biggest thing was not to give up.

Speaking of not giving up, I promised an update on Brent Parks and Norma Honeycutt. Both continue to be active and are making their own wellness a priority. Norma continues to lose weight and exercises an average of five days a week. She mixes in classes at the Y with running and fast walking.

“My body now craves exercise, especially for mental health,” Norma said. “When I feel stressed, I go for a fast walk or a run.” Norma was especially excited that she just did 25 jumping jacks in a row and reports that she has increased her fruit, vegetable and water intake dramatically.

Brent had two main goals when he took the first serious steps toward improving his health. He wanted to make his next physical a huge improvement over the last one, and he wanted to keep up with his wife in exercise.

“My doctor was happy with all of my stats after everything returned to normal. I now do most of my exercise with Wanda, which includes running three days a week, functional body class and spin class,” he said. “We also have made exercise a priority on trips. As you can see, exercise is now a part of my life.”

Brent is also using Weight Watchers to help maintain portion control and recommends it to others.

Back to Jennifer and Michelle. They are jointly committed to a bounce-back month in October. Both are busy at work, and we plan to meet at 6 a.m. for their runs.

“My main goal is to get my old mindset back. I can’t let other things get in the way of me taking care of me,” Jennifer said. “I want to work out regardless of what comes up in my life.”

With that, we will see you at the end of October with good results!