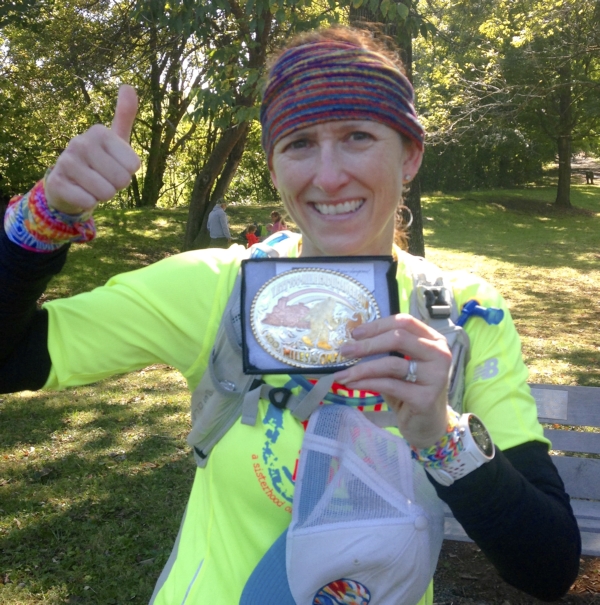 Karla Steedley as she becomes the first Rowan County woman to complete a 100 mile event at the Yeti 100 Mile Endurance Run. Photo by Caleb Steedley

“Caleb said we needed to start running, so we did a 5K in March, completed the 10K in April, the Downhill at Dawn Half Marathon in June,” she said. “Since then, it’s been one race after another with the distance gradually growing.”

Karla and Caleb Steedley will celebrate their 15th anniversary in December and have three kids: Noah, 12, Grayson, 10, and Sophie, 8. The couple met at Queens College. Caleb, who once weighed 225 pounds and is now at 165, quickly moved up to ultra-distance running. He finished his first 100-miler at Uwharrie in 2014 and recently completed the prestigious Western States 100-miler, one of the hardest races on the planet with 40,000 feet of elevation change from Squaw Valley to Auburn, California. Caleb also has completed the 48-mile Grand Canyon Rim to Rim to Rim and multiple high quality marathons.

Certainly no slouch at long distance running herself, Karla has completed 13 marathons and 11 half marathons plus a 50-miler and an 80-mile, 24-hour run.

“Caleb has been able to see my potential long before I do, so he signed me up for the Yeti 100-miler and then asked for forgiveness later, as usual,” she said. “He wanted us to finish it together.”

“It took me about an hour to convince her to go on ahead,” he said. “Karla ran the last 35 miles by herself. This race was all about her. I ended up dropping out at 80 miles. She completed the course in 28 hours and 56 minutes.”

Faced with running 20 miles farther than she ever had, Karla didn’t worry about it.

“I thankfully hit 80 miles very early in the morning when I was sleep-deprived, cold and maybe a little delirious,” she said. “I was on auto-pilot of sorts with just finishing as my goal. My watch had died, although it still showed the time but not the distance.”

Doing the math on her own, Karla said, “helped take my mind off the pain and the miles still to go.”

Karla also made new friends on the dark trail.

“We shared stories and silence, but we encouraged each other. And I prayed a lot. Sometimes, I just thought the words, and other times I prayed out load,” she recalled. “I never felt scared or thought of quitting. I thought about Caleb and my kids and my mom, who was there. There had been so many friends from home who had sent me off to do this race. There was no way that I was not going to come home with that buckle if I could help it.”

After running across the finish line, Karla’s body shut down.

“I was exhausted but ecstatic,” she said. “The pain was excruciating at times, and it seemed to disappear at others. I know it was always there but not always what I was thinking about. Minutes after finishing, I couldn’t lift my own legs.”

All three kids are into running as well.

“Grayson is on the Warriors and wants to run a 100-miler someday. He did a half-marathon at age 9,” Caleb said. “When we travel to races, the kids usually go with us. They get to see some beautiful country, meet some amazing people and learn about goals, determination and sacrifice. They have really come to love crewing for dad and, now, mom.”

Today, just a week after the race, both Karla and Caleb are still recovering. Caleb’s knee still hurts, but he is going to take some time off before he does another 100-miler over New Year’s.

“I am well on my way to recovery. The human body is a miraculous thing,” said Karla who plans to go after some more marathon goals in early 2017.

“We are thankful to have such a tight-knit running community. There is a 5K nearly every weekend and we love catching up with friends that way,” she said. “Running has given me confidence, a place of refuge, a way to be healthy and enjoy time with my family and fellow runners.”

About completing 100 miles, Karla said, “Running has taught me that we often put limits on ourselves that are far less than what we are capable of accomplishing. This was an incredible journey that I wouldn’t trade for anything in this world. I am a better person for putting myself out there and taking the chance.”

Check www.salisburyrowanrunners.org for upcoming event information. See you next week!

Mike Wilson: The Hartford and the (sigh) chair