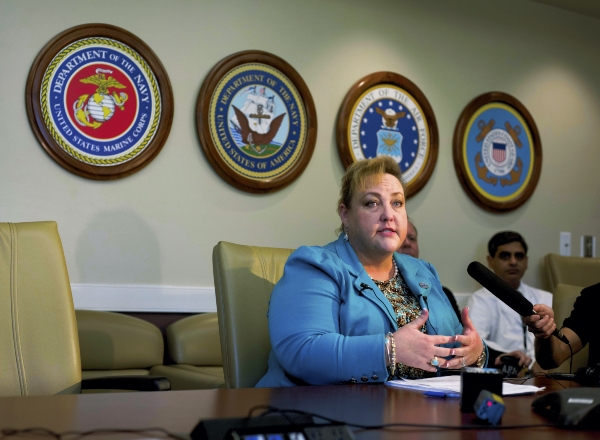 JON C. LAKEY / SALISBURY POST Kaye Greene, the director of the Salisbury VA, speaks during a press conference at the hospital facility in 2016.

SALISBURY — More employees may be removed from their current position or fired as a result of two federal investigations into the Salisbury VA.

Following the release of two federal investigations, the Salisbury VA confirmed that two supervisors were either no longer in their positions or no longer worked at the facility. During a Thursday press conference about the investigations, Salisbury VA Director Kaye Green wouldn’t confirm whether either employee was fired. However, she said more employees could be removed from their position or fired.

“I would say that there may still be future actions,” Green said.

During the press conference, Green addressed a range of questions related to the federal investigations, which found the employees falsified wait times at the directive of supervisors and that more than 3,000 people were waiting for radiology appointments at a point in 2014. She emphasized recents improvement made by the VA, characterized the investigations as “old news,” and said she’s unsure if the choice program is the best way to ensure timely care for veterans.

“We looked at all of our processes here and, to be perfectly honest, we found that we needed to make some improvements,” she said. “One of them was the process we had for enrolling new patients. So, we identified that ourselves and I believe the (inspector general) noted that in their report.”

“I have said this to staff over and over since I’ve been here: ‘We will never fudge a number here just to make ourselves better than we are,'” Green said.

The number of appointments that were within two weeks of a veteran’s desired date was included in criteria for performance reviews, according to the federal investigation. One employee told investigators that an appointment not within the two-week window was considered a “scheduling error.”

During Thursday’s press conference, Salisbury VA Chief of Health Services Ken Green described another situation that has occurred between schedulers — veterans would be offered times that were available before being asked when works best for them.

Salisbury VA officials characterized the issues noted in the report as occurring at a relatively low rate compared to the total number of employees responsible for scheduling appointments.

Problems allegedly started before Green took the reins at the Salisbury VA — Oct. 2012. However, issues noted in the two federal investigations also occurred during her time as director.

Green said there are “pockets of excellence” in the Salisbury VA and it’s her goal to raise every aspect of the VA to the standard of excellence.

The federal radiology investigation contained several recommendations that have already been implemented, according to the report released this week. The wait times investigation did not contain any recommendations. It was forwarded to another part of the Department of Veterans Affairs.

Department of Veterans Affairs representatives at Thursday’s press conference were not able to say whether there may be additional recommendations about improvement.

Often, North Carolina’s elected leaders have touted the VA’s choice program — allowing veterans to see private providers instead of VA doctors — as a potential fix for wait time woes. Green said the Salisbury VA needs community support, but she said a third-party contractor is “not the best option” for improving wait times.

Green says she often talks to veterans at events such as the regularly scheduled coffee at Thelma’s Down Home Cooking at West End Plaza. She said a majority of the comments about service at the Salisbury VA are positive, but there are occasionally some negative comments. She said the choice program may be something that’s OK as a supplement for care.